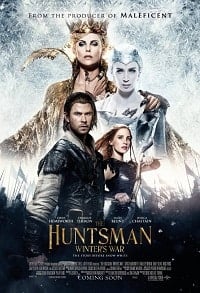 Well, that happened.  Ultra-boring with an infuriatingly misleading advertising campaign, The Huntsman: Winter’s War will likely be one of the most disappointing action films of the year.  Director Cedric Nicolas-Troyan settles for stale, re-cycled thrills in this Snow White pre(post)quel that can’t even deliver Snow White.  Three of the biggest actresses in the world are still powerless to pull this calamity back to respectability.  To call The Huntsman: Winter’s War dreary, dull, and dumb would be sugarcoating this rancid fairy tale.

Rather than setting up the premise for The Huntsman: Winter’s War, let’s start with what it isn’t.  Think back to all the stuff you saw in the trailer… a battle of wills between the witchy sisters Ravenna (Charlize Theron) and Freya (Emily Blunt) plunges the entire kingdom into mayhem, while Eric the Huntsman (Chris Hemsworth) and Sara (Jessica Chastain) must conceal their love until they can defeat Ravenna.  Well… none of that happens.

What does happen?  Ravenna is missing for almost the entire movie, Freya spends her time staring into space, and Eric and Sara walk around in the woods trying to find Ravenna’s Magic Mirror.  This story may take place in the Snow White universe, but it owes more to Peter Jackson than the Brothers Grimm.  Just imagine The Lord of the Rings, only without all the excitement, memorable characters, and imaginative action set pieces and you get some idea of how tedious Huntsman is.  In fact, director Cedric Nicolas-Troyan’s film borrows liberally from several other sources, including the new Planet of the Apes franchise, the animated classic Frozen, and everything Joss Whedon has written in the last 20 years. 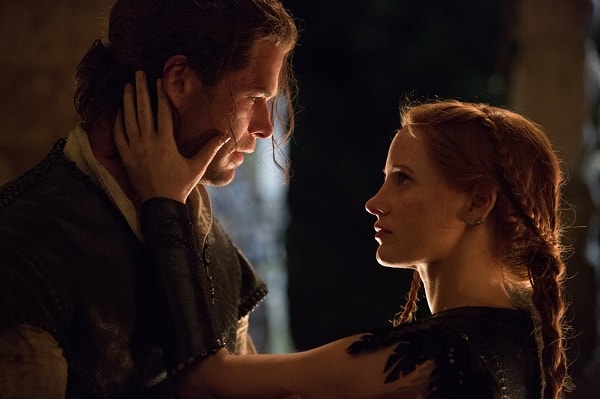 Presumably, there must be people that watch fairy tales and say, “This needs more punching!” How else to explain the existence of a sequel that no one wanted.  Were people’s appetites for vaguely Nordic rampaging not sated by Snow White and the Huntsman?  It’s mystifying that so much time and energy was spent on such folly.  Any movie that features three of the best actresses in the world in Blunt, Theron, and Chastain should at least be passably entertaining.  Alas, when they share only a handful of scenes together, it’s kind of hard to generate much dramatic tension.

Not that generating tension is high on the list of priorities for screenwriters Evan Spiliotopoulos and Craig Mazin. Surely, every line of exposition in the script must read, “Listless action ensues.”  None of these characters are even remotely compelling, as they walk around spewing idiotic dialogue that telegraphs every plot point yet to come.  “I never miss,” Sara must intone, ostensibly, each time she shoots an arrow.  While tracking goblins (??), The Huntsman uses his amazing powers of observation to deduce that, “They’re blood smells like tar.”  Gee, that random information couldn’t possibly play a role in the plot, right?  Freya coolly informs her young Huntsmen-in-training that, “Love is a trick played by the cruel on the foolish and the weak.”  Perhaps the same could be said of this movie.

To say The Huntsman: Winter’s War has a leisurely pace would make The Dude spit up his White Russian.  It’s as if Nicolas-Troyan set out to make a super-cut of all the walking scenes from The Lord of the Rings trilogy.  Several weeks ago, this reviewer took some heat for recommending the admittedly terrible Gods of Egypt.  Well, Gods of Egypt reaches giddy heights of energetic stupidity that The Huntsman can’t even imagine.  The hilarious special-effects from Gods were the result of low budgets and over-active imaginations; the murky nonsense from Huntsman doesn’t offer the slightest ingenuity or accidental inspiration.  Perhaps the only original ‘spin’ comes on the obligatory slow-motion roundhouse kick, which now culminates in a tricky neck-snap maneuver.  Yes, the neck-snap is now endorsed by Superman and Snow White! 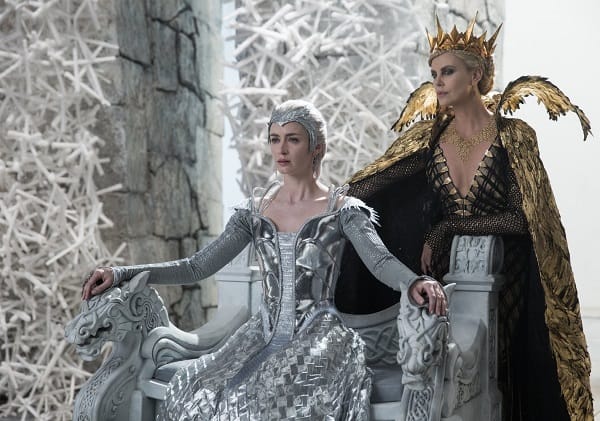 Again, the disappointment of seeing Blunt, Theron, and Chastain wasted in such dreck can’t be overstated. Theron fares the best, most likely because she has the least amount of screen time.  She kicks things into Jeremy Irons mode and has a blast vamping it up as Ravenna.  Blunt and Chastain barely manage to survive the ordeal with their dignity intact.  Hemsworth is at his Thoriest, but with an outrageous Scottish brogue to intensify the pain.  There are two dwarves (Nick Frost and Rob Brydon) to shoulder the comic relief.  Though, their humor consists entirely of ridiculing ugly dwarf women.  Hilarious, indeed.

It’s unlikely we’ll get a reprieve from unwanted, uninspired sequels anytime soon, but The Huntsman: Winter’s War makes us yearn for that glorious day.  It also makes us yearn for something fun again, with splashy colors and ill-advised ambition.  Anyone looking for adventure and excitement should pop into the theater next door and check out The Jungle Book, or anything else, for that matter.  The only cinematic sin worse than being bad is being boring and The Huntsman: Winter’s War has some colossal penance to pay.