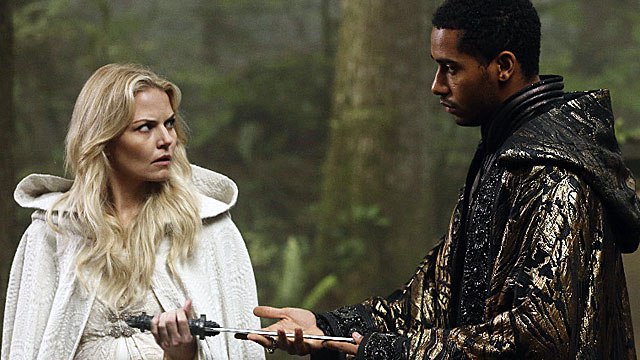 ABC’s Once Upon a Time, for all intents and purposes, shouldn’t really exist. It was tough to pitch, debuted against the World Series, and is pretty expensive to produce. Most people assumed wouldn’t last past six episodes.

Yet here we are, 101 episodes later, as the series draws 8 million viewers in over 200 countries around the world. ABC has already renewed the series for a sixth season, guaranteeing it at least another year of production. It’s a true fairytale in every sense of the word. But it’s not just the dashing prince and Kiss of True Love that have made OUAT, as fans lovingly call it, one of TV’s most surprisingly popular shows.

Once Upon a Time is a long-standing success because it’s the perfect balance between fantasy, reality and mind-bending insanity. In short, it’s basically Lost with better costumes.

When Once Upon a Time debuted all the way back in 2011, it seemed destined to fail. Co-creators Edward Kitsis and Adam Horowitz, both of whom served as executive producers on Lost, pitched the show to about 10 networks to no avail before ABC finally picked it up. It seemed like the perfect match. ABC is owned by Disney, so the show would be free to incorporate characters from the Disney family, and the Mouse would get a unique outlet to better promote their movies to adults.

Strangely, though, ABC threw the show to the wolves, pitting its first episode against the MLB World Series and NFL football. Even though the pilot managed to draw in 13 million viewers, the public was quick to ready the chopping block. “We were predicted to be the first show canceled, so we, of course, believed it,” Kitsis told The Hollywood Reporter.

But the show thrived, becoming one of Sunday’s most popular series. We’ve grown to love Emma, our literal savior protagonist, as she battles good and evil in the fictional town of Storybrooke, Maine. And those battles get pretty insane. Once Upon a Time has taken its audience on what can only be called a whirling dervish of plot twists, character shifts and inexplicable familial ties. Nothing really makes sense on OUAT if you pause to think about it. It’s a universe where Belle is married to Rumpelstiltskin, Little Bo Peep is a crime lord, and Princess Anna from Frozen taught Prince Charming how to swordfight. And Henry, Emma’s son at the center of it all, is basically related to half the people in town.

What’s amazing is that everything still seems to make sense. Kitsis and Horowitz have done a spectacular job of keeping the show relatively cohesive, even if everything seems on the brink of collapse. OUAT features dozens of characters, each with their own unique stories and relationships, and more are being added every season. The second half of Season 5 brought the Storybrooke Gang to The Underworld, which has introduced Hades, Hercules and Megara from Disney’s Hercules into the mix.

“When you create a series, you hope that you can have an idea that has many stories in it, and to actually get the chance to tell this many stories is mind-blowing and really humbling,” Horowitz told the A.V. Club.

Even with all the stories and characters, the writers haven’t forgotten major plot points, even across multiple seasons. For example, an episode in the first season involved the Mad Hatter stealing a box for the Evil Queen from the Queen of Hearts in Wonderland, who’s also Evil Queen Regina’s mother. What was in the box? Regina’s father. However, it wasn’t until the quintessential 100th episode that the show explained why Regina’s father was in the box in the first place, and yet it still made perfect sense in the overall story.

That doesn’t mean Once Upon a Time is flawless, because there are a lot of really stupid things about the series. There was the half-season Frozen story arc in Season 4, which divided the fanbase between “pretty okay” and “hate it with a passion.” You’ve got Snow White and Prince Charming, who started off as dynamic heroes but have since been reduced to stereotypical worried parents who change their mind on key issues depending on what the plot needs. There was also the failed spinoff Once Upon a Time in Wonderland, which still has a surprisingly dedicated fanbase for a show that ran for less than one season.

All the same, Once Upon a Time is a show that baffles some, delights others, and yet still manages to be a go-to show for millions of people around the world. It’s unknown whether the show will get another 100 episodes – likely not – but the ones we already have ensure its legacy as a show that is, in short, a dream come true.