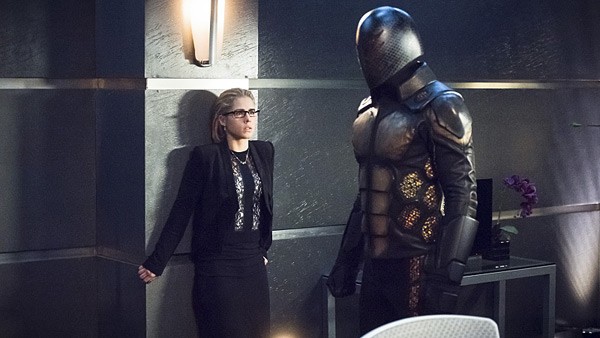 In case you didn’t realize what the title of the episode was, Felicity, Thea, Oliver, and company are right there to deliver the title numerous times throughout the hour. And, as Arrow is often want to do, it talks a lot about “beacons of hope” without really establishing any particular reason why this is a conversation again; in the wake of Darhk’s imprisonment, Arrow tries to replace the physical void Damien’s absence leaves the show with a whole lot of talk about breakups, and why what Team Arrow does really matters. Except this is really a story about an unstable woman who tries to infiltrate the technology of the 1%-ers to save herself from paralyzation – and one Arrow has absolutely no interest in developing as any kind of meaningful story.

Save for Curtis’ first run as New Tech Person on Team Arrow, “Beacon of Hope” is an hour of television flailing for purpose, shoving in awkward conversations about breakups to liven up the return of Brie Larvan, arguably the worst of The Flash‘s season one baddies. And she’s no more impressive here, even if the Arrow writers allow Brie to do more than sneer in front of computer screens: forget how boring her robot-bees-turned-stunt-double-robot creation is, this episode spends 42 minutes with a bee-based villain and can’t come up with a better pun than “beeee careful” (a pun it makes no less than four times in the same episode). The lack of inventiveness is on full display, from Brie’s punch lines, to the absolutely lifeless fighting scenes, and the thoroughly pointless flashback that continue to hold absolutely no weight of any kind, a story that only becomes more pointless on a weekly basis (this week: Oliver and Reiter stand in a dark room and fight for five seconds! WOW, thanks Arrow!).

That weightlessness is quite obviously the downfall of “Beacon of Hope” (an episode that literally sees Oliver shrug off being shot by a f*cking bullet), a feeling of thorough meaninglessness that permeates every single frame of this episode. Do I care about Laurel explaining to Oliver that he’s “going through ten different types of pain” right now? Does it matter that Curtis is being posited as a replacement for Felicity? Will we ever actually see Palmer Tech become the “beacon of hope” (there’s that phrase again) Felicity wants to turn it into, complete with faceless board members and no sense of what their business actually is (they make expensive spinal cord technology they don’t share with anyone, because it’s too expensive)? Arrow doesn’t care: as long as the conversations sound heady and everything feels appropriately melodramatic, “Beacon of Hope” is willing to ride out its poorly-constructed “good guy” mythos for the entirety of the episode, and suffers the entire way (that is, until it brings the “bad boy” Diggle brother back for shits and giggles).

Ultimately, “Beacon of Hope” can never escape its own weightlessness; and for 42 minutes, completely personifies everything that’s gone wrong with Arrow this season. Darhk’s become a silly Big Bad (here, Arrow basically copies Daredevil‘s s2 episode with Fisk, to much lesser effect), characters only seem to talk to each other about how much Team Arrow means to them, or provide a running commentary on the state of Oliver and Felicity’s relationship in any given moment – and of course, those absolutely pointless flashbacks, which through 17 episodes, have been nothing but absolute nonsense, bringing mysticism into the Arrow world in perhaps the goofiest, most thoroughly overwrought and preposterous ways possible (wow, he can’t be shot by bullets? How intriguing!). Don’t let the noise of Brie’s bees or Oliver’s sad face whenever someone remotely references Felicity fool you: there’s no excitement or meaning to be found in “Beacon of Hope”, arguably the most superficial, empty-headed episode Arrow‘s offered in this clumsy and largely ineffective fourth season.