Amazon Prime is a subscription service that lets customers use several different kinds of services for free or at discounted rates, once they have paid the subscription fee. Unlike most other streaming services, Amazon Prime also offers deals like free one or two days delivery on a wide variety of products, including everything from clothing to toys to tools to books and movies. Here are some of the other services that helped me decide to join the other 150 million subscribers to Amazon Prime:

Setting Up the Subscription

Another thing that makes Amazon Prime different is that the service is geared to attract several different kinds of customers. Customers can get special deals and information about parenting, education, or other subjects. Like most other services, there is usually a free trial period, after which there is a $12.49 per month charge.

Customers can save money by paying a yearly fee of $119 instead, or $8.99 for just Prime Video. Many Americans subscribe to at least one streaming service, often instead of cable television, and about one out of three adult consumers in the United States were signed up for Prime Video by the end of 2018.

Actually setting up the subscription is as easy as going to the Amazon.com page, setting up an account, and using the menu to sign up for the service. When using a full-size computer, the home page has several categories at the bottom of the screen that everyone should check out.

There are special discounts for some classes of people, such as students. Anyone with a school account can sign up for a free trial membership, after which the membership is only $6.29 per month with no contract or obligation.

My daughter has been using this service to get textbooks at great prices, and she also has access to video and exclusive deals. People with limited means can also get a discount on membership, as anyone who can prove the need for government income assistance can get a membership for $5.99 a month for up to four years.

Unlike other streaming services, you can have more than one person using the account at the same time. Up to three people can watch at the same time on Amazon Prime, as long as they are watching different videos, but with Prime Video, the limit is two. Also unlike other services, family members don’t each get their own profile.

Anyone using the account simply logs in on the device and watches the video. One great feature for families, and for people like me who might have young family over, is the ability to use parental controls to keep young children from watching some programs.

It is easy to use Amazon Prime Video on different devices. I have watched using my subscription on a regular large screen TV, a laptop screen, my e-reader, and my smartphone. I stay logged in and when I want to watch something or listen to music I just click on it and play.

I enjoy watching Prime Video on every one of my devices except for my computer, and that is only because my speakers are inferior. The TV is best, but with my phone and e-reader, as soon as I turn on a program the perspective changes and I have full screen. To turn off the full screen and do something else, I simply use my finger to scroll from the bottom, which produces an arrow. 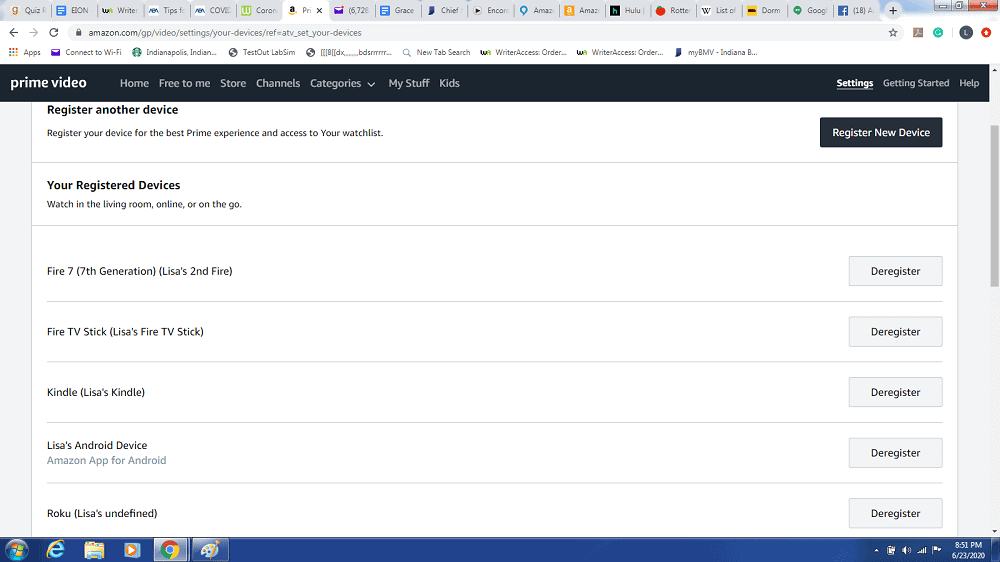 I touch the arrow and I’m back at the intro page for the show. The picture is great on all my devices, and I have used my phone to entertain a young relative with videos at stressful times.

Like Apple has Siri, Amazon has Alexa. Because of my Prime membership, I have taken advantage of some deals so that I have some extra devices, like an Echo Dot and Speaker. I ended up paying almost nothing for the extra devices because of the special offers. I use my computer to keep track of all my Alexa devices, such as my television, my e-reader, and my Echo Dot.

Instead of using an alarm clock, I tell Alexa when I want to be up in the morning and she asks if I want to use that time every morning. I can also tell Alexa what music I want to listen to and what show I want to watch on my smart TV. Before I used Alexa, my prime services were still easy to use, but having these extra related devices has made my life more convenient.

I do not miss the days of rewinding tapes. When I am watching a television show or movie and stop for whatever reason, I can go back to it in a list of other shows I want to watch. I can pick up the video even weeks later at the same place where I left off. 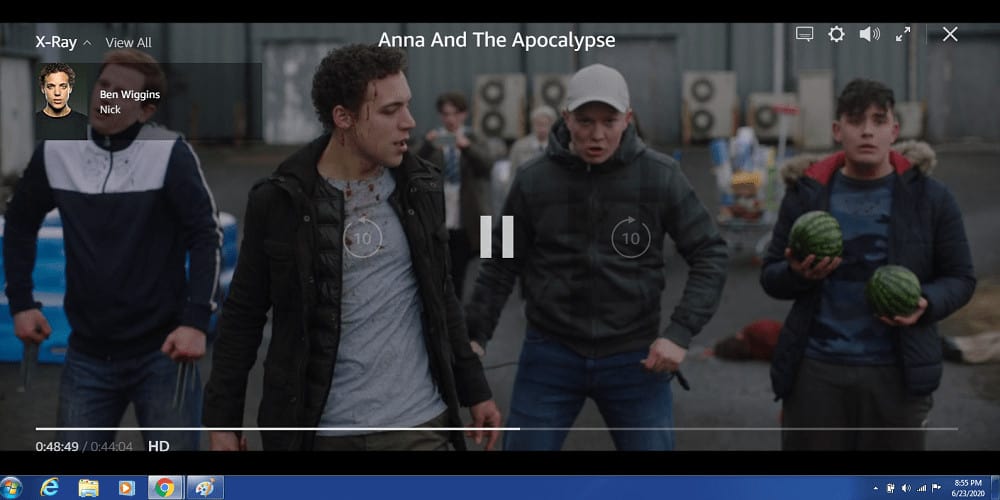 When you touch the middle of the screen, you can see a line with a dot showing where you are, and the number of minutes on each side showing how much time you have watched and how much time is left. Move the dot to the place in the show where you want to be. The same principles apply if watching television and using a remote. Overall, these features are easy to find and easy to use, even without instruction.

To search for a show, I just go to the Prime Video page. Prime Video has a pretty good idea based on what I’ve already watched what other kinds of videos I will enjoy, and I can look at my watch history. I have eclectic taste, and I have discovered many wonderful finds because they were recommended for me to watch next.

There is plenty of family-friendly fare along with classics, action, horror, and even a lot of original programming. For those who like great quality video or who have better equipment, Prime Video also has 4K and HDR capabilities. The one disadvantage may be that there is so much going on on the screen that it can be difficult to find what I want, but there is so much great content overall that I often end up watching something completely different than I was planning because I came across it by looking through the titles recommended specifically for me.

If I want, I can also buy or stream new movies and shows that aren’t yet part of the subscription service, and there is a special page for deals. If I ever run out of things to watch, there is a special feature where I can put in my favorites and get even more suggestions.

This is the one area where I feel as though there could be some improvement. If there is ever a problem with an order, I get an immediate positive response and help to make sure I either get what I ordered or get a refund. However, I have not had such strong support when it comes to technical questions.

I am not very good at figuring out technical issues on my own and have been frustrated when I couldn’t figure out how to do something before. However, there are several options to get help, including email and chat, and the Amazon page interface makes it easy to find the answers I need more often than not, whether it is to track an order or change a service. 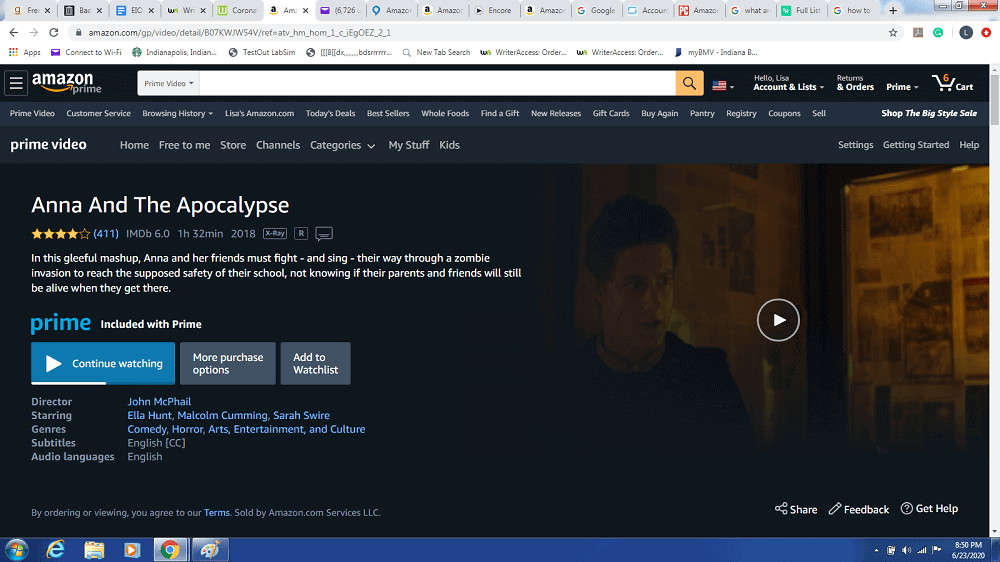 One unique feature of my Prime Video is that I have videos loaded automatically in case I am offline and don’t have anything to watch. The videos change regularly, and they are ones that fall within my interest range, even though I didn’t have to choose them. If I want to, I can download shows that I want to watch for when I’m offline.

The biggest advantage to Prime over other streaming services is that you can get all the other services for just a little more. As a single person, I save a lot of money by using the other offered services to buy other household products with free shipping. I also read free books and use my Amazon devices to listen to music.

Those are the rational reasons I chose Amazon Prime Video, but the main reason I really love the service is that I love what it offers. There are a lot of movies and BBC shows I enjoy on Prime, and I don’t feel as though I will ever run out of things to watch. And Prime makes it easy to keep track of my services, channels, and payments.

In comparison, I used to pay $8.99 a month for Starz, which had far less content that I enjoy. I have also used Hulu, which is great for television shows and has discounted prices if you are willing to have commercials. Netflix is good and has different plans that are helpful if more than one family member is watching, such as the $12.99 plan that allows 4 users at once.

See also  Do A-List Movie Stars have to Audition for Roles?

Netflix probably has a larger number of videos to watch, but when it comes to quality, I think Amazon has at least as much to offer. Hulu has original programming, but it’s very hit or miss as far as quality. They have produced one of my all-time favorite movies, but they have also produced some shows that I felt like I wasted my time on. Prime Video also allows members to add on other subscriptions, such as to Acorn TV for British television or Shudder for horror.

Overall, I would rate my Prime Video service as 5 out of 5. The price is comparable to other similar kinds of services but Amazon offers so much more with it. I have never had a day where I could not find something great to watch on Prime Video.