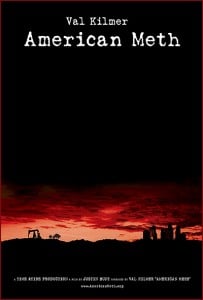 American Meth focuses its lens on frighteningly darkening view of methamphetamine, (a.k.a. meth) addiction in United States’ rural areas.  Including interviews of social workers, addicts, families, kids at risk, and law enforcement representatives, with a minimalistic narration by Val Kilmer, this documentary paints the rapidly decaying landscape of an escalating drug problem. Meth’s impacts include crime, lost youth, destruction of families and communities, leaving an indelible stain on the character of America.

In addition to the graphically shocking realities, this documentary includes prevention efforts to stave off the fast growing demographic of 14-17 year-old first time users. Audiences see not only the overwhelming realities facing state and local government efforts, but the economically devastating results of short and long term addiction.

In the film, one head of a drug prevention/addiction services program perceptively stated. “How we know the real long term impact of these addictions in ten, twenty or even thirty years from now? What will be the latent side effect to the kids of these addicts, neurologically, physically, and psychologically?”

This movie provides important educational facts, for example in an era of increasing eco-awareness the effects of meth amphetamine, (not to mention that it is a by product of a number of industrial and agricultural chemicals) on the human body, teeth, skin, brain etc. are even more graphically frightening and not for the faint of heart.

Kudos to Justin Hunt’s (writer, producer, & director)) ability to keep the interviews spontaneous and real. In many instances, use of an ultra close up camera, kept the story telling at a slowed down tempo, allowing the audience to focus on the tragedy of the addict’s message, versus the stark reality of their often decaying physical body. Several of the meth addicts interviewed could have served in a low budget zombie movie without make-up. Breathtaking landscape shots, of rural America provided well timed cinematic visual breaks to this documentary’s stark realism.

American Meth shows sophistication by avoiding, what film buffs would coin “drug induced blurred realty scenes”, (e.g. Reefer Madness, John Belushi Story, Rush, Blow, Lady Sings The Blues, The Wall) while still delivering a powerful message as to this drug’s devastation. At no point is meth romanticized, but this film also avoids any “preachiness” which could potentially create a “turn off” to an ennuied teenager. In fact, it may be the proliferation of teenage boredom, which gives this drug it’s “in.” Tragically, many of the film’s subjects claim in rural America, there isn’t a whole lot for teenagers to do…except for meth.

The last segment of the film shifts from the interview style to a “let the camera run” type modified documentary journalism, which is poignantly upsetting, and doesn’t fit well with the rest of the film. For this segment, judicial editing could have proved helpful. Also segments showing small children of meth addicts, in filth, under nourished, and unsupervised proved unsettling.

This film is well worth watching providing a cultural and educational perspective that is most likely changing as fast at the expansion of meth’s distribution and popularity.

The sad truth is that given U.S. state and local government program cutbacks, it is unlikely that the tsunami like meth tide can be stopped. This reviewer’s only unanswered question after watching American Meth was, “What took so long for someone to make a documentary about this plague on hope for the American dream?”