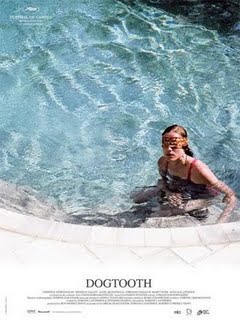 Currently touring the festival circuit is a bizarre Greek film called Dogtooth, the third feature by writer, director, and producer Giorgos Lanthimos. Its plot could be likened to that of American Gothic, focusing on a family living in a large, secluded house. The parents have never allowed their two daughters and son, despite that they have grown well into maturity. But unexpectedly, Dogtooth has very few horror elements. Although the story may be extremely disturbing at times, the film builds into a quirky portrait of the isolation forced upon the children. It’s occasionally violent, and sometimes sexually explicit, but always very interesting.

The title is derived from the myth the parents have told the children, that when they lose their dogtooth it is the sign that they have finally grown enough to leave home. The first half of the film displays much of the things the parents are doing to keep their offspring indoors, for example: teaching them incorrect definitions to words like ‘phone’, telling them that cats are bloodthirsty beasts, blind-folding and driving a woman from the father’s job to the house to ensure the one son is sexually active.

Much of what is interesting about the story is derived from the siblings’ lack of concept of life or death, as any exposure to the world has been through their parents. The writer and director has managed to express his sense of humor still – although the plot seems frightening, it has some very amusing qualities. There is a sense of sincerity in the children that makes them likable, despite their situation could easily transform them into horrible, shut-in creatures. The performances of the three actors are so childish and honest, you are rooting for them even in the worst moments.

The cinematography is also a huge highlight of Dogtooth. Scenes in the film begin with no master shot, in long takes, with slow editing moving almost circularly around the characters. Often, the frame cuts off the actors from the nose up, showing only their torsos moving around on the screen, providing the film with a very claustrophobic feel.

Dogtooth has been entered as Greece’s submission to the 2010 Academy Awards.