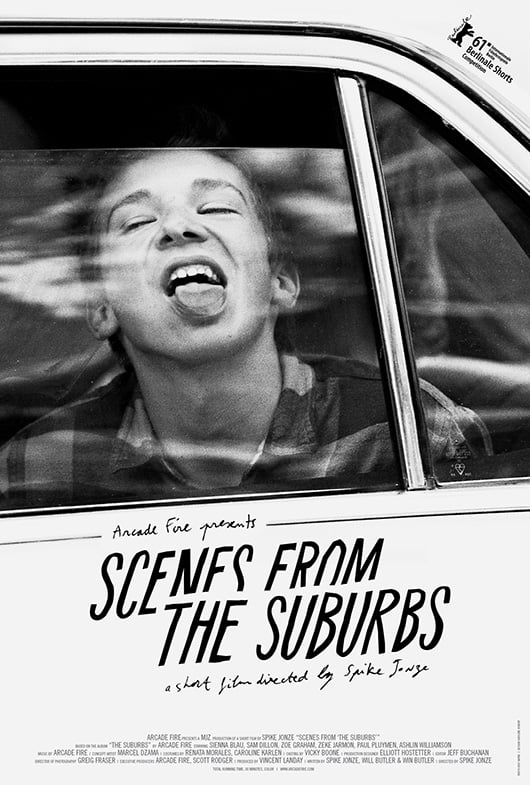 We’ve been closely following the mysterious collaboration between Montreal’s Arcade Fire and director Spike Jonze, who recently shot a short titled Scenes, inspired by their album The Suburbs. Apart from the genre (Sci-Fi), nothing else was known about the project until now. According to the Guardian, Scenes (which will premiere at Germany’s Berlinale festival) is 28-minutes long, shot in colour, and stars newcomers Sienna Blau, Sam Dillon, Zoe Graham, Zeke Jarmon, Paul Pluymen and Ashlin Williamson. The band executive produced the project with their manager Scott Rodger and the film’s concept art was created by fellow Canadian Marcel Dzama, the acclaimed illustrator who directed the animated promo for Arcade Fire’s Madison Square Garden concerts last summer.

As for the plot of Jonze’s film, the festival’s programme summary reads”

“I wish I could remember every little moment. But I can’t. Why do I only remember the moments that I do. I wonder what happens to the others.” A group of suburban youths. Back then, in the summer, so long ago. They couldn’t leave town because outside the country was at war and the military controlled life and all gateways. The teenagers wander aimlessly about town. Winter is a long way off. And love and longing and friendship still mean – everything”.

Apparently the plot synopsis is actual lyrics from an unreleased song and according to reports, Jonze’s film will be released as part of a May reissue for The Suburbs that includes new tracks and a photo album.