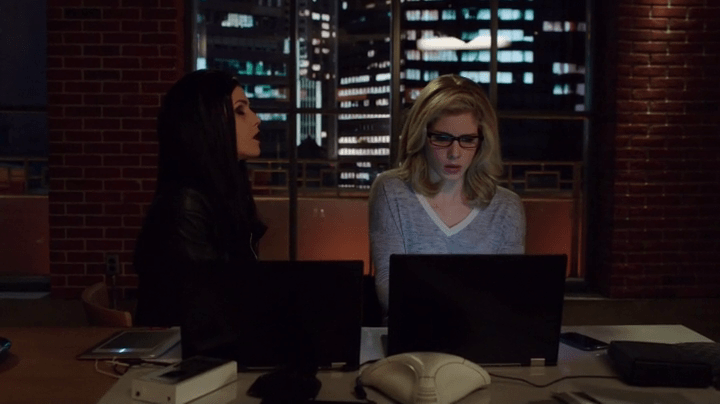 With no sight of Damien Darhk or The Island to be had in “A.W.O.L.”, it’s no surprise Arrow felt like it was getting back to basics a bit, pausing the larger, more ridiculous stories for something a little more focused, and intimate. With those elements neatly in place, “A.W.O.L.” (which I like to think stands for “Amanda Waller Out of Life” here) is able to deliver a high stakes, action-packed third act, and Arrow‘s best episode of the season in the process.

Of course, it fucks it all up when it reveals Shadowspire to be something Baron Reiter’s involved with (he’s the military guy looking for weird shit on the island) at the very end – but boy, the rest of “A.W.O.L.” felt like a return to form for Arrow. And while it lased for 41 minutes, it was sweet and beautiful: we had Felicity hallucinating (and eventually dismissing) her hacker self, Oliver getting out of his own way and letting people help him, and a complete lack of Felicity/Thea bullshit to distract from the main story (because let’s face it: their arcs have sucked this season): everything about “A.W.O.L.” just feels good, right up until the final flashback they show in “the ‘Stan”, as Diggle calls it (is that a thing people say?).

Felicity is naturally the highlight of the episode; for the first time in a long time, this is a Felicity story that’s explicitly about Felicity – something we haven’t had in a really long time, considering the last two seasons have re-positioned her as a romantic interest (both for Oliver and Ray Palmer, lest we forget), and that’s just fucking rad. Watching her come to terms with her decision to live the superhero life, and accept whatever tangential responsibility she may have had for putting herself in a position of danger, is some of the most powerful material Arrow‘s had to offer in awhile. For once, it’s not a death that inspires or illuminates someone (ok, it’s close, but it’s not!), and that alone makes the beats of Felicity’s story feel refreshing; and it allows the show to reflect briefly on how ridiculous the whole “angry hacker in love” backstory she was saddled with, before burning it down and moving on to the debut of OverWatch – which yeah, is a lame name, but whatever… it’s good to have Felicity back, reasserting her strength as a character by quickly dismissing the trauma in her life (if it was Ollie or Laurel, it would be a running story for half a fucking season… so who’s the real hero?).

And since there’s no Darhk moments or stupid fucking grave site flashbacks, “A.W.O.L.” is the first story in ages that has room to breathe. Lt. Joiner isn’t an impressive or unique adversary out of context, but “A.W.O.L.” does a great job in making him a powerful, immediate threat to Team Arrow, heightening the tension in those final scenes when he holds the leader of A.R.G.U.S. hostage.

Then he shoots Amanda Waller in the fucking head. Amanda Waller! While she’s never been the most exciting character, her death certainly has a larger impact on the TV DC (ooh, that’s fun to say) universe, and most certainly raises the dramatic stakes of the episode; whatever Rubicon is, Waller was willing to die for it, and that’s not something to be taken lightly. This story may dissolve into nonsense as it ties itself into The Island 3: The Islanding flashbacks that are happily absent in this episode – but in the moment, Arrow effectively builds something out of nothing, using her shocking death as an entry way into stories that are really about Diggle and Felicity.

Sure, it feels like Arrow is setting is up with Diggle suddenly trusting his brother (remember, he was torturing the shit out of him not long ago) and welcoming him back into his home – but there’s no denying how nice it is for Diggle to catch a break and let go of his anger a bit. Angry Diggle boxes in the character a bit, and seeing him forgive his brother and protect his family allows him to break out of the narrow path he’s been placed on this season – again, it comes at the cost of other stories like Laurel’s sudden badass demeanor on crime stories or Thea’s “anger” issues, but the Diggle story is just better, and it shows in how it brightens each story line around it.

I’m just going to try and forget about that whole “Reiter meets Andy” thing for now (because then I start thinking about that grave again, hoping that Andy’s not in it, because that would be lame), because the rest of “A.W.O.L.” is such a damn pleasure, the first episode of months where Arrow has really felt like itself. With Darhk, Reiter, the next leader of A.R.G.U.S., and local elections right around the corner, it may not be a feeling that lasts long – but for 40 minutes, Arrow felt like season two-era Arrow again – and man, it was beautiful.