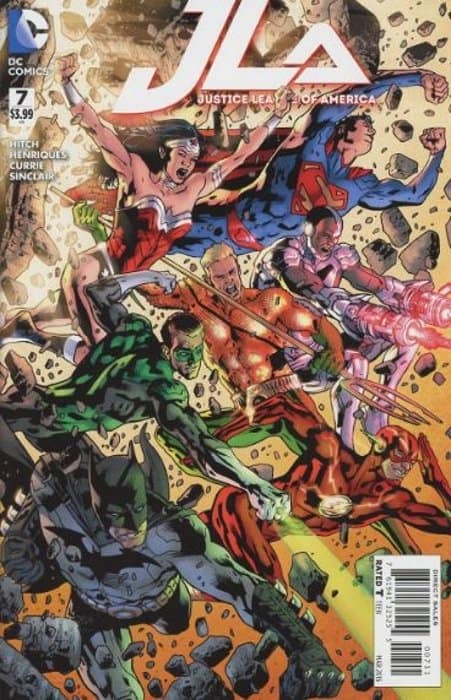 Such are the words of the so-called “Sun god from Smallville” to the similarly hailed “Sun god of Krypton” in Bryan Hitch’s Justice League of America #7. Such is surprisingly insightful on the part of the former. Despite the seemingly simplicity of the word and its ubiquitous usage in the parlance of the religious and irreligious alike, few ministers or theologians, let alone laymen, can accurately define the meaning of “god.”

Comic book writers and readers in particular often come off as quite confused by the question.  A common answer is to treat godhood as a particular power-level or power-set, such as sky-father strength or immortality. Clearly neither is what Superman has in mind as he proclaims his atheism with regards to Rao.  With respect to strength, the latter is to Superman as Superman is to man, and, as is explained in this issue and last, by leeching the life of his followers is effectively everlasting.

Another approach, metatextually and in-universe, is to define “gods” mythologically, attributing godhood to any individuals, whether fictitious or factual, who fill the same roles that ancient pantheons once had in the popular imagination of contemporary culture. The Justice League themselves have often been written as exactly such (Morrison was very explicit about doing so during his run on JLA). This too cannot constitute Superman’s usage, as stories regarding Rao had been passed down for hundreds of millenia.  Surely, more Kryptonians shared stories of Rao than Earthlings myths of Zeus.

According to extensive anecdotal evidence, the most common current definition of “god” is any being that is the object of worship. The notion of supplication as the source of godhood has been an increasingly popular concept in culture, from Peter Moynaeux’s Black and White to the 2010 remake of Clash of the Titans. Again, Rao certainly qualifies as an object of worship with billions of disciples, even deriving his power through them. And yet, knowing such, still Superman states, “You’re no god.”

Who then is Superman’s god, that Rao is nothing but a devilish deceiver in Kal’s eyes. On a literal level, he’s been written as alternatively Protestant (particularly Methodist) or Raoist – but Hitch here seems to be suggesting a somewhat different theological adherence, less literal, though no less true to the character. As Hitch write him, Superman’s trinity is “Truth, Justice, and the American Way,” with an emphasis on Truth. Like Plato’s Truth, Goodness, and Beauty, these three virtues constitute for Superman the ends in themselves which need no further justification or utility.

Rao is no god not because he lacks power, immortality, or worshippers, but because he achieved such through a lie, however benign and seemingly justified. Superman even grants that Rao’s deception “saved Krypton when it would have torn itself apart in rage and fury,” and that the false god “ushered in an age of reason” that started Krypton’s scientific advancement. Moreover, Superman doesn’t even deny that Rao’s plan to harvest Kal’s cells and transform the whole of humanity into Kryptonians would be of benefit to billions, costing them mere days, but conferring years of health and happiness, freeing all from despair, disease, and dearth.

Superman is here not unlike Rorschach, were the vigilante going up against Ozymandias and Dr. Manhattan both rolled into one. Whereas Kovacs famously quoted, “Never compromise. Not even in the face of Armageddon,” Kal for all intents and purposes extorts, “Never compromise truth for lies, justice for injustice, not even for the promise of paradise.” In making this his message, Hitch demonstrates that he understands the essential nature of the character as well as any writer ever has (save perhaps Morrison alone).

Moreover, Hitch cleverly subverts the Christ motif common to so many Superman stories. Hung upon a crystalline cross for the entirety of the issue, the imagery is certainly present. However, when told that by sacrificing his life, by giving body and blood no less, he could confer salvation and blessings to all mankind, Superman is decisive in his determination not to die, not to lay down his life for the world. It’s perfectly consistent with his moral code; the Truth and Justice for which he fights a never-ending battle are of a more infinite importance than any finite lives. Such is surely why he became a reporter.  But it’s a brave and refreshing take on the Man of Tomorrow nonetheless, and one which Hitch should be applauded for.

Both Geoff Johns’ Justice League and Bryan Hitch’s Justice League of America are currently covering the same characters and the same concept, namely godhood. Yet for such seeming similarity, the two titles differ greatly. Admittedly, Hitch’s opus lacks the continuity-wide consequences and cinematic set pieces, or even the fun and excitement of its counterpart. But it’s certainly meditative and demonstrates an acute understanding of the characters. Johns, Morrison, and many others have asked the question: what makes them gods? Hitch raises as much, but answers a more interesting inquiry: what makes them good?