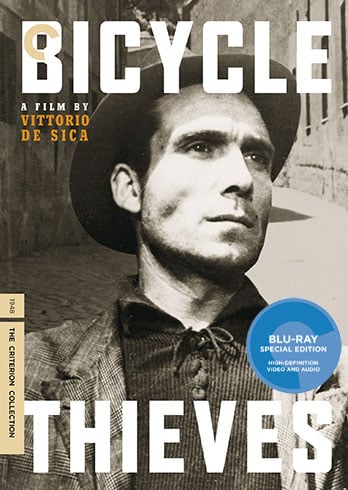 It is almost impossible to overstate what Vittorio De Sica’s Bicycle Thieves (1948) has meant to international cinema. The film is surely one of the most influential movies ever made, coming out of a movement—Italian Neorealism—that has had far-reaching and monumental repercussions through the course of the medium’s post-war history. Looking at it again, it’s easy to see why. Some of the historical immediacy may have dissipated through the years, but the film’s emotional poignancy, the strength of its performances, its use of authentic locations, the sparse yet engaging narrative, and De Sica’s precise direction have not withered in the least.

As a popular actor, De Sica had appeared in a number of films prior to directing Bicycle Thieves, and had directed several other features before this as well, including the very good and similarly Neorealist The Children Are Watching Us (1944) and Shoeshine (1946). Along with compatriots Cesare Zavattini, Luchino Visconti, and Roberto Rossellini, De Sica was taking cinema to the streets, the streets of war-ravaged Italy. Aided by lighter cameras, faster film stock, and surroundings that, while shattered, were nevertheless invaluable backdrops, these filmmakers were breaking from glossy Hollywood escapism and Italy’s own prestige “White Telephone” pictures of the 1930s and early 1940s. 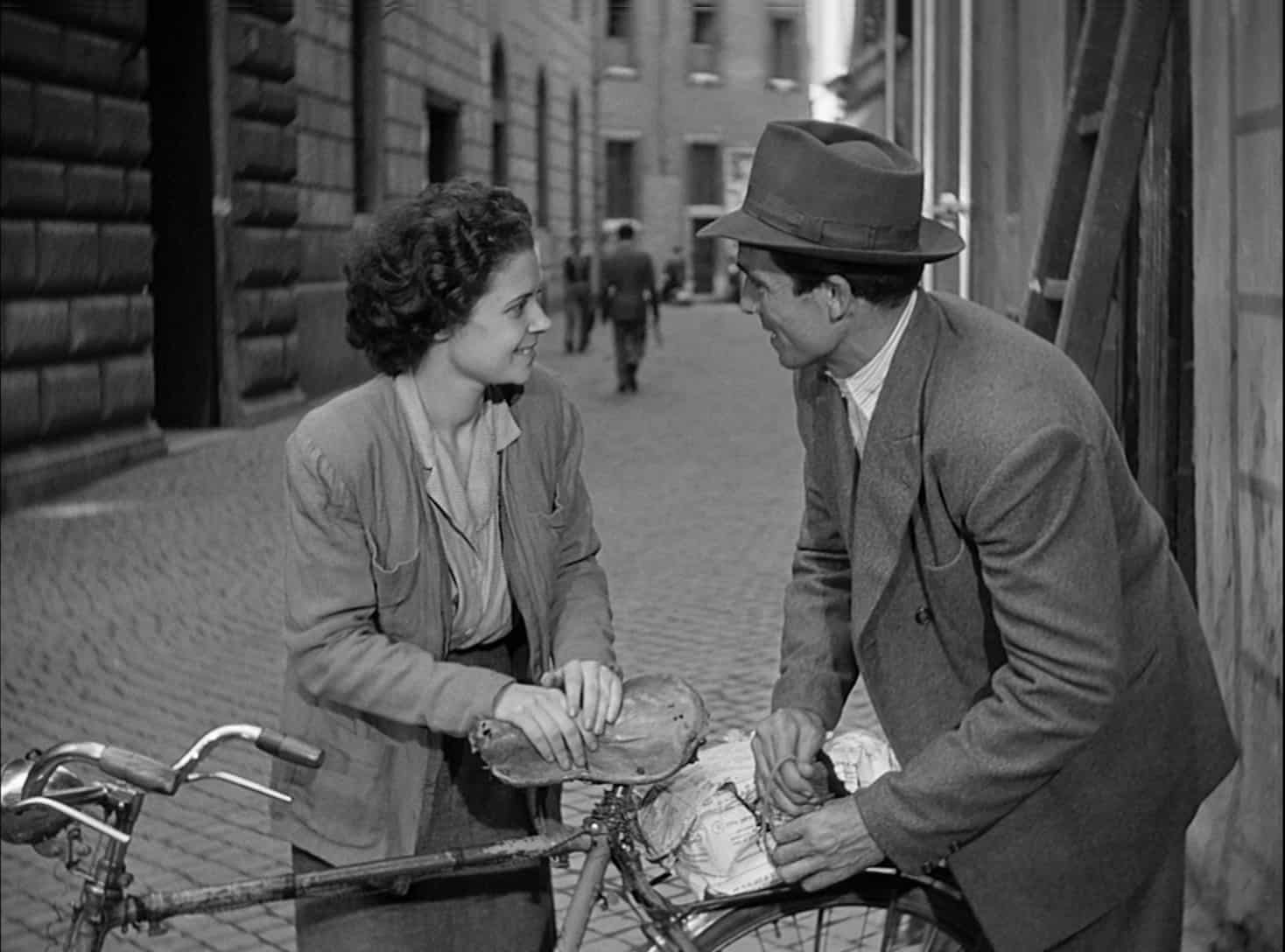 De Sica’s later Umberto D. (1952) is probably the preeminent example of Neorealism’s tendency toward subdued and prosaic narratives, stories purposely drained of any overly or unnecessarily dramatic action, but Bicycle Thieves is also exemplary of the approach. At the most, the film is about a man, Antonio (Lamberto Maggiorani), who has had his bicycle stolen. He must get it back; his job and his family’s livelihood depends upon his mobility. With young son Bruno (the scene-stealing Enzo Staiola) at his side, he searches the streets of Rome for this bike. At the same time, however, the film could just as easily be viewed as an examination of father/son relationships, patriarchal societies where men bear severe familial responsibility, or as a general commentary on Italy’s socioeconomic condition during this turbulent period.

This last consideration is in large part emphasized by the number of scenes portraying swarms of men similar to Antonio, also on their bikes, trying to make a living and struggling for their very existence. He is not alone—this is the state of a nation, not of one man. As the film’s translated titles alludes to, the titular incident depicted in the film is collective. Originally released in the United States as The Bicycle Thief, the literal, correct translation of Ladri di biciclette—the plural Bicycle Thieves—points to the fact that the movie is not so much just about Antonio or just about the thief who steals his bike. It is about the broader masses, all going through the same thing. Furthermore, it points to the indistinct designation of just who the true thief of this particular film is.

De Sica quickly and effectively establishes Bicycle Thieves’ atmosphere of shared desperation. As a somber tune plays over the opening credits, a gathering of mournful men emerge from every corner of the city. They line up for potential work without ever knowing their chances for day-to-day employment. A foreman calls out for “Ricci,” but no one responds. The camera tracks an anonymous figure until he finds this Ricci fellow, our protagonist, who isn’t even paying attention. While others want so badly to do anything that yields the smallest amount of pay, Antonio is drifting off, daydreaming. His irresponsible, immature nature is suggested throughout Bicycle Thieves. He pouts, his temper is at times outrageously erratic, his wife, who sells the sheets he sits on, is often the first to take action, and even young Bruno acts more sensible and mature in certain situations. 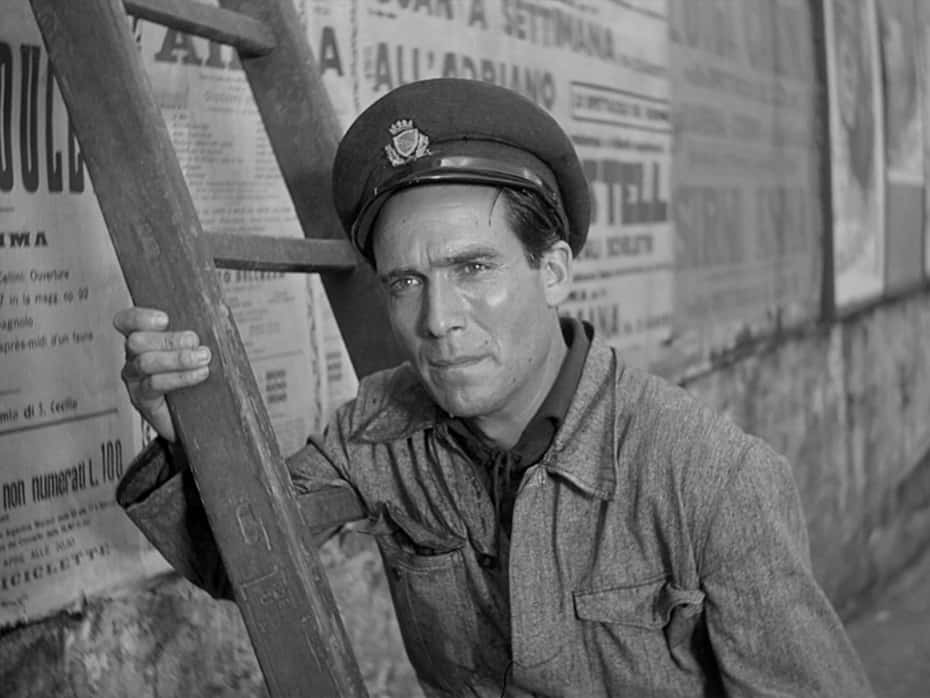 Bicycle Thieves also moves quickly in setting up a formal choice common throughout the Neorealist movement, that of the medium to wide shot and the long take. So championed by critic and French New Wave father figure Andre Bazin, this visual strategy added to an unmediated realism, a directorial reserve that, as viewed by Bazin, allowed for cinema to achieve its utmost power: to unobtrusively capture human experience and behavior. Bicycle Thieves does indeed present a rather objective view of action and of character. Again, as the unclear “thief/thieves” of the title alludes to, an immediate passing of judgment with concreteness of character is not this film’s goal.

Among the film’s most outstanding moments is early on when Antonio and his wife, Maria (Lianella Carell), hawk their bed sheets in order to buy the bike. It is sad to begin with, just in the fact that they have to do it, but to add potent yet subtle emphasis, De Sica keeps the camera at a crucial distance, just far enough back to see the tower of similarly bundled sheets—rows upon rows, shelves upon shelves of sheets, symbolically the last resorts of so many. Not long after this is the first day of work where, in the Ricci house, Antonio and Bruno get ready for the day. As the two dress the same, pack the same lunch, put their sandwiches in the same pockets, a terrific paternal dynamic is established. It is also an extraordinarily pleasant scene, one of only a few from here on out, where Antonio and Maria joke around and Bruno, wide-eyed and eager, aggressively cleans the deified bicycle, taking a moment to humorously note that the seller damaged the bike and he would have said something about it (again, there is a questioning of Antonio’s assertiveness). 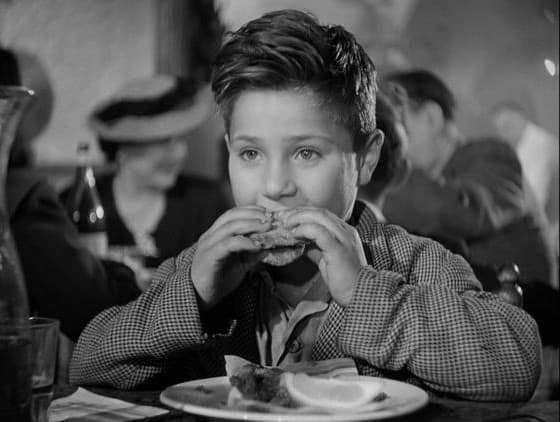 So many noteworthy scenes take place throughout Bicycle Thieves. There is the policeman brushing off Antonio’s distressed request for help (“It’s just a bike,” he says), and the scene where Bruno falls unbeknownst to Antonio and when his father asks what happened, the boy angrily, accusingly, lets him know that he tripped. The chase after Ricci thinks he has spotted the thief is again played in long shot, avoiding the easy dramatic tension. At the same time, De Sica allows for an extraneous though naturalistic scene as Bruno urinating on the wall and getting scolded. Before the conclusion of the picture, though, there is an aside for one of the greatest moments in all of cinema. Exhausted, defeated, and in an attempt to make up for reprimanding him earlier, Antonio proposes to Bruno they go get lunch, which they do. And it is a magnificent sequence. Bruno takes a sip of wine, munches on a mozzarella sandwich and is in a perpetual state of bemusement; he is bemused by Antonio, by the wealthier family next to them, and by what he and his father have just been through. This is a magical scene and perhaps shows better than any other the enormous acting talent of this young boy. It is also a quintessential moment of characteristic Neorealist digression. The little moments in life, the details, are where these Italian filmmakers found and conveyed so much.

Then there is the end of Bicycle Thieves, when Antonio attempts to steal the bike of another. It is an awful decision, seemingly inevitable, that goes right for the heart. Caught in the act, the tearful, humiliated Antonio walks through the scornful crowd, Bruno, as usual, by his side. It has been a terrible series of events, but there is hope. Bruno reluctantly, hesitantly, reaches his hand up and grabs his father’s. There is no bike, no job, but this family will persevere. 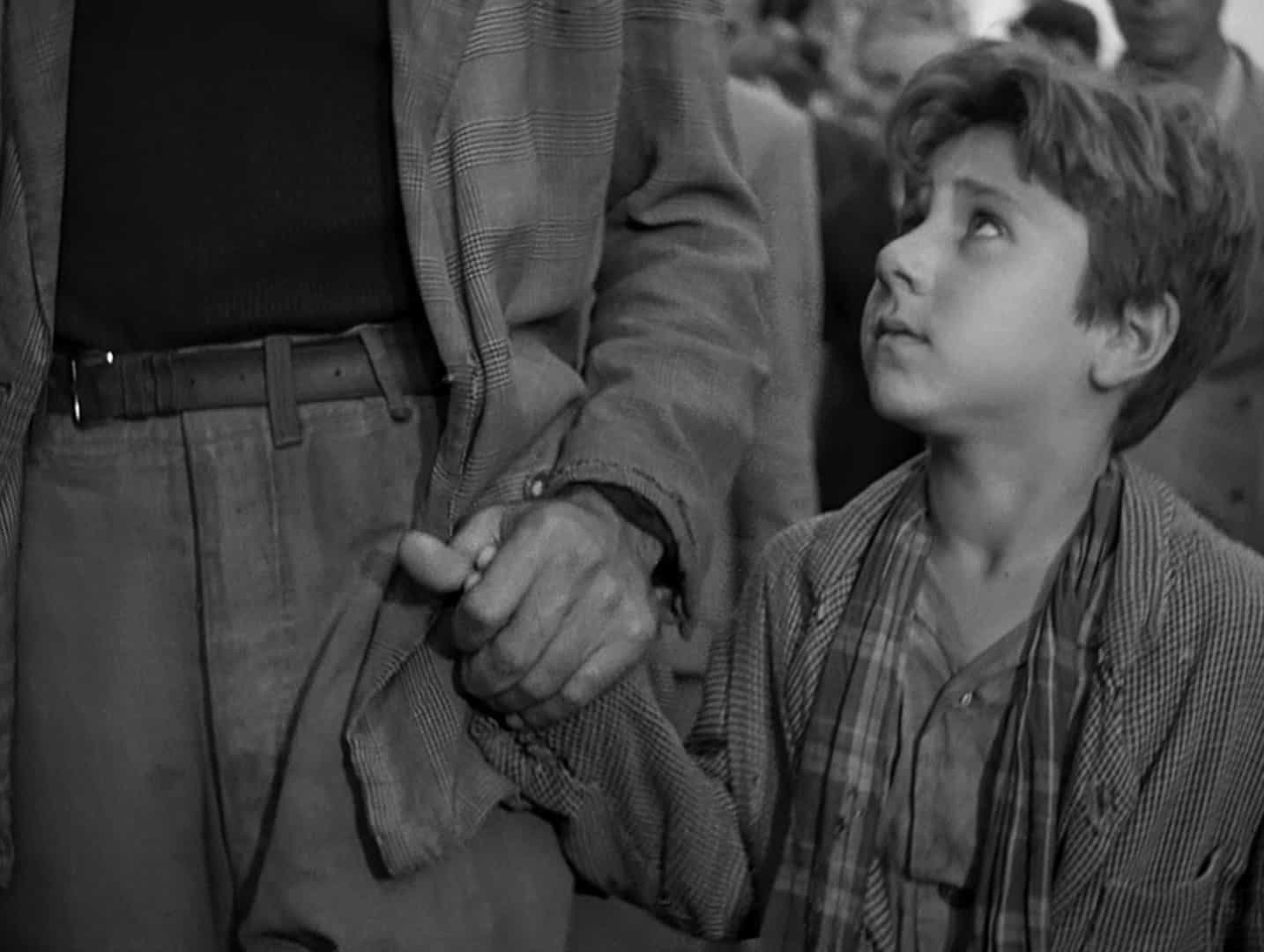 As honest as the psychic when she tells a customer having woman troubles, “You’re ugly. You’re very ugly,” Bicycle Thieves is a brilliantly genuine film document. Yet its simple story, nonprofessional actors, and location shooting should not detract from the fact that this film was by no means an amateur production. Bicycle Thieves had a reasonable budget, multiple cameras, a rain machine, several sets, and, as noted, De Sica was himself a well-established figure of the Italian cinema. The scenes and emotions expressed, raw and realistic though they are, were nevertheless captured through smoothly mobile camera maneuvers and beautifully lit, carefully arranged compositions.

While perhaps still with the best of intentions, the latter period of Italian Neorealism showed its cultural initiative giving way somewhat to a more facile, aesthetically-driven aspiration. The movement had become an explicitly stylistic ploy more than a vehicle for sociopolitical exploration. Still, history has judged such films, of which Bicycle Thieves is an excellent example, as hugely significant and inspiring, which they were and still are. Why this film in particular is so great has to do with the combination of its classically Neorealist features and the skill of a competent group of filmmakers. The end result is certainly one of the finest films of all time.