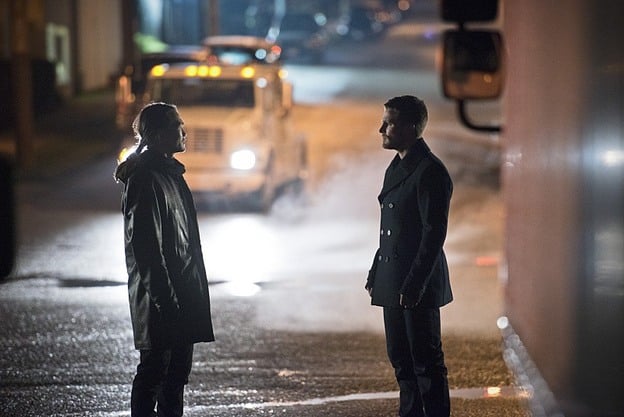 Thematically, “The Offer” is the most consistent episode of Arrow we’ve had in awhile. With a lot of truth out in the open, and motivations coming to light, there’s some room for Arrow to wiggle out of the crawl spaces it wrote itself in during the first half of the season, and begin to work out what this clusterfuck of a season actually means. Does that lead to any interesting moments of discovery? It certainly does, as Oliver considers the offer from the Head of the Demon to take his place, and other characters like Laurel and Malcolm try to make things right with their family: but again, Arrow‘s tendencies to throw an extraneous layer of superficial dramatics on top of everything clouds the strong material.

The most frustrating of this all continues to center on Oliver – and I’m not even going to talk about the Hong Kong story, which has devolved into a mess of confusing “crowded street” scenes and unnecessary reveals attempting to retcon major bits of Arrow’s backstory (Shado lived? What the fuck?) . In “The Offer”, Oliver begins to wonder what his true mission is as the Arrow, and whether he’s been affected by this all… for about fifteen minutes, before it moves onto the next stage, where Ra’s adopts the identity of Arrow in order to force Oliver to adopt the identity of the League. There’s some talk about what Oliver does and why he does it – and in those moments, Arrow‘s as strong as its been this season, returning to the moral conflicts of season two without the convoluted dramatics around it to cloud the character exploration.

Unfortunately, that gets ruined by Oliver’s “conflict” over Felicity, which has become the second-most tired plot of the season (first place goes to Laurel being told she sucks as Canary, and third place to Thea’s loyalties regarding her father). Oliver just can’t let Felicity be happy with anyone else, which turns half of the episode’s central conversation into a petty jealousy tactics, all while Felicity pours her heart out and tells Oliver that yes, she would be with him if he would’ve let her, but he didn’t, so it’s time for him to move on. The thing is, it does this in service of making a Felicity a device for both Oliver and Ray, bouncing back and forth between the two without a ton of informative scenes into the mindset of the character herself, only her reactions to the love-sick men in her life. This is not so interesting, stories that are less about Felicity than having a pretty woman next to our heroes for the sake of a swelling score and some teary-eyed moments before big action sequences – and that’s never been Arrow‘s strong suit, nor will it ever be.

“The Offer” does benefit from the increased presence of truth between characters – even if that leads to a lot of “Wow, Laurel sucks as Black Canary”, we get moments of honesty from people that are long overdue. Maybe Thea and Roy can finally be together without so much nonsense, and the two can morph themselves into a spin-off worthy (just kidding!) Glade-saving duo; and maybe under the wing of Nyssa, Laurel can finally find some consistency in her fighting scenes (look at her kick ass! Wow, she got her ass kicked! Damn, she murked that guy! Holy crap, she’s going to bleed out!). More importantly, we see Oliver (albeit briefly, before starting more beef with the League) consider his own power, understanding its limits in Starling City, and examining whether he wants to be a superhero who protects a city, or attempts to protect the entire world. I wish there was more of this, and less of Quentin rejecting the Arrow yet again (even if it was for good reason; it’s just dumb, though) and Malcolm breathing: the less convoluted Arrow is, the easier it is to find its way from point A to point B with some grace.