On the latest Ash vs Evil Dead, Ash and the Ghost Beaters are one step closer to the infamous Evil Dead cabin that started it all, but first they have to make another bloody pit stop. Last week found Amanda (Jill Marie Jones) finally teaming up with Ash (Bruce Campbell), Pablo (Ray Santiago), and Kelly (Dana DeLorenzo) after her previous travel companion Ruby (Lucy Lawless) “died”. Of course, anyone with a rudimentary knowledge of storytelling and how TV shows work could’ve guessed that the reports of Ruby’s demise had been greatly exaggerated. Sure enough, this week’s episode, “Fire in the Hole”, finds Ruby rising from the ashes like a phoenix, sans clothing but seemingly unscathed. But Ruby is an afterthought this week, as the bulk of the episode is set at the campground of some kooky militant survivalists. Ash is acquainted with one of their ranks, a man named Lem (Peter Feeney), and plans on stocking up on some of the militia’s weapons before he and his new compadres head to the cabin. Unfortunately, Lem has been possessed and is making mincemeat of the survivalists. In the process, Ash and Amanda get handcuffed together and tossed into a bunker with Deadite Lem while Pablo and Kelly fend for themselves.

The most refreshing element of “Fire in the Hole” is that the showrunners finally give Jill Marie Jones something to do, and in a pleasant surprise, she and Campbell have great chemistry together. The two of them handcuffed together causes Ash and Amanda to have to work in sync, and director Michael Hurst stages a great action sequence near the end where Campbell twirls Jones around while they battle Lem, as if the pair were engaged in a show-stopping tango. While it seems unlikely that Amanda would be ready and willing to smooch Ash after such a short time together, Jones sells the scene well, and her ability to laugh off Campbell’s terrible, non-stop pick-up lines is enjoyable. 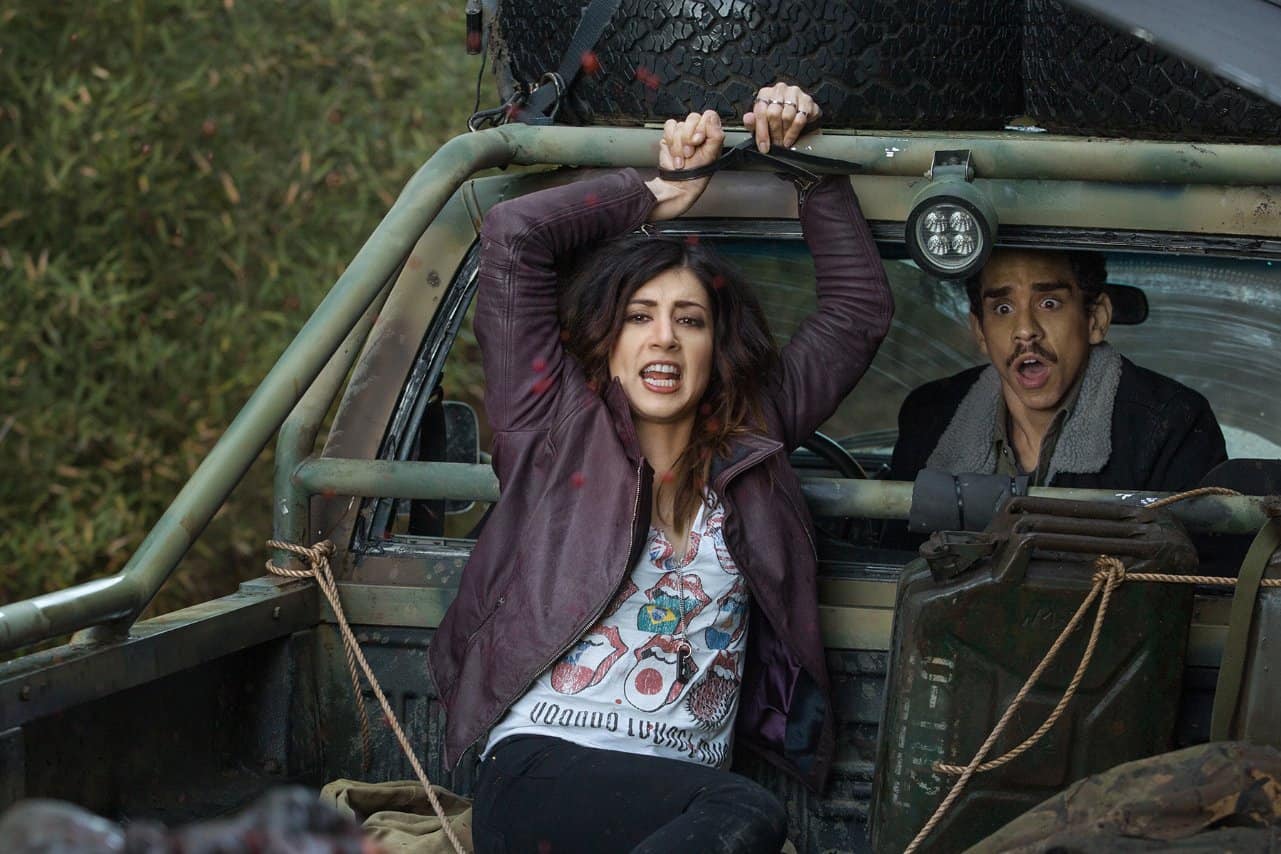 Not so enjoyable is the flat humor that lands with a thud through the episode. For some reason, episode writers Sean Clements, Dominic Dierkes, and Ivan Raimi decided to add as many jokes as they possibly could, and nearly none of them work, save for a moment where Kelly tries to look on the bright side and suggests that, instead of leaving a trail of bloody bodies in their wake, they’re actually helping “keep Michigan moist.” There’s also some tone-deaf recapping going on, such as when Kelly feels the need to announce to the group everything that she’s been through so far — “my parents died, I got possessed!” — as if her companions wouldn’t be aware of this already.

As for the militia Ash and friends are up against, they’re probably the most sanitized, TV-friendly group of right wing lunatics you’ll ever see. Sure, the Ash vs Evil Dead showrunners probably didn’t want to fill this episode up with racist jackasses spouting horrible mantras, but the way the survivalists are portrayed here rings far too false, even for a show where demons and crawling sentient hands abound.

For his part, Campbell’s Ash continues to show growth as a character. After delivering a touching but awkward speech (a speech he ends with “Amen”, as if it were a prayer) Ash vanishes when his friends’ backs are turned. He doesn’t want them to get killed at the cabin, because, as he puts it earlier in the episode, everyone he cares about dies there. Speaking of the cabin, as uneven as “Fire in the Hole” might be, it redeems itself nicely with its final scene, where Ash’s crawling severed hand makes its way up over a ridge in the woods, right towards that iconic cabin from the Evil Dead films. There’s an undeniable nostalgic thrill of seeing that location again, and the prospect of Ash returning there after all these years is too good a concept to pass up. “Fire in the Hole”, like much of Ash vs Evil Dead, feels like a stepping stone episode; it’s just there to get us somewhere better. Hopefully the destination will be worth the journey.