Emma Watson (“Harry Potter’s Hermione) recently commented that “…in a new interview on the BBC’s “Friday Night with Jonathan Ross,” the 19-year-old revealed kissing Rupert (Grint), who plays teen wizard Ron Weasley, was just about the most uncomfortable filming experience she’s had in her career so far.”  Emma commented: “We did the kiss two weeks ago and it was the most horrible thing I’ve ever had to do…There are millions of girls out there who would probably chop their left arm off to kiss [Rupert], but it just felt like incest. That’s the only way I can describe it.”  I guess thats what happens when you spend “…half of (your) life playing Hermione Granger alongside Daniel Radcliffe and Rupert Grint in the “Harry Potter” series.”
In an interview with FHM magazine “before he filmed the love scene with Watson…(Grint stated) “I’ll be honest with you: it’s not something I’d say I’m dreading. Emma’s a pretty girl…As for who has the worst crush on her – me or (Daniel) Radcliffe – I’d rather not say.”  However, after filming the kissing scene, he confessed to sharing Watson’s awkwardness by stating “We’ve known each other for 10 years so it was a bit like kissing my sister.”

A Rose by any other name.

A photo has appeared in the press that was taken at the “Transformers: Revenge of the Fallen”  premiere.  The picture shows Megan Fox, walking the red carpet, with her back turned to small boy presenting her with a rose; the look on the kid’s face is the saddest look of rejection ever recorded.  Fox explained the situation thusly:  “There were, like, 80 million people everywhere. It’s dark, all I see are flashes,” she says. “Everyone’s yelling different things … and I didn’t know that was happening.”  She was frank about her sadness at the situation:  “If you know his name, I will send him a personal apology,” she says. “I’m horrified. I would never do that…”I’m sorry, sweet boy,” she goes on. “I would never do that to you, and I would gladly accept your rose if I see you again.”
This situation is an excellent example of how in the digital age, one photo taken from one angle at just the right instant can make someone look like an insensitive jerk.  We are not privy to the photo’s context, we do not see the blinding glare of the paparazzi’s photo onslaught; instead we are seeing a sad child.  I’m sure Megan kindly signed many autographs and posed for fan photos.  I recently saw a video of Johnny Depp either entering or exiting the “Public Enemies” premiere on “hollywoodtv,” the Youtube channel of paparazzi footage.  The crunch of screaming fans trying to get at him was overwhelming, on the verge of a riot.  People need to calm down with everything surrounding celebrities, including rushes to judgement.  But Megan Fox’s apology seemed genuine and sweet. 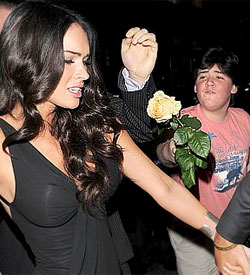 “Asteroids” movie:  Is this a joke?

I read this on various movie news sites, and assumed it was a joke or rumour.  However, I found a confirmation by “Variety” and was shocked .  “Universal’s won the bidding for feature rights to the vintage Atari vidgame “Asteroids” and set up the project with Lorenzo di Bonaventura.”  That statement can stand alone, however it gets better.  “Fox and Sony were also bidders on the project.”  There was actually a bidding war!  Multiple executives simultaneously thought that this “2-D game” from “1979”  was just crying out for a big-screen treatment.  Universal “has assigned Matt Lopez to pen the script. His credits include “Race to Witch Mountain” and “Bedtime Stories.”   Both of these films were actually guilty pleasures for me; the former did a good job at combining a sense of silliness with action.  Producer di Bonaventura was involved with the latest Eddie Murphy bomb “Imagine That” and the “upcoming “G.I. Joe: The Rise of the Cobra,” which has been getting some pretty bad advance buzz.
But I still fail to see how “Asteroids” can be adapted into anything entertaining as a motion picture.  Do you?  Has the world forgotten another 2-D video game adaptation, the excreable “Super Mario Brothers”?  Has there ever been a good 2-D game adaptation?

My Sister’s Keeper includes a performance not to be forgotten

In a recent viewing of “My Sister’s Keeper,”  I found myself blown away by star “Sofia Vassilieva…(she) had no doubts about the physical and emotional challenges of playing a young teen dying of leukemia.”  As preparation for the role,  “the 16-year-old was required to shave her head and eyebrows for the role which prompted the original actress in the part, Dakota Fanning, to drop out of the Nick Cassavetes film.”  She stars on the TV show “Medium,” and performed in the show simultaneous to filming the movie.  “When she filmed the TV series, the newly bald actress had to wear a wig made out of her own hair. But she still got both jobs done without a glitch, although she admitted to occasionally crying uncontrollably on the set of My Sister’s Keeper.”  I agree with Canada.com’s assessment that:   “There’s no doubt her part in My Sister’s Keeper has elevated her to another level, and there’s even talk of an Oscar nomination for her role.”
She had that magnetism onscreen that makes it hard to take your eyes off her.  She showed the pain of the cancer through her heavily expressive eyes.  There are few teenage actresses that could do that role without succumbing to melodramatic phoniness.  The climax of the film is the only time that I have seen virtually everyone in a theatre crying.  It was the authenticity of her performance that made the scene, and her entire performance, so powerful.  It requires a certain amount of courage to play a role like this.    Watch this actress; she is going places.