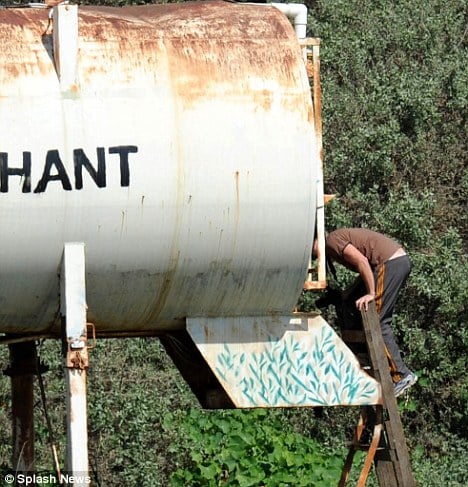 It’s been two days since Exit Through the Gift Shop lost the Best Documentary Oscar to Inside Job, at what was probably the worst Oscar ceremony ever held. Even more disappointing (although not surprising) was that Banksy himself did not make an appearance. However, we recently reported that the famous street artist did in fact arrive in Hollywood earlier last week, leaving behind some of his most recent pieces across Hollywood.

The first was an image of Mickey Mouse downing a cocktail and putting his arm provocatively around a scantily-clad model, which appeared on a billboard above a petrol station on Sunset Strip. Later, an image of a child holding a machine gun loaded with crayons, standing in a field of brightly-coloured flowers, appeared on the wall of a clothing shop in the Westwood district. This was followed by an image of a dog urinating on a wall in Beverly Hills and finally a picture of a Charlie Brown figure on Sunset Boulevard. Now it seems some drivers in California today caught photographic evidence of a man believed to be the world famous graffiti artist working on what appears to be a Banksy art piece in Santa Monica. According to the Daily Mail, Banksy, who is known to go back and touch up his artwork, was caught on camera in the photos below (and above). Of course there is no proof that it is the elusive street artist but chances are it is, since the piece has popped up on Banksy’s official site. While the photos didn’t really get a clear view of the man, it is the closest look we have had thus far. With all the media surrounding Banksy, the question remains, how long before his identity is revealed?

via the Daily Mail