Though Amazon Prime kept audiences waiting more than a year for the return of Transparent and the volatile and captivating Pfefferman clan, the wait was truly worth it. The second season of Transparent, once again ten episodes of 30 minutes each, is another stellar and devastating piece of television that explores all sorts of fascinating questions about identity, be it transgender, queer, feminist, or Jewish. The characters are once again presented with a refreshing sense of honesty, and the show never really tries to them likable or unlikable, sympathetic or unsympathetic, just human. Sometimes, almost all the time, the Pfeffermans make selfish, borderline horrible bombshells of decisions, but the show does not shy away from showing their motivations or the consequences for both their family and the others within the blast radius. The second season has a more egalitarian focus than the first – Shelley, Sarah, Josh, and Ali are given more time to shine alongside Maura – and it definitely benefits from the expansion.

The first season took eight episodes to deliver an episode of television that could truly stand on its own as “great,” but in its second season, Transparent opens with a great one. Where the show truly outdoes itself is with the ninth episode, “Man on the Land,” which takes place at a music festival for “womyn” (not women) in the woods. It showcases the diversity of color, body, and community in “womyn” in a way the show has often faltered with in its focus on one affluent white family, but there is one big exception to this diversity: transgender women are not allowed at the festival. Ali and Maura are unaware of the policy but quickly learn of it, with Maura feeling increasingly alienated and uncomfortable as the festival goes on. Maura becomes separated from Ali, and the cacophony of drumbeats and women swells as she grows more frantic, in a clever piece of editing and direction from Soloway. Eventually, the characters engage in a discussion on whether or not the policy is justified, and it manages to be nuanced while allowing each participant’s personal bias to seep through. Maura cannot see that she did benefit from privilege when she presented as a man for most of her life, literally denying other women access to the same opportunities she had at Berkeley, while the “womyn” cannot see that womanhood might be more than being born with a uterus.

The episode concludes with a haunting, powerful, and deeply moving sequence, tangling together the Nazis attacking the Institute for Sexual Research, burning its library and arresting its patrons with Maura struggling to find her way out, and then storming out of the festival. The thread connecting the two is Ali; she literally comes face to face with her past, first brushing past her great-grandmother in the forest, and then standing with a younger version of her grandmother at the bonfire, destroying all of the Institute’s books. Ali and her grandmother watch helplessly as the Nazis drag away Gittel, her grandmother’s transgender sibling. It uses the same musical cue as the premiere’s closing moments (the PAL remix of “Waiting” by Alice Boman), with Gittel making explicit the connection between the two sequences. It’s some of the most affecting, heartbreaking minutes of any television show. Transparent took a risk weaving this narrative into its story, as the flashbacks to 1933 were not as clearly related to the present day as previous flashbacks were, and at first seemed more mysterious than anything, but it paid off beautifully. Between this sequence and the concluding moments of the season finale, where a doctor fatefully declares “It’s a boy” when Maura is born, Transparent’s focus on its past often results in its best moments. 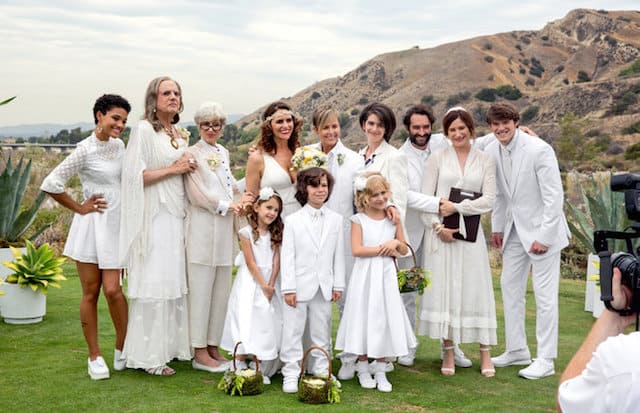 That’s not to say the rest of the season is somehow unworthy; on the contrary, as a whole the season is incredibly consistent in its quality. Other storylines are just as electric, with Josh and Raquel’s engagement, pregnancy, miscarriage, and breakup in just a few short episodes finding new ways to explore heartbreak in a show that has already portrayed so much. Sarah’s unsuccessful attempts at trying to tether herself to something after shattering another family unit gives the character a much more interesting arc than the first season did. And Shelly seems to finally find some sense of happiness in a new man, Buzz, after having her heart broken by Maura yet again.

The ensemble continues to be among the best in television, and the cast all turn in better performances than the first season, despite giving themselves such a high bar to clear. Amy Landecker flings herself into Sarah’s sadness in a physical way that makes her hazy, unmoored eyes almost frightening. Gaby Hoffmann continues to make Ali understandable, despite the character’s continuing immaturity this time resulting in breaking her best friend’s heart (and when that best friend is played so sweetly by Carrie Brownstein, it’s a tall task to make such a decision understandable). The riveting scenes between Raquel and Josh owe just as much to the writing as they do to Kathryn Hahn and Jay Duplass giving their all. Jeffrey Tambor is reliable as ever as Maura, as she continues to find her voice even while alienating those who were most supportive of her. Judith Light should win awards for the noises she makes alone, whether moaning in the tub as Shelly and Maura revisit an old routine, or wailing with pain and guilt after finding out that Raquel has miscarried. Add these striking moments to Shelly’s steely monologue when Josh finally confronts his mother about sins of the past, and it makes for a powerhouse performance. The new faces added this season all fare well too, with Angelica Huston and Hari Nef making the strongest impressions. Michaela Watkins, who is really having a career year between her starring role on Casual and guest spots on virtually every comedy possible, returns to the show as Yetta, the original matriarch of this clan, and proves she’s just as talented in what amounts to a purely dramatic role.

But most of all, the second season cements creator Jill Soloway as an artistic force of writing and directing, even as, or perhaps as a result of, her expansion of the writers’ room to include fresh new voices (including the show’s first transgender writer) and allowing other directors to take the helm (including the show’s first transgender director). Soloway deserves to be mentioned in the same breath as Matthew Weiner and David Chase when discussing the auteurs of television. Hopefully this second season is just the first of many masterpieces from Soloway to come.