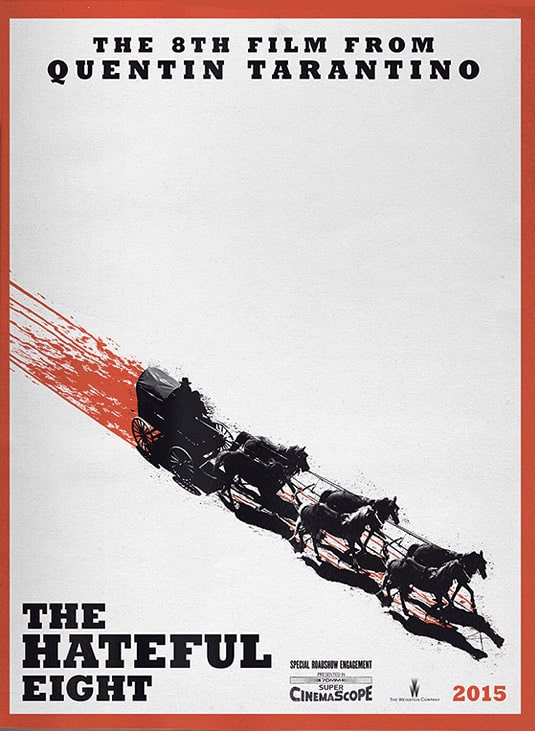 Written and directed by Quentin Tarantino

Here we go again. 3 years, literally to the day, after Quentin Tarantino dabbled in the western genre with Django Unchained, he returns for another Christmas Day serving of violent, western-influenced mayhem in the shape of The Hateful Eight. Lavishly produced and advertised, with a lot of hoopla surrounding the fact that it was shot using 70mm film, the movie arrives at an atypical moment during the holiday season, inviting those less interested in good dinosaurs, inspirational tales of ragtag boxers, and mystical lightsaber duels to spend three hours in a desolate inn with no less than eight characters that fit the title’s bill marvelously. The question remains: can a hateful eight make for a happy time?

Set shortly after the American Civil War, Tarantino’s latest is rooted in a Wyoming winter wonderland. A storm is fast approaching as war veteran turned bounty hunter John ‘The Hangman’ Ruth (Kurt Russell) is traveling by stagecoach with his latest prize, mad killer Daisy Domergue (Jennifer Jason Leigh). Individuals that could not be more different twice intercept them along the way, hoping to join the ride and avoid the blizzard: Major Marquis Warren (Samuel L. Jackson) and Chris Mannix (Walton Goggins). The latter is a southerner racist advertising himself as the new sheriff of Red Rock, the very town where Ruth is heading to collect his bounty. The former is a charismatic Civil War vet ill at ease with Mannix’s inclusion, although the feeling is mutual. When the blizzard forces them to make a pit stop at Minnie’s Haberdashery atop a hill, they are greeted by even more colourful characters: Oswaldo Mobray (Tim Roth), the supposed hangman of Red Rock, the mysterious and taciturn Joe Gage (Michael Madsen), General Sanford (Bruce Dern), former southern Civil War vet, and Bob (Demian Bechir), a weird fellow presenting himself as provisionary caretaker of the inn whilst Minnie is away on a visit to her mother’s. Both Ruth and Warren smell a rat, but who is it? Minnie’s Haberdashery is about to get very cozy indeed. 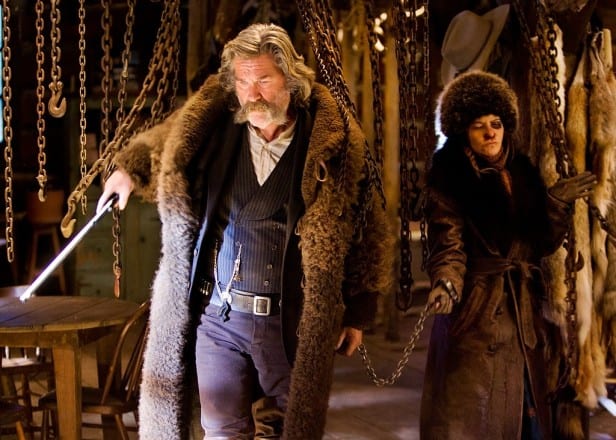 No one even remotely familiar with the director’s oeuvre will ever walk into the theatre expecting to get a blisteringly fast paced actioner that clicks along like it was nobody’s business. The beauty about Tarantino’s style is the very fact that he is, for lack of a better term, indulgent. His dialogue is often funny, sharp, extremely character-driven, referential, and controversial in the best way possible. It feels very odd to argue that those exact qualities that so often lift his films to heights other directors dare only dream of actually keep much of The Hateful Eight in neutral. Granted, the film does get going after a while, but it takes a long time to do so, the languid pacing of the first half and bland characterizations making a lot of the first 90 minutes a bit of a struggle with only occasional sparkles of brilliance.

Those two elements, pacing and characterizations, are surprisingly off the mark for a Tarantino film, especially one entrenched in the western genre, something the director aced previously with Django Unchained. Part of the issue has to do with the story’s structure, which eventually reveals itself to be something of a mystery tale. As such, in order for said mystery to be intriguing and worthy of the audience’s time, in this case three hours, set-up is obligatory. This is perfectly reasonable, only that in the case of The Hateful Eight, the type of characters encountered are not as fun or interesting as is usually the case in Tarantino’s movies. Some of the cast members, such as Bruce Dern and Michael Madsen, both terrific actors, inhabit bland or simply predictable roles. Others, like Demian Bechir’s Bob, are comically stereotypical, even by Tarantino’s frequently exaggerated standards. Arguably the saddest criticism pertains to Kurt Russell’s role, John Ruth. Far be it from anyone to dislike one of the most likable, charming actors in Hollywood, and it should be noted that Russell himself is not the issue, but his bounty hunter personality is oddly limp. Yes, there are moments when he struts about and barks lines like a tough guy, fair enough, yet on the whole the role simply does not match up with those of some of his co-stars. 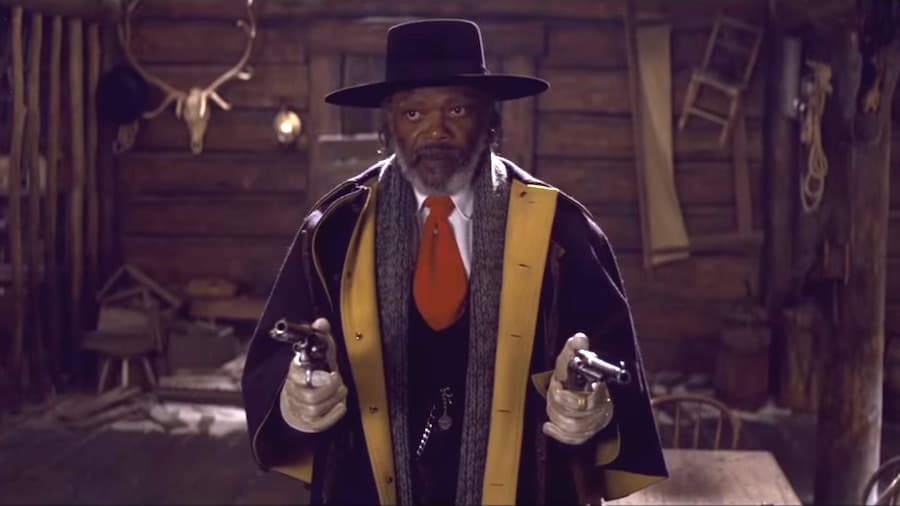 The film’s most curious aspect is its thematic texture, concentrating predominantly on the ever-present plague of racism in the United States. Considering that it is, even in 2015, still a critical issue, it does theoretically make sense to tackle it in a film, and who better than Tarantino to give it some unapologetic vim and verve? That said, it feels as though Hateful Eight is treading virtually the same territory as did Django Unchained did, only in less inspiring fashion. From a thematic perspective, Hateful Eight almost comes across as a Django B-side. In fairness, a Tarantino B-side is a heck of lot more entertaining than what a lot of directors could serve up, but it stands to reason that this latest outing is not quite up to level with originality.

Lest anyone cry doom and gloom, there are some important, praiseworthy ingredients to be found. Samuel L. Jackson has been relegated to mere caricatures in recent partnerships with the writer-director, amusing though they frequently are. This time around however, Jackson is given the meatiest, most fascinating, and funniest role of the bunch. For anyone that started to believe the inimitable thespian was losing his skill set or just sleepwalking through roles, the price of admission and running time are worth it to see Jackson bring home the bacon. Additionally, Walton Goggins is awarded a far more nuanced, complex role than initially foreseen, which sounds absolutely insane when considering that he is a racist that would happily see a black man lynched and hung. Finally, Jennifer Jason Leigh shines, so to speak, as Domergue. A filthy wretch, Domergue is brought to villainous life by the script and a lively performance from Leigh, the only issue being that, as the supposed centre of everyone’s attention at the inn, she is not given nearly enough screen time.

A lot will be said about the 70mm cinematography and the fact that Ennio Morricone returns to compose an original score. Both accounts are justified, for The Hateful Eight, pacing issues aside, is a damned fine piece of cinema to ogle at, both when the octet of characters sneer and argue inside and around the haberdashery. Cinephiles got quite giddy when the film’s trailer advertised its ‘PanaVision’ credentials, and their anticipation is rewarded here, as is that of those longing for new Morricone music, which sets the mood brilliantly, thus announcing that he hasn’t missed a beat.

Unless one is simply allergic to Tarantino’s style, it is hard to outright dislike any of his movies, even those not at the same level as his masterpieces. The same applies here. Hateful Eight is not a bad film, just one that could have benefitted from some discipline. Perhaps a hateful quartet or quintet would be sufficed, although that admittedly does not sound as cool a title. 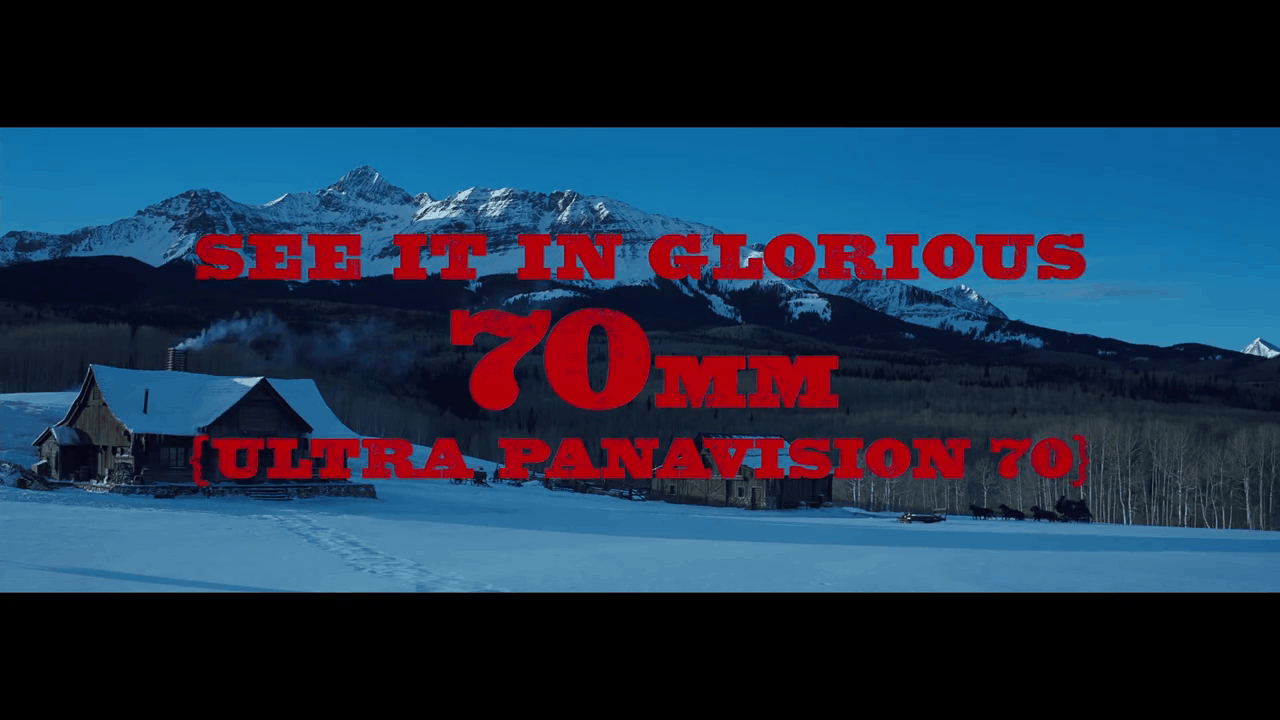