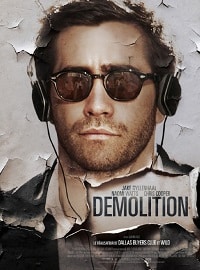 Jake Gyllenhaal is right at home playing emotionally-crippled characters. His latest moody bastard, from the recovery drama Demolition, may be more endearing than the sociopath from 2014’s Nightcrawler, but his mantle isn’t cluttered with Christmas cards, either.  Director Jean-Marc Vallée loses the thread about midway through, but there’s still some powerful stuff here, including lots of jet-black humor, some compelling observations about the individual nature of grieving, and a genuinely poignant conclusion.  Ultimately, Gyllenhaal’s ease with uneasy roles makes this bumpy Demolition a somewhat satisfying deconstruction.

Davis Mitchell (Gyllenhaal) flourishes in the high-stakes world of investment banking. He gets paid big bucks to stay analytical and keep his emotions in check.  Hell, even his name is impenetrable.  Things quickly unravel for Davis, however, when his wife Julia (Heather Lind) is killed in a car crash.  After years of devising emotional barriers, Davis can no longer connect with the feelings that initially drew him to Julia.  In a scene eerily reminiscent of Louis Bloom in Nightcrawler, Davis stares into the mirror at his wife’s wake, conjuring a passable facsimile of sadness.

How does one grieve when they’re hermetically sealed inside an emotionless world? They tear down the walls, of course.  Davis discovers he has an appetite for destruction.  He volunteers for demolition work on old buildings; delighting in the liberation of pain that comes from a rusty nail through his foot.  His other emotional outlet is a series of disturbingly-personal complaint letters to the Champion Vending Company.  He lost some quarters in a vending machine at the hospital (after learning of his wife’s death) and he’s determined to get satisfaction.  Davis’s “Dear Ndugu” letters draw the attention of a strange Human Resources worker named Karen (Naomi Watts), who is recklessly drawn to his honesty and sadness.

The relationship between Davis and Karen forms the backbone of Demolition.  These two wounded souls haven’t done themselves any favors through their questionable coping techniques.  Davis has withdrawn from the world completely, while Karen survives in a haze of ever-present bong smoke.  Screenwriter Bryan Sipe so thoroughly crawls inside of Davis’s damaged psyche that we come to empathize with his emotionless void.  It’s an uncomfortable place to be, which makes Karen’s off-kilter personality such a welcomed contrast.  When they’re together, the future seems a bit less dreary.

Director Jean-Marc Vallée (Dallas Buyers Club, Wild) has a flair for understated glibness.  In fact, the most surprising element of Demolition is the pitch-perfect humor that trumps your better judgement.  Watching Davis’s aloof babbling drive his grieving father-in-law (Chris Cooper) to the point of madness shouldn’t be funny, but Vallée’s deft touch and Gyllenhaal’s uncanny timing pay it off every single time.  This allows Davis’s obsession with retrieving his quarters, or his odd fascination with some monkeys grooming in a hot spring to feel both dramatically compelling and darkly hilarious. 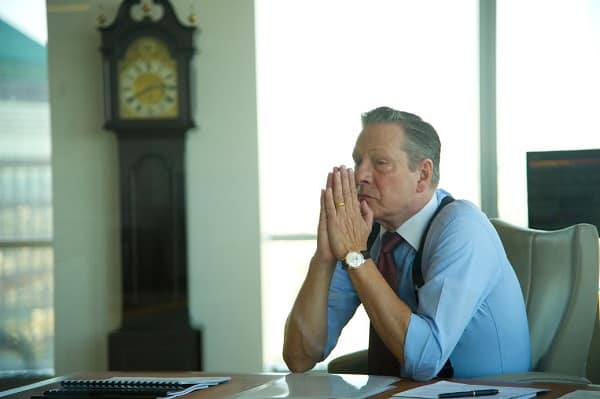 Unfortunately, Vallée struggles with the film’s overpowering symbolism. “For some reason, everything has become a metaphor,” Davis remarks as he stares at lonesome trees by the roadway.  His growing predilections for demolition and deconstruction are uncomfortably heavy-handed at times, as when he breathlessly speculates about the contents of airport luggage or the inner-workings of an antique clock.  It feels like Vallée and his screenwriter didn’t trust audiences to make the thematic leap, so they built an extra flight of stairs just to make sure.

More troubling is a sharp re-direction that occurs toward the end of Demolition.  Davis becomes suddenly (and mystifyingly) preoccupied with Karen’s gender-confused son, Chris (Judah Lewis).  It’s not terrible material, exactly, but it’s an ill-advised diversion from Davis’s budding relationship with Karen, who inexplicably disappears from the action.  It also leads to some character inconsistencies for Davis, including a baffling round of target practice with a Kevlar vest, and a Peter Parker-esque street dance to Free’s iconic tune, “Mr. Big.”  It’s impossible not to feel embarrassed for everyone involved with these tonally-awkward, cringe-worthy scenes.

Luckily, both Gyllenhaal and Watts deliver Oscar-worthy performances. It’s a decidedly unglamorous turn for Watts, who seems invigorated by her camouflaged heroine.  Lewis has some good moments as the troubled teenager, and nobody cries prettier (or more manly) than Chris Cooper.  Still, this is Gyllenhaal’s showpiece, and he slips into the role with an almost disquieting ease.  His ability to be simultaneously charming, creepy, and heartbreaking without even trying is remarkable.

Despite its many virtues, it’s impossible to escape the impression that Demolition is a missed opportunity.  One gross miscalculation with the script undermines a standout performance from Gyllenhaal and the assured direction of Vallée.  It’s not a bad film, certainly, and it recovers nicely from this misstep to deliver a satisfying conclusion, but its flirtation with greatness leaves you frustrated.  The filmmakers aspire to a new statement on conflicted masculinity, but their uncompromising exploration descends into obvious sentimentality; as if Fight Club had lost its nerve midstream and tried to redeem Tyler Durden, instead. Demolition is a heated battle between emotional honesty and crowd-pleasing condescension that ends in a tantalizing draw.