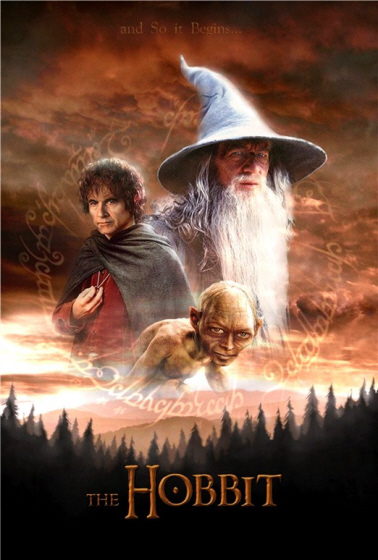 Ah, I remember fondly the years of Tolkien mania, that stretch of time spanning 2001 to 2004 back when The Lord of the Rings was busting up box office records and sweeping the Oscars, and Frodo and Gandalf were names familiar to social groups outside your average D&D gatherings.  I also recall those year-long periods of antsy anticipation between installments of the trilogy.  But now over five years has gone by since a hobbit entertained a movie theater, and Middle Earth has all but passed out of sight and mind for the majority of the mass consumption audience, while the rest of us Tolkien devotees sustain ourselves with special features on the extended editions of the DVDs, re-readings of the books, and tidbits about the eagerly awaited Hobbit movie.

So you can imagine how fulfilling it is as casting rumors finally start to trickle down the genre film grapevine.  Peter Jackson and New Line Cinema have done their very best to reassure fans that Ian McKellan, Andy Serkis, and Hugo Weaving will reprise their roles in The Hobbit, but that leaves a whole cast of new characters (not to mention a younger version of Bilbo) to hire.  Last weekend, Ain’t It Cool News somewhat equivocally reported that Brian Cox is a major contender for the role of Thorin Oakenshield, the commander who leads a band of twelve fellow dwarves and the titular hobbit in an assault against a mighty dragon. In case any of you are trying to a put a movie part to a name, Cox has played a handful of villains in films such as The Bourne Identity, X2: X-men United, and Adaptation (ok, maybe Robert McKee isn’t exactly a villain, but certainly he’s an antagonist), and of course, some might remember him as the original Hannibal Lecktor.  Entertainment blogs have run with the story, and geeks and bloggers everywhere, myself among them, are sounding their approval of the choice.  However, there is still a question mark at the end of reports about Brian Cox’s involvement.  Nothing has been confirmed as of yet, but it’s enough to reawaken in me that special sense of impatience only a hobbit-related film can inspire.

So that’s one dwarf (possibly) down.  Only twelve more to go.  I wonder who will voice Smaug.  Do you think they could talk Sean Connery out of retirement?  Any other Dragonheart fans out there want to second me on that?