The best loot-based games understand the addictive cyclical nature of finding better gear and using it to improve your character in order to, well, find better gear. While The Division certainly isn’t without flaws, it absolutely understands how satisfying it is to finally find that high-end drop you’ve been looking for.

Set in post viral outbreak New York, The Division has players track down the source of the outbreak and put a stop the newly-risen roaming gangs (either solo or with friends), all while collecting that sweet, sweet loot.

The Division is a strange genre hybrid of third-person shooter and loot-based MMO, which I’m happy to say is executed fantastically. The third-person shooter aspect feels tight and satisfying, combining one of the best cover systems in recent memory with entertaining and punchy shooting. On top of that are the endlessly addictive RPG systems, and it’s impossible to not want to try out a new piece of gear or learned ability as soon as it’s acquired. 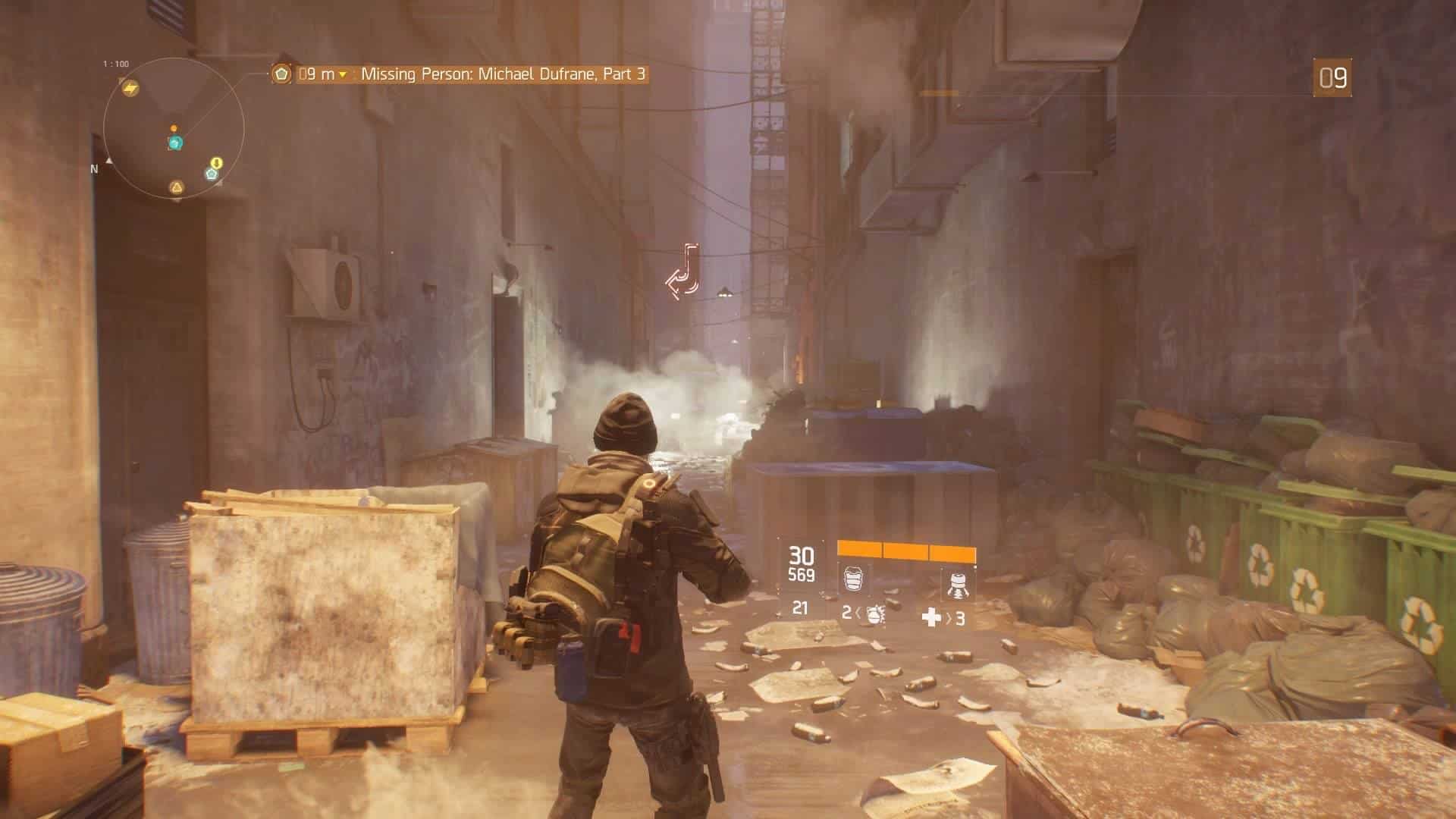 The most jarring – and talked about – problem with combining these systems is the weird disconnect between shooting enemies and dealing RPG-style damage, which is another way of saying that enemies can take severely unrealistic amounts of punishment before they go down. Your tolerance for this depends entirely on the kind of game you’re after; players looking for a more traditional shooter may find this too off-putting, whereas RPG players likely won’t bat an eyelid.

After a relatively long tutorial section, players are granted access to the headquarters, an upgradeable building that serves as their base of operations for the remainder of the game. Upgrades are purchased with resources earned from activities in the world, and building your HQ unlocks vendors, skills and periodic loot and material drops. It’s a fun and interesting way to build your character, and seeing the HQ develop adds a real sense of progression to the otherwise mostly-static New York.

The narrative, unfortunately, ranges from boring to laughable. There are about four major characters – not including the mute protagonist – none of whom develop in any significant way or add anything worthwhile to the story. While there’s more plot here than certain other shooter-MMOs, none of it felt important or interesting enough to care about. 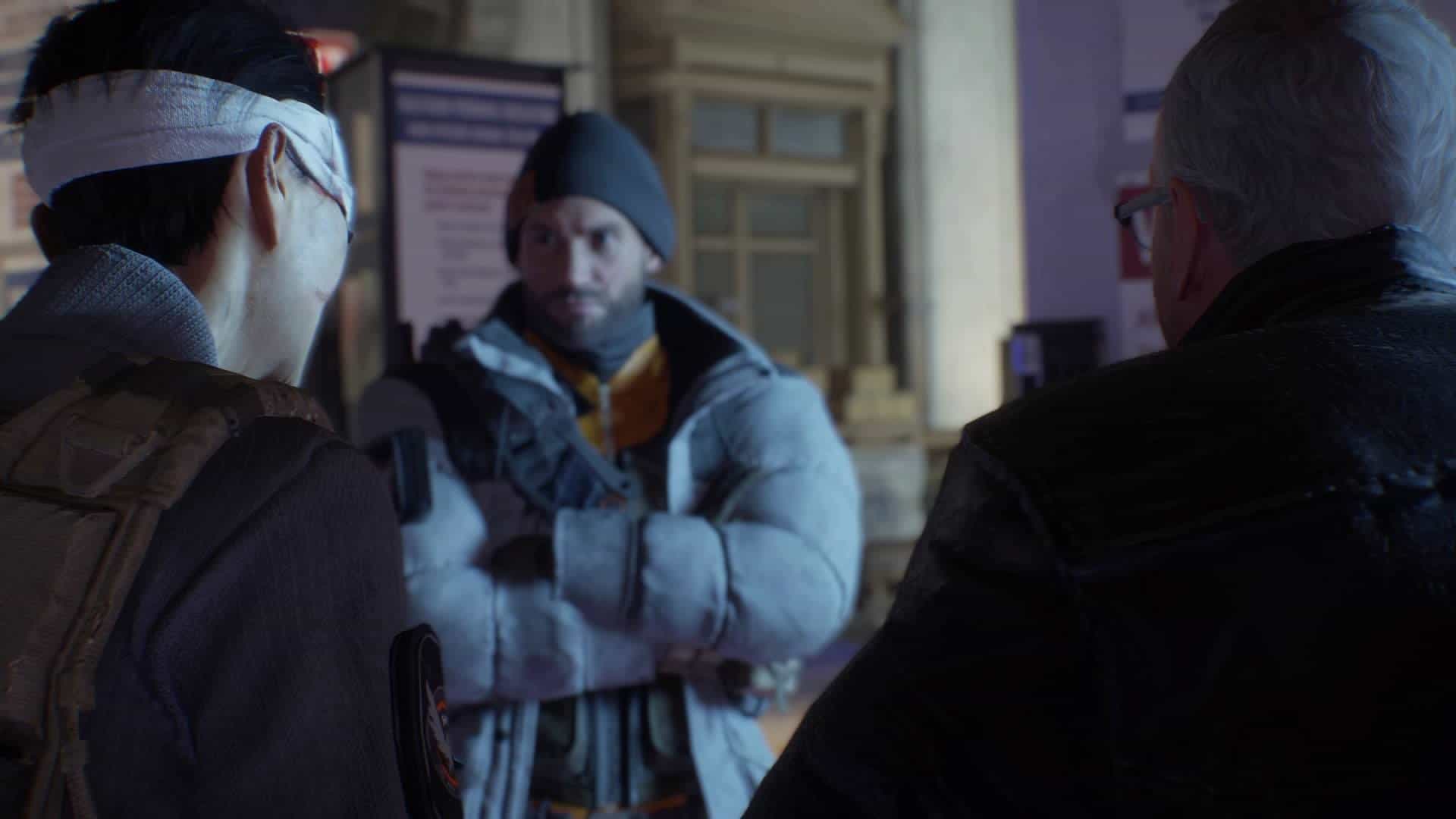 There are three major groups of enemies in The Division; the Cleaners, a flame-thrower wielding group who firmly believes that that virus must be burned out, the Rikers, a group of escaped criminals who decide to finally got revenge on the system that wronged them, and finally the Last Man Battalion, a group of ex-soldiers and mercenaries who decide that they should save the city through martial law and violence.

All of these groups are run by badly-written and unbelievable comic book villains that are played completely straight, which makes their dialogue cringe-worthy at best. The narrative also completely lacks any form of self-awareness; while you’re tasked with restoring the city, you spend the bulk of your time mass-murdering what is essentially the homeless population of New York, after which one protagonist refers to you as “the conquering hero” (somewhat sarcastically, but only a little). After a viral outbreak, violence evidently fixes everything.

Luckily, The Division understands that its strength lies in the addictive combat and loot collection, which it handles exceptionally well. There are several gear slots, from weapons to knee pads, each with several statistics that genuinely affect your performance in combat. Raising your “Firearms” skill predictably makes your guns deal more damage, but it’s entirely possible to focus on stamina and armour, becoming a walking tank that can absorb punishment while your team mates are left free to flank or heal. 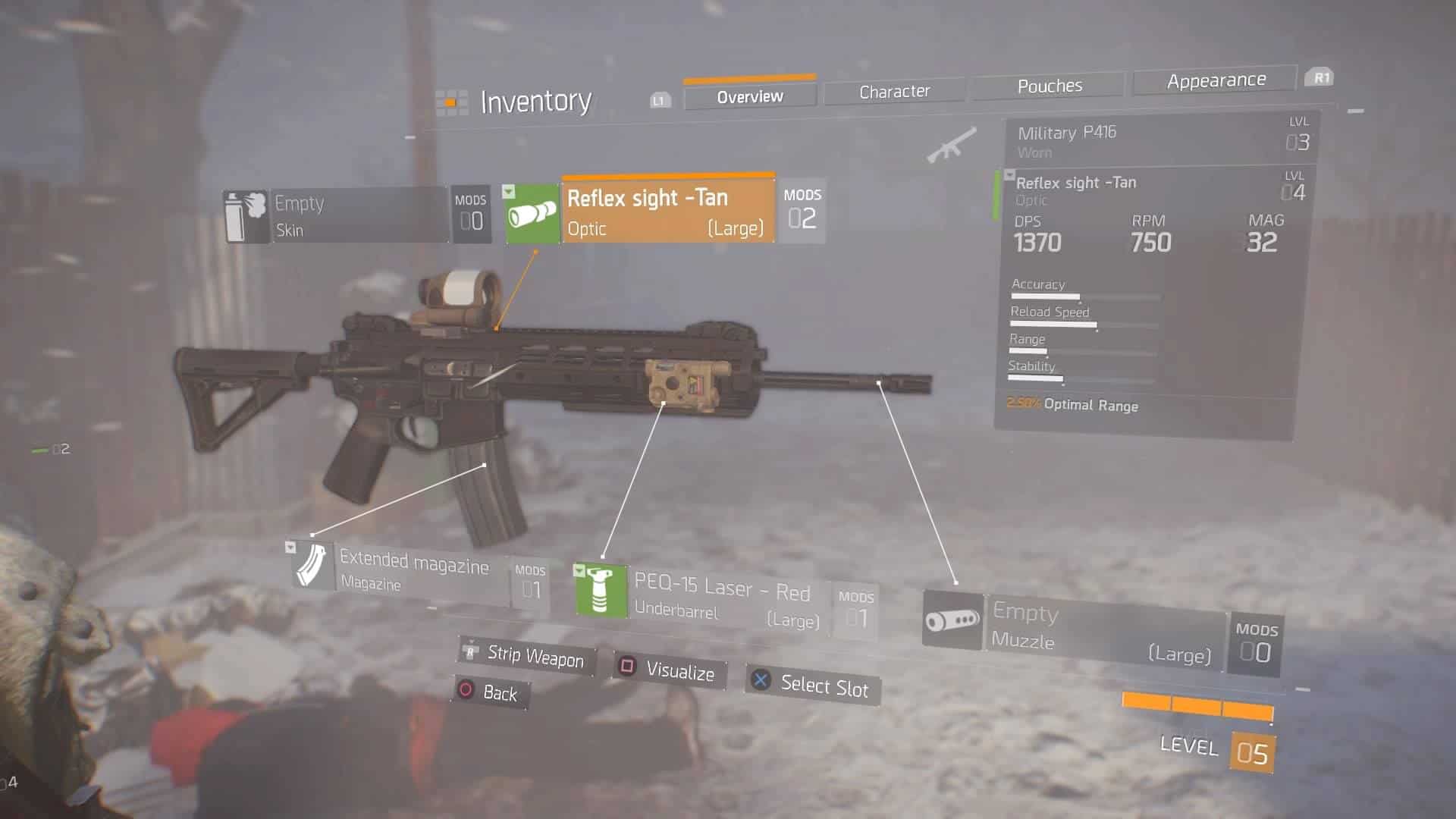 Team-focused builds are not only possible, but encouraged. Players can only equip two skills (and a third “Signature skill”), which doesn’t leave a whole lot of room for flexibility in combat. However, teaming up with up to three other agents means that you can potentially have eight skills between you, massively improving your options and tactics. While the entirety of The Division can be played solo, there’s a lot more fun to be had with teammates as you combine abilities and utilise complementary roles.

The bulk of the game is spread across several missions, each of which slightly advances the plot and provides interesting challenges. While I was initially worried that I’d be well and truly sick of New York by the end, The Division does an admirable job of keeping the environments fresh and unique. From scrambling through darkly lit sewers to turn on the power grid to fighting your way through a burning Christmas-themed mall, there’s a wonderful variety of environments to explore throughout these missions, with each managing to surprise me in new ways.

On the down side, there’s not a whole lot of surprise in the gameplay. There are a couple of interesting twists – areas where you have to carry heavy equipment that slows you down and forces you to use a sidearm, or a unique and fun boss fight that I won’t spoil – but for the most part, The Division doesn’t change the formula much. While I found the combat to be fun and addictive enough that this didn’t really bother me, your mileage may change if you don’t find the same kind of joy in loot and third-person shooting. 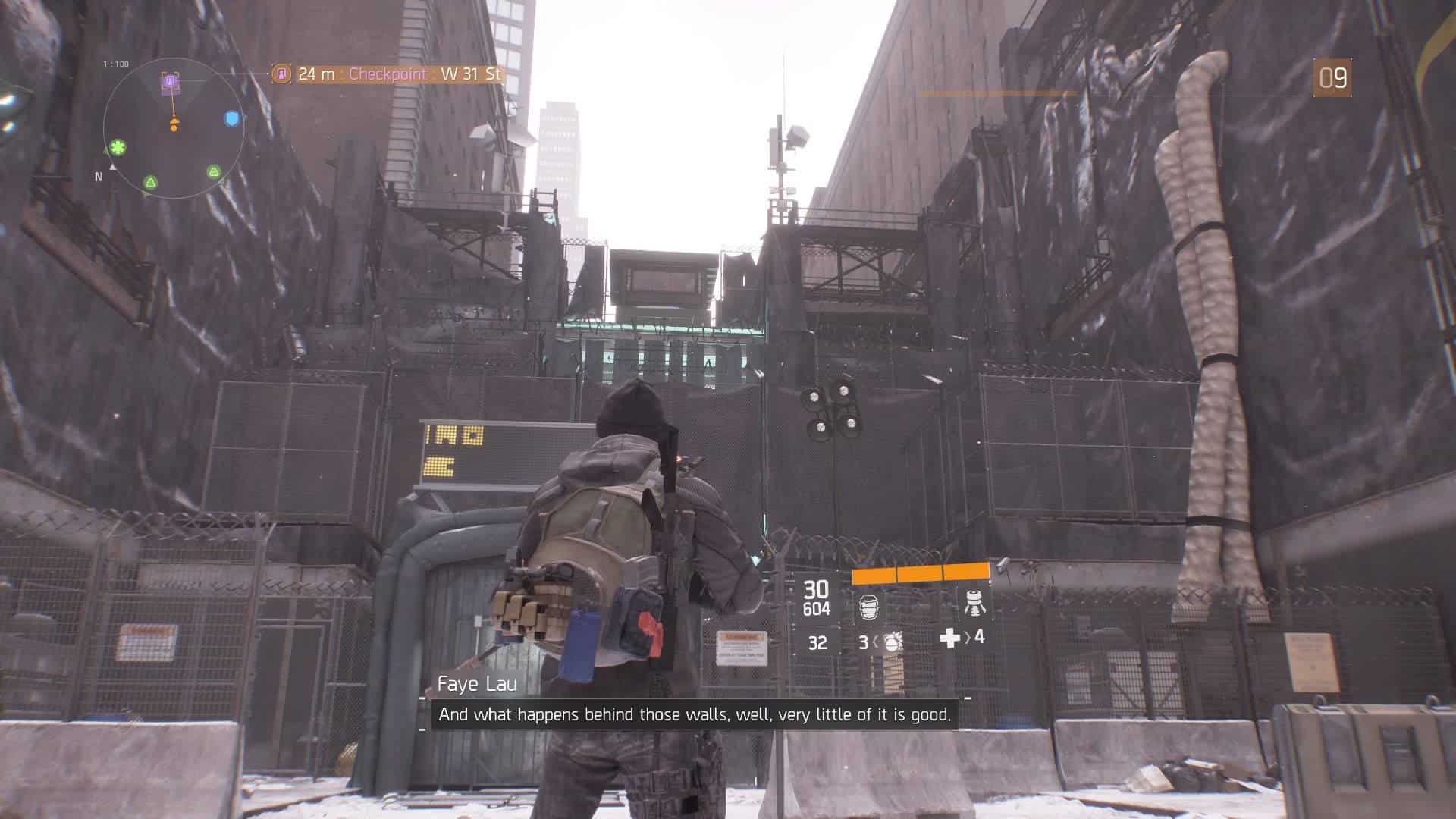 Luckily, there’s also the “Dark Zone”, a PvP-enabled area that comprises about a third of the map. The Dark Zone is broken into level brackets to stop new players from being completely annihilated, but since you don’t earn regular experience from combat while inside it never felt worth visiting until level 30 (the current maximum). However, once there, the Dark Zone quickly became my favourite part of The Division by a wide margin.

This is largely because it’s the only time that the game becomes unpredictable. While there are plenty of powerful NPCs to fight and loot, the real thrill comes from the other players, who aren’t hostile by default. However, anyone that deals to much damage to another player becomes “Rogue”, making them hostile to all nearby players but granting large rewards if they can survive until a timer runs out. Going rogue in the Dark Zone is a thrilling and tense experience as other players hunt you through the streets, hoping to kill you and score some increased rewards.

Loot gathered in the Dark Zone is unusable until it’s “extracted”, which requires travelling to an extraction point, calling it in (which alerts everybody nearby), waiting ninety seconds for a helicopter to arrive, then finally hooking your precious loot bag up to it. Of course, dying at any time causes you to drop any loot that you haven’t extracted, leaving it up for grabs for anybody else. 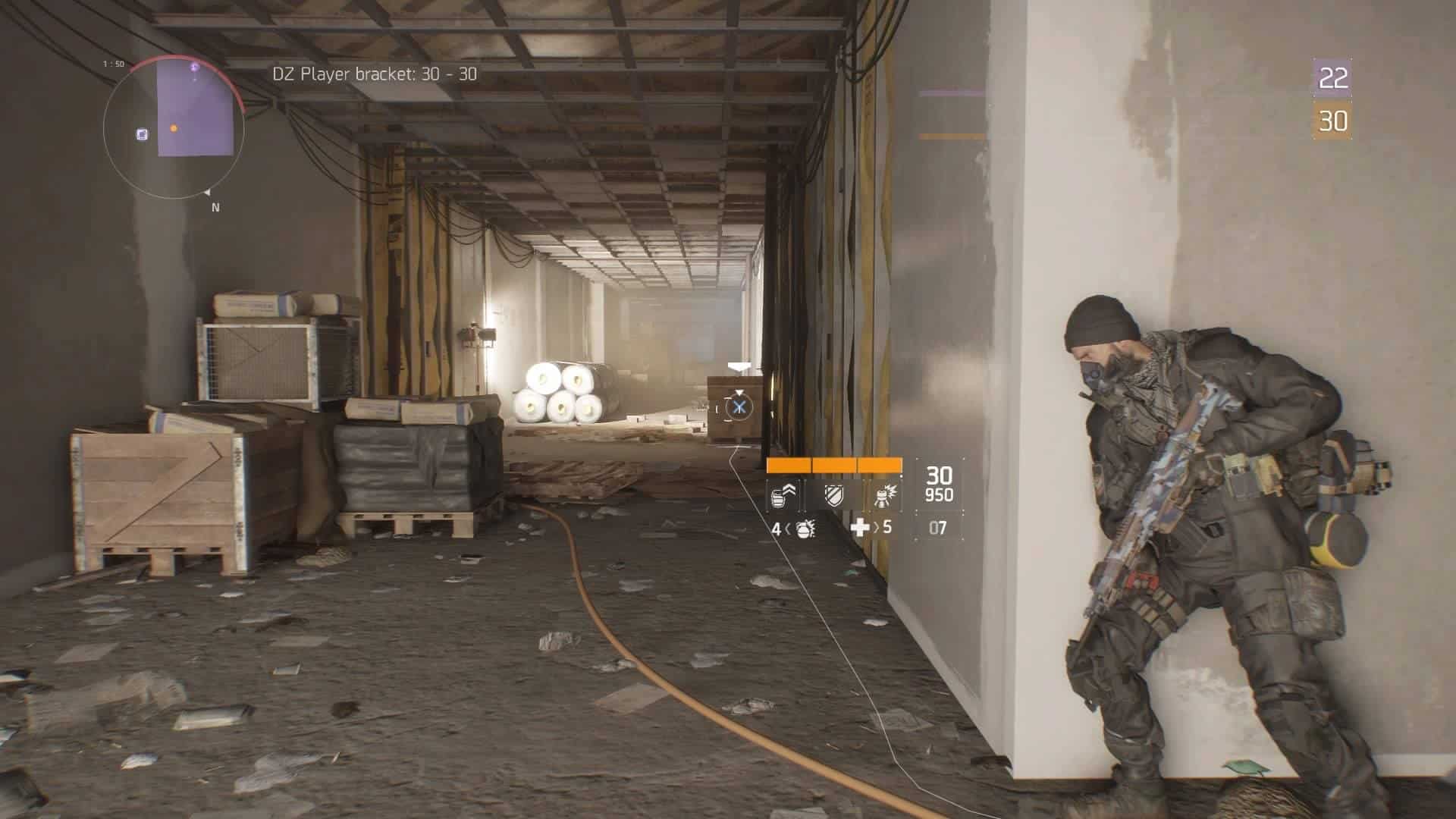 This makes the Dark Zone very intense, but enjoyable. Trying to extract a powerful or rare piece of gear results in the longest ninety seconds of your life, and nervously watching other players gather around to extract their own loot doesn’t do anything to alleviate the stress.

The Division is also an undeniably beautiful game, with a surprising level of detail. Snow covers everything, and abandoned cars and belongings litter the streets. What impressed me the most was the way bullets affected everything – shooting glasses causes individual bullet holes, and windows can be shot out piece by piece until the whole thing collapses believably. Even street signs can be shot through to create individual holes – if you can see it, shooting it affects it in some interesting way.

Weather effects are plentiful, beautiful and best of all, affect the gameplay. Heavy blizzards badly limit your view and force close range encounters, especially when a spotlight bounces around the fog and blinds everyone involved. Light snow will do the same to a lesser degree, but the game generally felt very atmospheric and always looked great. However, it’s worth mentioning that I experienced significant texture pop-in after fast travelling, playing on PS4. This usually went away quite quickly, but was jarring and ugly when it occurred. 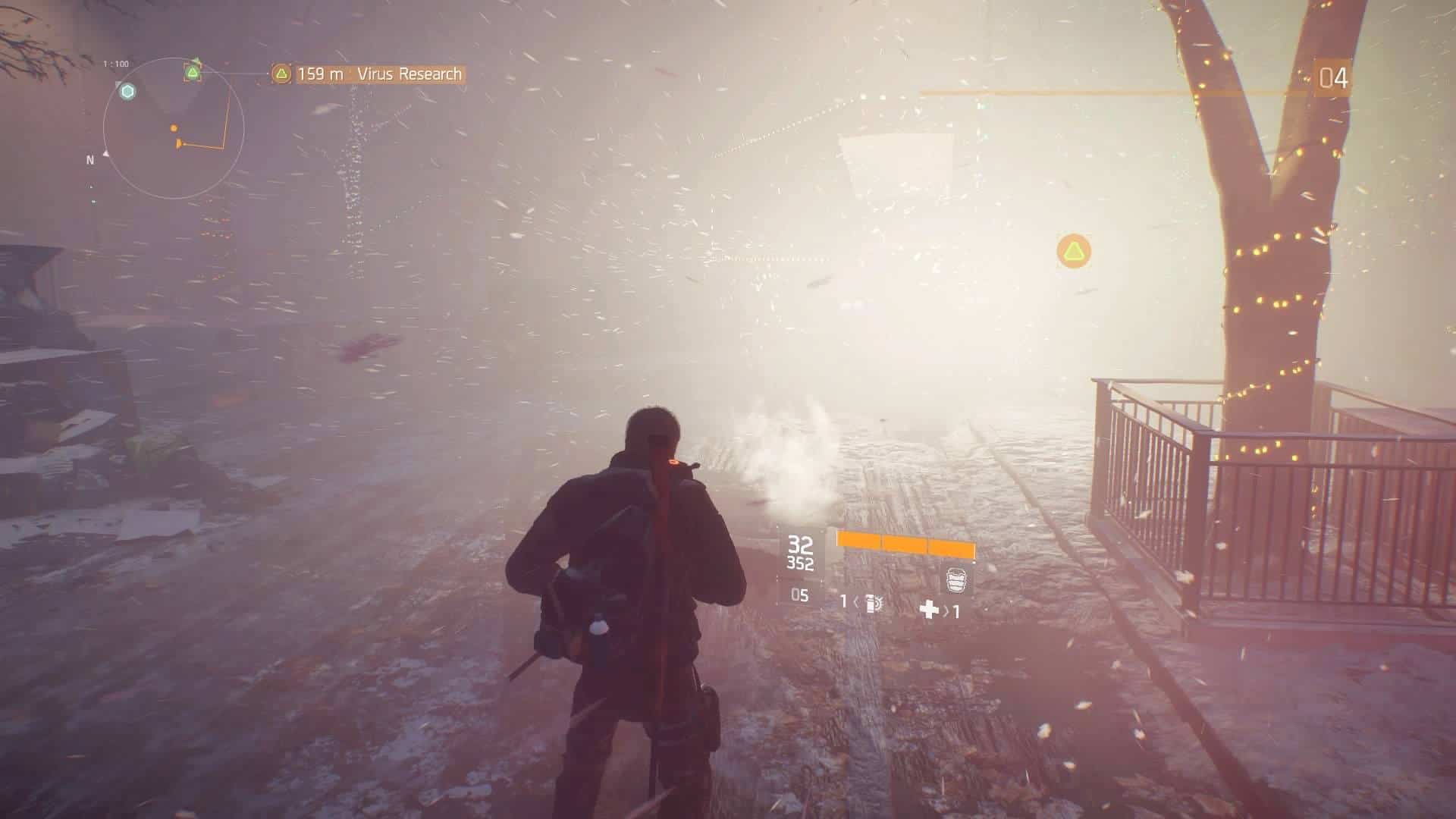 The Division is best suited for those who enjoy collecting loot and building characters, but aren’t put off by enemies taking unrealistic amounts of damage. There’s loads to do – more than I could cover in the one review – but most of it revolves around the same gameplay loop of killing and collecting, so if you’re not a fan, steer clear.

Ubisoft has plans to continue updating The Division for at least the next year, so long-term fans will likely be rewarded. Fans of action-RPGs and third-person shooters will feel right at home in this strange but wonderful hybrid.