If you know fantasy artist Aly Fell from his pin up work, think again, he’s worked on covers for Heavy Metal and in recent times he’s done a cover for Buffy. It’s his work on the former that led to him working on an Elizabethan thriller The Shadow Glass, a mini-series that he’s writing and drawing for Dark Horse. Aly took time out of his busy schedule to talk to PopOptiq about The Shadow Glass, his career, and drawing women. 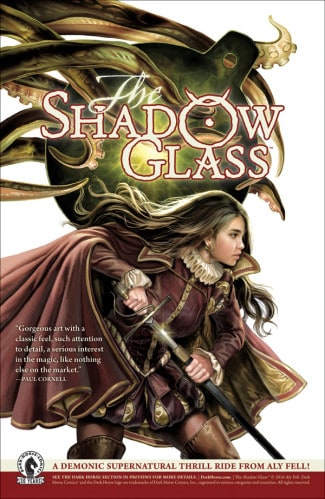 Pop Optiq: How can you describe your approach to illustration?

Aly Fell: Hello!  A tricky question that I suppose could be taken a couple of ways. Illustration is storytelling, whether designing a character or painting a 14 foot high battle scene. Sometimes you have the chance to present a story sequentially, as I am doing right now with my first comic The Shadow Glass, but at other times the essence of a story can be restricted to a ‘look’, an expression or perhaps a piece of clothing. They all hint at a history or intent, and by default – a story.

But as for my process these days it’s mainly digital. I intended to do The Shadow Glass traditionally and went to the lengths of buying appropriate media: inks, pens, comic page drawing-books etc. But events conspired against me and the whole thing was drawn using a Cintiq – a digital drawing board.

PO: You’ve stated you’re a philogynist how do you think women see your work?

AF: I hope all people enjoy what I do if they come across it. But I think if you draw women as human beings who have their own agendas and goals in the context of the story you’re telling (This also includes pin-ups.), then maybe that comes across and is appreciated.

AF: I have fans?! I always enjoy meeting people at conventions. There’s nothing like someone buying something you’ve created, or wanting to talk about it. None of us work in a vacuum, and finding others who ‘get it’ is really quite special.

PO:As an artist who knows how to draw women do you think that the way women are drawn and depicted in comics is changing?

AF: Thank you, and I really hope so. However, I’m no expert on the huge range of comics out there, I know what I enjoy and desire to read, and it’s generally not stereotypes or tropes unless they display a degree of self-awareness. I think overall the audience has grown and diversified or at least become more visible and vocal, and all entertainment media would be silly not to reflect that. If it doesn’t it’s in danger of becoming a relic. I tend to agree with Joss Whedon when he was asked “Why do you write these strong female characters? – Because you’re still asking me.”

But personally, I’m telling a story. If I start to think too much about ‘oh, these are women, how do they think?’ then I’m doing it wrong. They happen to be women, and this is their story, and what occurs is the way they react to events and circumstance.

PO:A short while ago you drew a cover for a Buffy issue, how did you find that process of drawing 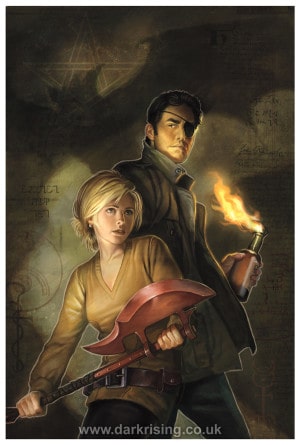 AF: The Buffy cover was a huge surprise. Dark Horse asked me to do a variant as its release would coincide with my visit to C2E2 comic con in Chicago – my first US con. I had to show I could get a reasonable likeness before they’d let me do it, so I did a couple of sketches of Willow, Buffy, and Xander, and they said yes. Likenesses are very important for licensed characters because it’s their career you’re dipping into. At C2E2, I sat next to Nicholas Brendon to sign copies of the variant, which was great fun as he was lovely, but the whole thing was a little scary.

PO:You’re currently working on your first comic, The Shadow Glass for Dark Horse, what was it like pitching the story to them?

AF: The pitch happened without me realising it was happening, to be honest. I was at my third Illustration Master Class, know as IMC, in Amherst USA. It’s a week long course where you mix and study with established illustration professionals, with the intent of working on either a suggested brief, or something of your own. I’d been developing The Shadow Glass, which existed then in very crude form, and decided to produce a mock cover for it whilst at IMC. Students are divided into groups whilst on the course and the one I was in coincidentally had Scott Allie from Dark Horse as one of the tutors. Whilst critiquing our work, Scott asked what my illustration rough was for. I explained a comic-book I’d been working on for myself. I told him a nice chap from a UK publisher had seen a few pages, and Scott asked to see some too, so I showed what I had with me. The rest is history. When I got back to England I sent him the completed draft, and now, two years later it’s being published.

What I learned from this, is don’t wait for ‘them’ to come to you. Go where ‘they’ are. If you want to get a comic published there is nothing like talking to people face to face. Even though I’m aware it was all a bit serendipitous for me, I’d still made the effort to go to IMC to develop my skills, and it was there I met Scott. I wouldn’t have done so if I’d stayed in my attic wondering what might have been.

PO:You previously dabbled in animation has that helped you doing a sequential story?

AF: Well, I was an animator for over 20 years, so that could be considered ‘dabbling’. ☺ I started at Cosgrove Hall on Roald Dahl’s ‘Big Friendly Giant’ and ended in computer games, leaving them in 2011, having gone from drawn animation to CG. But yes, drawing experience helps enormously. Despite The Shadow Glass being drawn digitally, my training and art education are all traditional. However I see no difference between the two – ‘mark making’ is the most important thing, everything else is window dressing.

AF: Elizabethan England, or specifically the 16th century in general, was a time of great exploration, both geographically and intellectually: a time when magic, religion and science were all considered appropriate methods for explaining the processes behind acquiring knowledge. John Dee saw nothing strange in using occult methods to either speak to angels, search for the Philosophers stone, or study mathematics and burgeoning scientific processes. Coming face to face with the apparently inexplicable and not knowing how to interpret it seemed like a good background for the horror that might exist if we couldn’t find logical means to explain it. It’s that ‘Lovecraft’ thing, not literally, but the spaces between “what we know” are the gaps where dragons lurk. Sometimes those dragons breathe fire; sometimes they just grin and make suggestions. 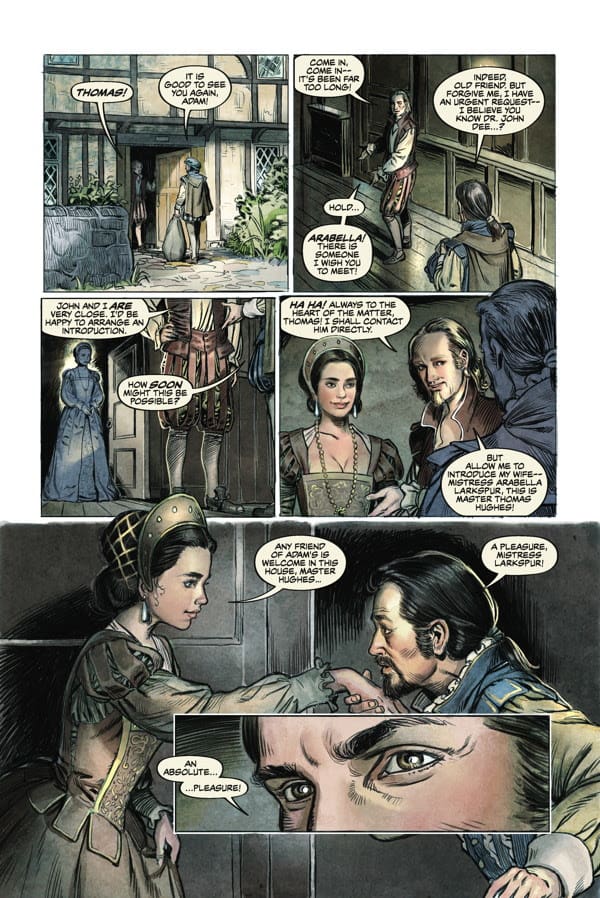 PO: How did you come up with the main protagonist Rosalind?

AF: Rosalind evolved fairly organically. She fitted in naturally to the story I wanted to tell. I’d drawn a female character in Elizabethan dress a number of times just for personal fun, and I found she was taking on a ‘look’ quite early on. As the story evolved in my head she slotted in to place. I wanted her to be a tomboy eschewing the feminine dress of the time, that much I was sure of, the rest followed.

PO: John Dee is a prominent figure in the story, he’s obviously going to attract of interest, are you taking any liberties with him or are you sticking to the facts?

AF: I stick to the bullet points – so to speak – of Dee’s life: the dates he does things etc. But I’m not a slave to history, something which can be both good and bad in telling a story depending on what you are doing. However with a fantasy there’s no obligation to be literal, so I can mix my story in with the facts. Dee is fascinating and he features prominently, but this isn’t a story about him.

PO: Which comic books are you reading right now?

AF: Well, I tend to obey the unwritten (or maybe written) rule of not looking at too much when creating one’s own story. However, that being said, I have Neil Gaiman’s Sandman follow up to read (I was an addict first time round), but it sits on a pile of books about the Elizabethan period, another about Rudolf II of Prague, (one of Dee’s sponsors) and a biography of Jack Parsons – the rocket scientist and magician, who like Dee, also mixed the esoteric and the scientific. Most of my comic reading was temporarily put on hold whilst writing and drawing The Shadow Glass.

The Shadow Glass #1, written and drawn by Aly Fell, is set to be released on March 23, 2016 from Dark Horse Comics.