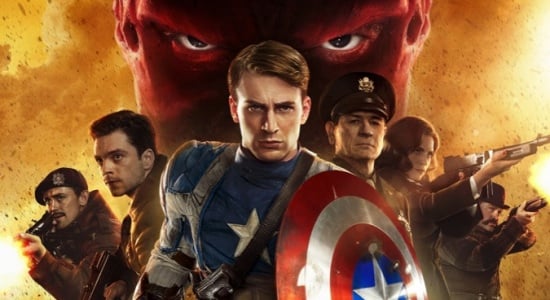 Truth & Justice = The American Way? Is this concept an anachronism in the wake of the wars that our colonial cousins have waged during the intervening chasm between the noble Second World War and today’s resource driven mêlée? When you consider Mỹ Lai, Guantanamo, Fallujah and Sarah Black’s Friday, will the full horror of their war crimes forever tarnish the noble principles of the founding fathers? Well, the answer to that won’t be found here as this is a film review site, you’d best bugger off to Time or The Economist as we’re here to talk about Captain America: The First Avenger, the last superhero blockbuster to invade the silver screen, and the final pinch of ingredients prepared in the formulation of next year’s much anticipated Avengers tent-pole movie. The trailer for The First Avenger was less than inspiring and frankly Captain America has always struck me as a particularly dull superhero (what kind of weapon is a shield, anyway?) but what else are you going to do on a Sunday afternoon? In tandem the film had got some reasonable nods of a popcorn fodder variety – ‘nothing special but there are worse ways to past a couple of hours’ – so after the pleasantly entertaining X-Men experience I thought I’d take another gamble. Whilst that movie still remains the best of the recent crop of stupidly garbed, adolescent, Nietzschean power fantasy movies I’ll concur that Captain America was actually OK, whilst you won’t exit the theatre fist-pumping your friends (that sounds ruder than I meant) and yelling ‘U S A, U S A’ you won’t be hailing a cab to nearest bookstore to acquire a copy of Das Kapital, either.

A contemporary prologue amidst a frozen tundra begins our tale, it seems that a group of Arctic scientists have discovered a mysterious vessel cocooned in the ice. Sent in to investigate a local government squad penetrates the craft and makes a hesitant scan of its interior, unearthing an enigma – a strangely garbed figure, entombed in the ice. Back to 1941, Brooklyn, New York City and local boy Steve Rodgers (Chris Evans) has once again failed a medical test that he needs to pass in order to join the marines and serve his country in its greatest hour of need. Rodgers, instantly recalling one of the those adverts that you used to get in US comic books of the quivering weakling getting sand kicked into their faces on the beach by the muscular jock is a walking medical dictionary of ticks and deficiencies, but his soul is strong and his unswerving patriotism and tenacious character is spotted by government scientist Dr. Abraham Erskine (Stanley Tucci) who recruits Rodgers for a secret project. Prompted by an imbalance to Hitler’s secret weapon and technology division knownas  HYDRA, the allies are developing a counter weapon of their own, a super soldier through the secret use of a super secret super soldier serum, a risky enterprise using technologies that Erskine stole from the Nazis when he defected back in the late thirties. Before he fled the shadowy clutch of the Aryan state, rising party member Johan Schmidt (Hugo Weaving) had submitted himself to the same treatment with terrifying results, prompting grandiose visions of..erm…grandeur. Now he roams occupied Europe in search of ancient magical Teutonic artefacts that can potentially be aligned to the war effort – and it looks as if he has found something more powerful than even the Führer had imagined. These combatants come into conflict after Rodgers endures an embarrassing stint as a patriotic puppet who tours the country to promote war bonds (quite why he isn’t sent straight into battle is not explained), abandoning this mission he violates orders and penetrates a Hydra base to rescue his friend ‘Bucky’ Barnes (Sebastian Stan) whose unit has been captured by the forces of darkness, a group whose stature in the hierarchy of evil is growing so swiftly that their plans for world domination are already accelerating past the Third Reich’s.

Here is a superhero film that is better than expected, but still not half as good as it could have been. After an interesting, well conceived set-up to Cap’s genesis, the second act falls apart with a string of ill conceived, unconnected action scenes as if the suits were demanding some more explosions to keep the punters happy, some tiresome character moments are then inflicted upon us before the film somewhat redeems itself with a vaguely exciting denouncement and final show down with the Red Skull aboard his flying strato-super-duper-fortress. Chris Evans as smiling Steve Rodgers makes up somewhat for his appearances in the Fantastic Four movie fiascos and he’s just how I remembered Cap from the few comics of his I read during my ill-spent youth – chisel-jawed, quietly noble, humorless and insipidily bland. Hugo Weaving as usual does good Übermenschen with the silver screens best Werner Herzog impression yet, I mean when you’re kicked out of the Nazi party for being too evil then you really must be pretty darn evil indeed. Support from the likes of Toby Jones as Red Skull henchmen #1 Dr. Zola recalls a more snivelling Toht and Stanley Tucci produces ze verst Jerman Aczent I hev herd in ajes, as the faltering love interest the delectable Hayley Atwell smoulders in her 1940’s figure hugging uniform (she’s a rising starlet who’s going to go far, believe you me) and Tommy Lee Jones evidently has a new farm in Montana to he wishes to acquire. One frankly embarrassing development is the formation of Cap’s super-combat super-support super-team which is so blatantly market researched that a Microsoft Windows 7 advertising executive would be ashamed, including as it does the token black dude, a stiff upper lipped British officer, an American oriental chap (hello, can anyone spell internment camp?) and Band of Brothers star Neil McDonough as the shotgun wielding Timothy ‘Dum Dum’ Dugan. It’s fairly exciting stuff once some of the cartoonish character building stuff has been surpassed, SFX whiz Joe Johnston (he worked on the likes of Empire, Jedi, and Raiders, which the film has a couple of amusing references to which I won’t spoil here) handles the pyrotechnics well, the early scenes of Evan’s head bolted on to the body of a puny weed’s slumped frame is particularly eerie but convincing, and he certainly gets the 3D effects right with a few moments where you will be ducking in your seats as a spinning stars’ n’ stripes emblazoned Vibranium cylinder is hurled toward the screen. Full marks for also having the guts in making this hero a soldier who doesn’t shy away from killing his enemies, not merely rendering them unconscious in a gentlemanly fashion; the film is set in war after all, and the film’s kid-friendly rating doesn’t cause the filmmakers to shy away from some amusing abrogations during the final conflict. Throwaway pap of an entertaining type, Captain America is worth a look as a fore-runner to next year’s Avengers movie, which is beginning to provoke some faint stirrings of excitement, so be sure to stick around for the end credits to see a tiny glimpse of what may be in store.