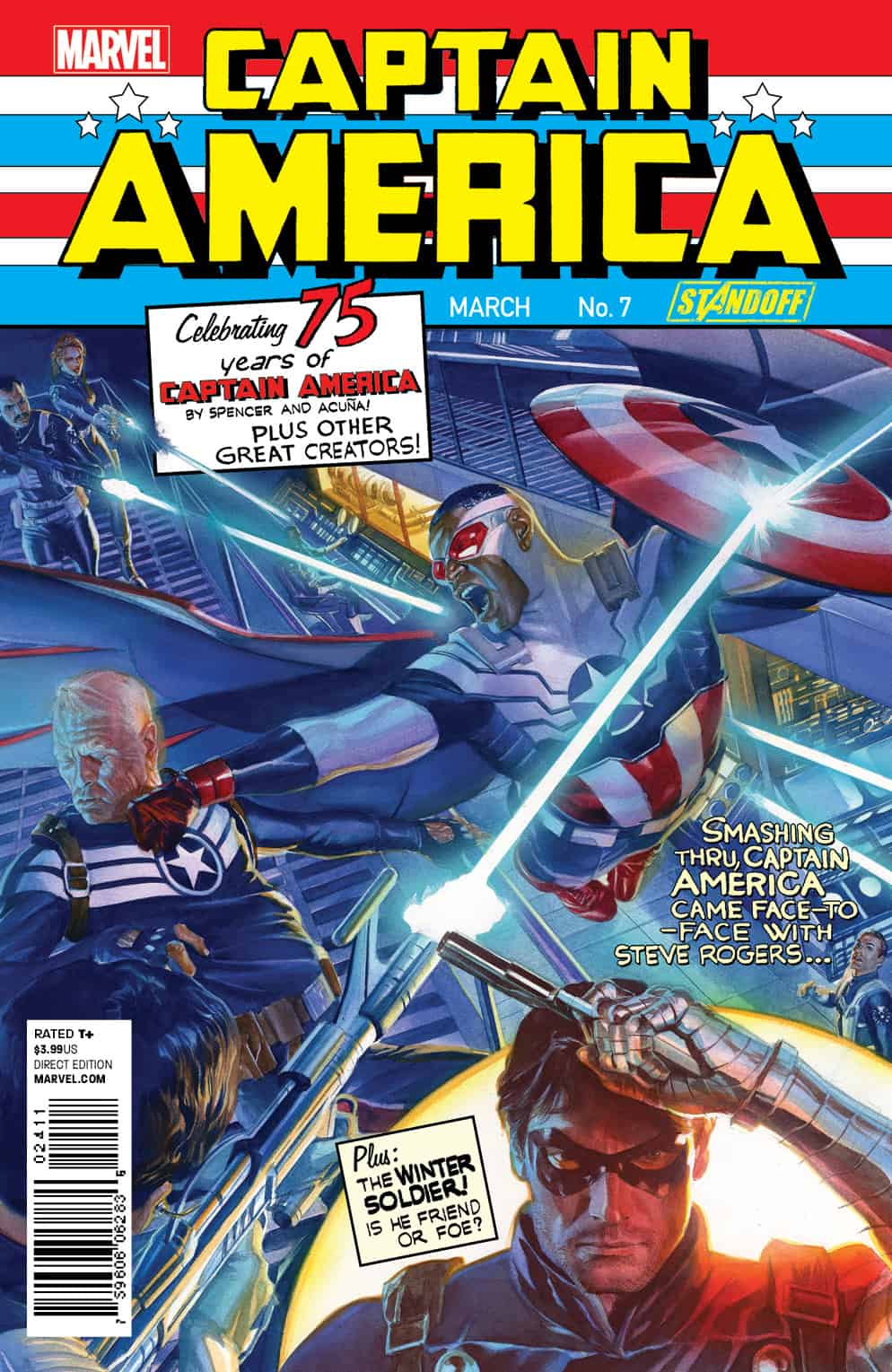 Marvel Comics decided to celebrate the 75th anniversaries of their most iconic characters, Captain America, by placing him smack dab in the middle of the “Avengers Standoff” crossover. However, writer Nick Spencer and artist Daniel Acuna do right by Steve Rogers while furthering plot of the “Standoff” storyline, which is actually quite intriguing. The plot of “Avengers Standoff” up to this point is that the Whisperer (basically the Edward Snowden of the Marvel Universe and revealed to be Rick Jones) alerts the world to a SHIELD program called Kobik, which is part of the Cosmic Cube used to rewrite supervillains’ memories to make them innocuous and safe to be in society. This program has turned into a little girl named Kobik, who lives in the Stepford Wives meets Pleasantville town of Pleasant Hill. Unfortunately, long time Baron Zemo has messed things up and “woken” up the villains of Pleasant Hill so the current Captain America, Sam Wilson, and the Winter Soldier, Bucky Barnes fresh from space, are there to investigate and save both Steve Rogers and Maria Hill from their captors. Their scenes are mostly exposition (which actually helps people who are behind on the crossover like yours truly), but artists Angel Unzueta and Matt Yackey give us some fun team up action cutting up panels to show a nice tandem move featuring Captain America’s shield from Bucky and Sam even if their art lacks the raw emotion and power of Acuna’s in the Steve Rogers story.

And even if Sam Wilson’s name is on the cover of the comic, this is mostly Steve Rogers’ party as Spencer and Acuna show his heroism and determination even if he is a frail old man bereft of his trusty Super Soldier serum. Acuna shows how weak and vulnerable Steve Rogers as he opens with a full page shot of him getting his face caved one with blood and wrinkles everywhere. This “near death experience” acts as a framing narrative for mucho flashbacks from Spencer as Steve examines his relationship with Sam, Bucky, and the role of Captain America as well as showing how he ended up a captive of Crossbones. There’s even a great character beat for Maria Hill, who came up with the idea for Kobik and Pleasant Hill, and wanted to use the Cosmic Cube on herself so she could live a normal, idyllic life and not have to deal with the cutthroat, morally grey world of being the head of S.H.I.E.L.D. It would be the perfect clean slate. 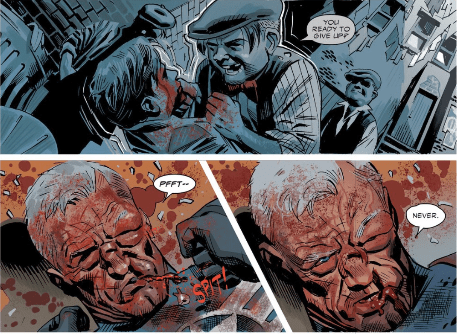 It’s already been announced that Steve Rogers is going to be Captain America again so him getting the super soldier serum back via Cosmic Cube magic is no surprise. (The scene kind of parallels Bucky getting his memories back at the end of Ed Brubaker and Steve Epting’s “Winter Soldier” arc.) But the journey there is extremely true to the essence of Captain America, who has always stood up to bullies even when he is “Skinny Steve”. Steve is willing to die or get beat up to a bloody pulp to protect this young girl, who just wants to bowl and be happy, even if she is the personification of the Cosmic Cube. Acuna uses plenty of red when Crossbones beats on Steve to show how close he is to bleeding out before unveiling a double page spread featuring all the people who mattered in his life. And the ending of the main story is truly cathartic and definitely made me want to continue reading this crossover and check out Spencer’s upcoming Captain America series featuring Steve Rogers.

But the real treat of Captain America #7 is a trio of backup stories that are the perfect 75th anniversary homage to Steve Rogers while exploring a different facet of his personality. There is reunion of Astonishing X-Men co-conspirators Joss Whedon and John Cassaday as they tackle why Captain America chose a shield as a weapon. Throughout his career, Cassaday has established himself as a master of capturing iconic moments, and Whedon gives him several great ones in his script, including using a Liberty bell to take out a tricked out Nazi tank or defending some civilians with a Washington Monument shaped thing. Sure, it’s on the nose, but subtlety has never been the strong suit of a character, who literally wears the American flag. And Whedon and Cassaday show that Captain America has always been about protecting those weaker than him and not being the aggressor even though he’s quite good at punching. 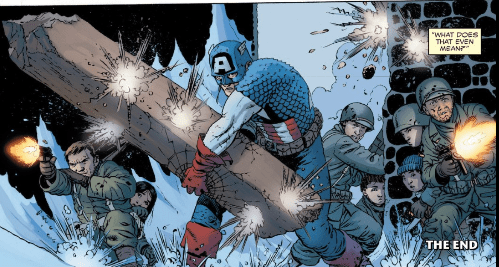 The other two backups are by Tim Sale and, in an homage to Ed Brubaker’s excellent run on Captain America, Greg Rucka and Mike Perkins. Sale’s story pays tribute to the dynamically choreographed action scenes that have permeated Captain America stories since the days of Jack Kirby and Jim Steranko as he uses a diagram style layout to show Cap breaking into a HYDRA base to get something important from his past. And then like he did in Superman For All Seasons, Daredevil Yellow, Spider-Man Blue, and a host of other stories, Sale piles on the emotions with a tearful flashback to Steve talking with his Irish immigrant mother as he reveals that the treasure wasn’t the Cosmic Cube or some other multiverse shifting MacGuffin, but a signed Babe Ruth baseball from a game they both attended. (But wouldn’t Steve be a Dodgers fan because he’s from Brooklyn?) Still, it’s an action packed short that has a touch of an emotional pathos like all good Captain America stories where he deals with sadness from his past, but still kicks star spangled butt.

The Rucka/Perkins story features a refined espionage noir art style as Steve Rogers goes undercover at the ballet to prevent an assassination with Black Widow directing him. There is a great dash of humor in Rucka’s dialogue as Steve said he would prefer watching Sharknado to the ballet although he falls in love with the grace and skill of the great dancer Korsakova. Perhaps this is because dancing mirrors the choreography of a fight scene shown by Perkins cross cutting between the prima ballerina and Steve taking out the would be snipers. The story ends with a touching interaction between Natasha and Steve as she very slightly opens up about her past talking about how ballet has influenced her fighting style and a perfect homage to the character driven, spy stories that Ed Brubaker wrote on Captain America with artists like Steve Epting and Perkins himself.

Sam Wilson Captain America #7 doesn’t focus a whole lot on its title character beyond a great fight scene and heart to heart with Bucky in the early going, but there is a great moment where Steve admits that he respects and trusts Sam despite having differences over what he should do as Captain America as Crossbones beats him up. It’s mostly Nick Spencer and Daniel Acuna’s tribute to the character of Steve Rogers while simultaneously a game changing moment in the “Avengers Standoff” crossover, but a few confusing moments aside, it’s worth picking up to see Steve Rogers written well and heroically even if you haven’t kept up with the “Standoff” storyline. And this exploration of Captain America’s qualities of courage, standing up for the little guy, and genuine care for the friends he made over the years extends to the backup stories of which the Whedon/Cassaday one is the highlight as they lay out the heart and soul of the character in nine fluid pages.