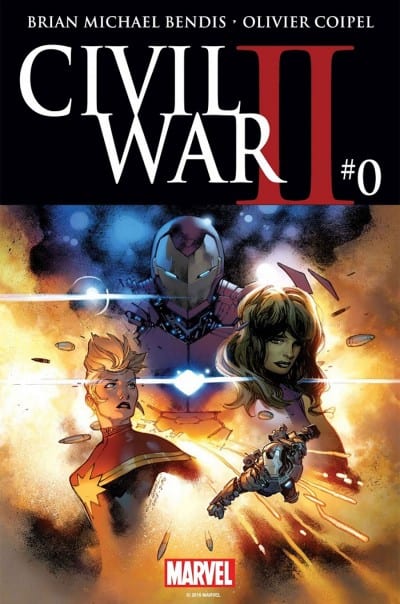 Even though titling a comic Civil War II just after Captain America: Civil War was released seems like a shameless cash grab, writer Brian Michael Bendis and artist Olivier Coipel use this zero issue to set up the theme and conflict of the series, which straight from Philip K. Dick’s Minority Report. The question is, if given the chance, should we prevent crimes before they happen? Of course, there aren’t any answers so far, but Bendis plays to his strengths and focuses on individual characters’ ideas about the question, including Captain Marvel, who will be going up against Iron Man in the main series. Olivier Coipel’s clean, yet cartoonish style is a great fit for superheroes wrestling with their inner demons, and he even puts on a little bit of razzmatazz at the end with the help of colorist Justin Ponsor to hook readers for the series to come.

In the plot, Bendis and Coipel focus on the characters of She-Hulk, Captain Marvel, War Machine, and a Ulysses, an Inhuman teen who goes from an awkward teen to a precognitive. For now, Ulysses seems like a plot device as Bendis makes him basically a carbon copy of Peter Parker with the awkwardness and without the scientific knowledge before he transforms in the Terrigen mist. However, his abilities allow the ideological debates that Captain Marvel and She-Hulk engage in with Doc Samson and Maria Hill to transform into something universe altering as he is literally the answer to Captain Marvel’s desire to prevent catastrophes before they happen.

Bendis creates a thematic connection between Captain Marvel and She-Hulk’s plots as Carol is afraid of a day when superheroes aren’t enough to protect the Earth and wants more reassurance while Jennifer wants to protect the rule of law and right to a fair trial as she defends a former supervillain, Jester, who is on trial for merely talking about his past life. Captain Marvel’s wanting to take stronger measures against threats sounds dangerously similar to be Maria Hill being okay with Jester getting killed in prison because he would commit crimes in the future. Carol’s principles are altruistic, but they could potentially lead to something like Hill was talking about. For now, both characters’ point of views are sympathetic, which is more in line to the Captain America: Civil War film instead of the Civil War comic where Iron Man was basically a villain until Captain America started working with the Punisher, and he ended up becoming a martyr any way. 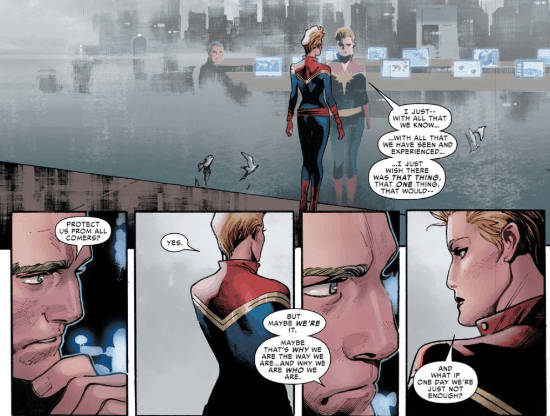 Justin Ponsor’s colors add to the foreboding and clandestine feel of Civil War #0, and you can feel that superheroes are about to do something unethical. Even though it seems like a promotion, War Machine’s chat with the president feels like a backroom deal because of the darker reds and purples that Ponsor uses to go with Coipel’s use of black space. And everything around Carol, except for her costume, is a bleak grey to draw attention to the moral ambiguity of her actions, and those of Doc Samson, who isn’t there as a friend, but as a representative of someone else. Civil War #0 is mostly talking heads, but Coipel keeps the issue interesting by using a variety of panel lengths, character gestures, and emotional reactions hitting the sweet spot between cartooning and photorealism.

See also  Transformers: More Than Meets the Eye # 19 is a Storm of Exposition and Revelation

It is nice to see Bendis taking character beats from her series and using to make the summer event more organic. However, this could turn into Minority Report if she’s not careful, or works with Maria Hill. Add Olivier Coipel’s sleek art that is still full of life, especially when Carol is feeling the stress of being responsible for the defense of Earth, and the event is off to a fairly promising start.