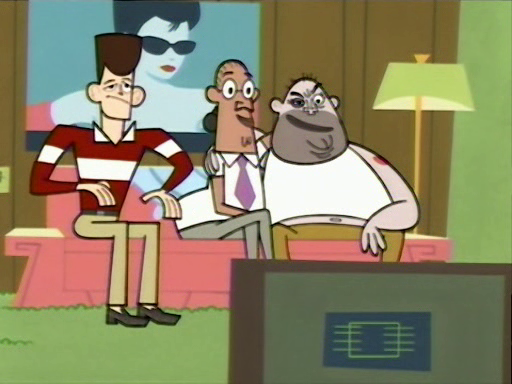 ‘Homecoming’ begins with one of the show’s best opening scenes: it’s time for the homecoming rally, and none other than 90’s ESPN regulars Dan Patrick and Chris Berman are there to cover the telecast. But there really isn’t a telecast: Dan’s spouting phrases like “You said an expository mouthful, my versatile friend” into a balled fist, and the ham-handed Berman points out his mic isn’t plugged in and there really isn’t a camera on them. It’s a brilliantly written sequence, right down to their voices sounding like they’re broadcasting on radio – and sets the tone of the episode, where things aren’t really what they appear to be at first.

I’m talking, of course, about John D’Arc, more well-known as the mustachioed version of Joan of Arc, who joins the shitty basketball team in hopes of scoring some points on the court (and possibly in Abe’s pants). Her disguise is really the crux of the entire episode, playing into everything swirling around the upcoming basketball game with Gesh (another school of mutants, but better at athletics), including the Abe-Cleo-Joan love triangle, Scudworth’s laundry bet, and – my favorite – JFK’s sexual journey.

Even though he spends most of his time as an ancillary character, JFK’s undeniably the biggest scene-stealer on the show, and ‘Homecoming’ is one of his finest moments, right up there with ‘Litter Kills’ later in the season. After his booty detector goes off in the locker room, JFK finds himself undeniably attracted to Joan, who he of course thinks is a man. The confusion leads him to one of the show’s greatest scenes, where his two gay unshaven parents remind him that “switching channels” might be scary to think about, but it’s nothing to be afraid of.

Most comedy shows of the era would be content with having JFK run around like a homophobic animal for the entirety of the episode, only to learn in the end that gays are just regular people, too. So when JFK actually embraces the idea and starts to engage John D’Arc in homo-erotic suggestions (“… I’m alhways OPEN for anything!!!”), it makes it that much more hilarious. Not many shows will let their most masculine character explore his sexuality like that, whether as subtly done as it is in the scene I’m talking about, or in a more overt fashion – as it does in the end, when Cleo finds out that John is really Joan, and she’s kind of proud that she was so turned on (“Miiiiiillkkkk”) by the weirdly-shaped Clone of Arc.

On top of being a hilarious Some Like It Hot parody, ‘Homecoming’ provides a plethora of other ‘high school’ stories for the talented creative team to run wild with. Like I said before, everything in the episode stems from false appearances: be it Geshy, the rival’s mascot who turns out to be an animal-eating monster, or Toots blindness keeping him from being in the NBA (turns out it was racism). Plus, it crams in classic references like Scudworth dressed as every high school basketball coach in 1970s sports movies, Gesh’s Nazi Academy (including Minister of Comedy Detlef Schrempf), and talking about sex while at the gym – in other words, ‘Homecoming’ is another showcase episode of the short-lived series, with rapid fire jokes and spot-on pop culture parodies that still feel fresh over a decade later.

– Geshy is one of the most disturbingly cute things ever. It runs around screaming “Candy! Candy!” while hugging Ghandi and killing dozens of animals and people…. definitely one of the weirdest things Clone High would ever do.

– JFK, upon finding out that John was really Joan: “Goodbye Will and Grace…. hello Daaahma and Greg!!!”

– Butlertron’s speech to Joan utilized a rarely-heard third voice inflection for Butlertron, though not on my favorite line: “Thirty-eight perrrr-cennt.”

– Quote of the episode goes to JFK in the locker room: “That’s no way to treat a member of the team! Especially one whose skin is so silky smooth… and by that I mean someone as smooth on the court as-uh his skin is silky… I mean thighs are milky… I have to go!”

– notice how we never actually got to the Homecoming dance everyone was excited for… one of the running jokes the writers wanted to include was having a prom or major dance in every episode, something that was eventually cut during its conception.

– Scudworth: “Damnit!!! Would everyone in a fake moustache PLEASE leave…. now do this for me… SHOOT THE DAMN BALL!”