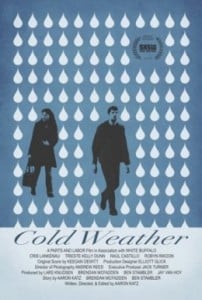 About midway through Cold Weather, director Aaron Katz decides to make something happen. That is to say, that little has happened to that point. The tale of Doug’s (Cris Lankenau) aimless return to Portland, his friendship with fellow ice factory-worker Carlos (Raúl Castillo), and his relationships with his sister Gail (Trieste Kelly Dunn) and ex-girlfriend Rachel (Robyn Rikoon) remains moderately interesting if not slow-moving for the first half of the film.

Then Rachel mysteriously goes missing. And Cold Weather starts to magically click together. Luckily, Doug studied forensic science before his foray into the ice world and, though he misses obvious clues along the way, he leads the charge into a mystery that falls somewhere between Blue Velvet and Hannah Takes the Stairs.

Cold Weather is as much a relationship drama as it is mystery, which is furthered by its abrupt ending. The real highlight of the film is not the gradual reveal of the sinister plot, but the glee that Doug takes in his newfound hobby, even going so far as to buy a pipe in order to think like Sherlock.

Doug’s search actually involves little-to-no forensic science. He roots through a motel trashcan, navigates a pornographic website, and cracks a numerical code involving obscure 1970s baseball statistics. In short, his education proves no more useful and is not validated via the investigation. Instead, it’s the fact that he’s gotten off the couch that makes it all fulfilling. While there is a mystery that must be unraveled, most of the unraveling is done in a long explanatory speech by Rachel. A technique that might prove laughable in any suspense film where the investigation is the focus, in Cold Weather it’s ironically an effective mechanism to move past the thriller and back into the relationship aspects of the film.

Much credit is due to the cast of unknowns and Keegan DeWitt’s excellent score. Raúl Castillo is particularly enjoyable to watch as the blue-collar character who constantly plays against stereotypes in his love for Star Trek and gentle honesty.

The frantically fun final act of Katz’s film erases the boredom of the first, where we are treated to amiable but under-edited scenes of Doug on the

couch, Doug at a club, Doug playing cards, and Doug moving ice. Katz so pulls us into the exhilaration of the chase that when the film cuts to black it’s a disappointment – not in an unsatisfying ending, but that the film is over.