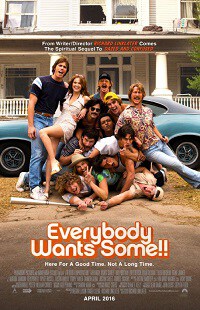 Everybody Wants Some!!
Written & Directed by Richard Linklater
USA, 2016

The need for a “spiritual sequel” to Richard Linklater’s stoner opus Dazed and Confused is debatable, but Everybody Wants Some!! is a nostalgic peek at that carefree window between the fall of Nixon and the rise of AIDS. This is a modest film that aspires to be nothing more than an unabashed celebration of youthful exuberance.  There’s dancing, debauchery, bong-induced philosophizing, and more dancing. Everybody Wants Some!! supplies what the Cineplex is desperately lacking; escapist entertainment with a brain.

In the land of cheesy mustaches, the man with a mustache comb is king. The late ‘70s and early ‘80s were cluttered with these kings amongst men.  They drove big cars with ungodly sound systems (completely wasted on the crappy 8-tracks and cassettes throbbing in their tape deck), most of their clothing had stripes, and they could sing every verse of “Rapper’s Delight” without the slightest hint of irony.  Political correctness was still just a gleam in Bill Clinton’s eye, and women’s shorts reached heights that would make even a sex-positive Millennial blush.  In other words, it was a glorious time to be young and have testicles.

Despite a sputtering start, Everybody Wants Some!! ably captures that spirit of reckless indiscretion and good-natured idiocy.  It’s the summer of 1980 and a college baseball team has re-convened for another season of laying the lumber.  School starts in a few days and incoming freshman pitcher, Jake (Blake Jenner), is trying desperately to bond with his eccentric teammates.  His hillbilly roommate (Will Brittain) is stressed about a High School girlfriend being one day late for her period, upperclassman Finn (Glen Powell) has a theory to explain every hook-up scenario, and fellow freshman Plummer (Temple Baker) sounds like he gargles cigarettes for breakfast.  And nobody wants to deal with the ‘bonus baby’ pitcher (Juston Street) who is the walking embodiment of ‘roid rage. 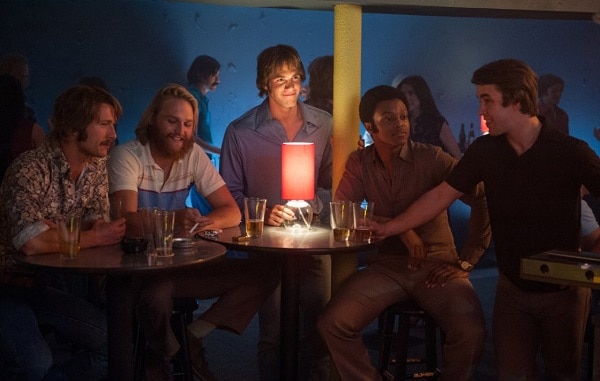 Everybody Wants Some!! suffers from a serious case of ‘Noonan Syndrome,’ in which the main character is much less interesting than everyone else around him (see: Noonan, Danny – Caddyshack).  Jake is a likeable zero who’s routinely upstaged by his colorful supporting cast.  It takes a solid 30 minutes to get a feel for everyone, most of which is spent on an extended tour of the local bar scene.  From dancing under the mirrored ball at a disco or riding the bucking bronco at a country music club, to getting trampled in the bone-crushing mosh pit at a punk bar, our crew seeks their elusive quarry with much vigor.  When their transparent attempts to blend into the ever-changing landscapes are questioned, Finn rationalizes, “It’s not phony… it’s adaptive!”

After this extended setup, Linklater finds a comfortable groove. His trademark verbosity is pitch-perfect for college, where late-night chats can quickly (d)evolve into existential explorations.  Technically, this is a baseball movie, but it feels more aligned with raucous camp films like Wet Hot American Summer and Meatballs.  There is no ‘big game’ here; only a scrimmage that features the team’s surprising skill and a predictable meltdown from Juston Street’s hilariously-competitive prodigy, Raw Dog.  Baseball is merely an excuse to collect these wacky personalities under one roof and see what happens.  It’s all about the pain and exhilaration of an outsider being accepted into the inner circle, whether he likes it or not.  And dancing… lots of dancing. 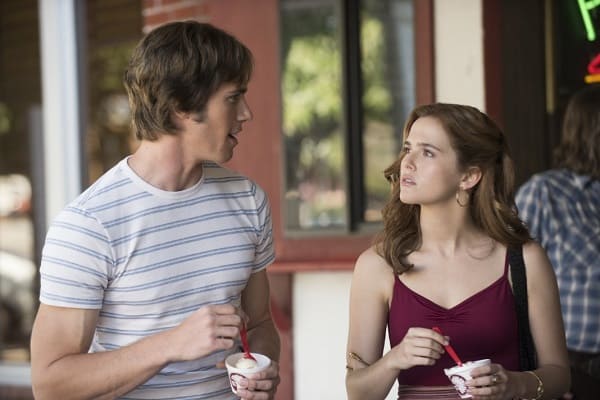 Though it comes as no surprise, it’s still a bit disappointing that Linklater couldn’t find room for a substantive female role. The aforementioned camp films all found sneaky ways to incorporate women into the sausage-fest.  The closest Linklater gets is Beverly (Zoey Deutch); an art student that Jake clumsily woos with a flower and a Walt Whitman poem taped to her door.  A cynic might argue that Beverly exists only because the jocks need an excuse to crash the big art school party full of weird creative types.  Sadly, an optimist would be forced to agree with the cynic.

One of the film’s purported selling points, the soundtrack, is also a bit disappointing. From ubiquitous tracks like Blondie’s “Heart of Glass” to “My Sharona” by The Knack, Linklater and his musical staff drive straight down the middle of the classic rock highway.  Dialing back the nostalgia in favor of a few interesting B-sides might have greatly benefitted Linklater’s story.  The closest we get to non-AOR is a relatively obscure (though brilliant) cut from Pink Floyd’s Meddle called “Fearless.”  Otherwise, the soundtracks to Everybody Wants Some!! and Forrest Gump should go into a space capsule so the aliens can better understand ‘White Americana.’

Small qualms aside, Everybody Wants Some!! shows us a good time.  It gently suggests that assimilation and affiliation can occur without sacrificing individuality.  Linklater beautifully captures a fleeting moment in time; for an individual, an institution, and a nation.  Even if you don’t remember that time, or you weren’t born yet, the passion and camaraderie will ring just as true. Everybody Wants Some!! makes you happy to be alive and more than a little wistful that college is over.