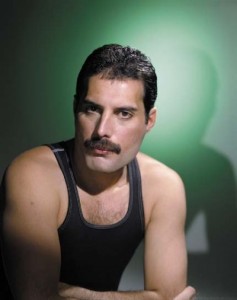 Last September, it was reported that Sacha Baron Cohen was attached to play Freddie Mercury in an upcoming bio-pic to be written by Peter Morgan (Frost/Nixon). GK Films is partnering with Robert De Niro and Jane Rosenthal’s Tribeca Productions and Queen manager Jim Beach on the film’s production, and it’s due to begin shooting next year.

Well now the screenwriter has revealed some more details about the film, stating that it will focus on Mercury’s life, from the early days of Queen to the band’s legendary performance at Wembley Stadium for Live Aid in 1985. However Morgan also went on to say that the movie would not examine Mercury’s final years and his AIDS-related death in 1991.

“I didn’t want to write an AIDS movie, to be honest with you,” Morgan told Cinema Blend. “I just looked at the period– It’s sort of where he rejects [the other members of Queen] and comes back to them. It’s sort of like a family movie. It’s sort of like ‘I hate my family, I want to be independent, and then I come back.'”

Later in the week, Queen members Brian May and Roger Taylor revealed more details about the film at Queen Online while mentioning that they are also developing a Queen musical titled We Will Rock You.

Hit the jump to read their full statement.

“QOL is entering a new phase in an important year for Queen, in our 40th Anniversary year. To launch our new record deal with Island Records, there will be a lot of activity. A huge amount of work has already been put in behind the scenes, to unleash a completely newly mastered set of the original Queen LP’s and CD’s. I know our fans will appreciate the attention to detail, bringing the early albums closer than ever to the magic of the Vinyl originals, but with the benefit of up-to-the-minute quality technology. Preparations are also well under way for the “Stormtroopers in Stilettoes” exhibition in London in the Spring, which will highlight in some innovative ways the growth of the ‘Early Queen’. Work is now fully under way for the much-vaunted feature film on the life of Freddie. Peter Morgan has delivered a first draft of the movie, which everyone is very excited about, and Sacha Baron Cohen is chomping at the bit to get into the role, in a way which certainly would delight Freddie ! The whole team now working on preparing for a shoot later this year, and a release in the late Autumn of 2012. We are also laying the foundations for WWRY THE MOVIE, and again, we already have a great script for it from Ben.”

“Roger and I will be working together on new WWRY theatre projects, too, beginning with the imminent launch of the show in Norway next month. And we have a couple of interesting new buns in the studio oven, about which more soon. I will be doing some selected UK dates bringing ‘Anthems’ to life with Kerry Ellis in concert halls, including the Albert Hall in May. But Roger and I keep an ever-open door for ideas for Queen, the band, which, somehow, refuses to lie down! “

“WOW!!! 40 years of Queen. Who’d have thought it? As Brian’s given you all the info on our 40th year, i’ll keep it short. I can’t believe it’s been that long and that we are still around in such a big way. Amazed and grateful !!!”