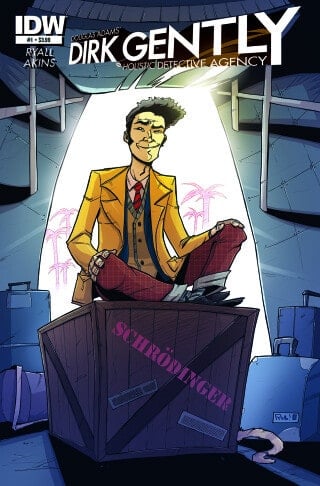 Douglas Adams’ Dirk Gently’s Holistic Detective Agency  is based off on the novel of the similar title, but with a new tale to tell. Writer Chris Ryall bought Dirk Gently to the comic world with a new plot and a sequel to Douglas Adams’ work.  Ryall’s writing reflects the style of Adams’ writing with sharp and silly wit.  Ryall’s best moments in his writing come from strong character moments. The different artists have good teamwork and combine to create a pulp fiction feel similar to older mystery novels, but there can be small problems with odd body proportions.  The story follows Dirk in his adventure in the United States. He leaves England to come to San Diego due to economic and personal reasons. Once in San Diego, two reborn Egyptians awaken from their slumber and begin to cause chaos. Alongside the chaos of the ancients, two killers are going about slaying people. Many different happenings occur to cause Dirk to be on the case.

Ryall’s writing shines in the intimate character moments. The best examples are Crowgher, a homeless man in the story, and his lament over his friend’s death. The moment with Crowgher is tender and sad in its tone as he delivers his information to the others. Ryall provides strong character development and adds to the heaviness of the mystery. Another character moment in the comic that stands out is when Dirk starts an impromptu tour of San Diego with a bunch of tourists. Dirk’s actions reveals his knowledge of how everything is interconnected. Ryall’s strength in allowing the characters to development allows for both light hearted moments and darker tones.

When looking at the comic, it is best to keep in mind how the differences from the novel and the comic may occur. It is true with the artwork there may be some liberties with the depiction of Dirk’s appearance and minor flaws in body proportions. ButRyall’s writing provides building of the mystery and humor keep a quick pace.   Altogether, Douglas Adams’ Dirk Gently Holistic Detective Agency would be great for fans of Adams and lovers of mystery.