Mere weeks after Warner Bros. and Mattel went their separate ways over the He-Man film project, Columbia has entered the picture and is in negotiations with the toy franchise. 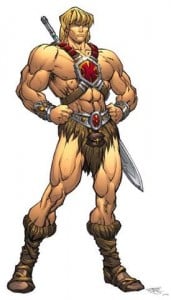 Warner Bros. had dropped the project because of numerous problems such as multiple script rewrites, a new writer brought in at the last minute, and the film catering to a small niche market – essentially those people who remember the show from the ’80s. An even smaller market if you only count those who liked the show. The entertainment giant actually remade the program some time back, but with little success.

Escape Artists is said to be producing and if they stay true to the 1980s version, the story should follow the warrior Prince Adam who would turn into the Conan-like hero after uttering the words “By the power of Grayskull — I have the power,” and stabbing his sword at the sky above. He-Man had allies of course – Battle Cat, Man-at-Arms and Orko – and with them he defended the planet Eternia from the wicked ways of Skeletor whose sole objective was to destroy Castle Greyskull, the source of He-Man’s powers!