One of the main problems that a show like Supergirl struggles with from time to time is balancing the duality of Kara as Cat’s assistant and Kara as Supergirl. From time to time the show does it sloppily, sometimes it does it adequately, and other times it gets lost in too many storylines to even keep a cohesive narrative going. “Strange Visitor from Another Planet” cleanly defines both sides of Kara’s life, integrating them so they feed into the other story with a unified theme – in this case, that of characters dealing with their regret after desertion.

In Kara’s office job as Cat Grant’s assistant, we find that Adam Foster (Cat’s estranged son whom she gave up) has come to National City to reconnect with her. This has been a plot that has been developing for quite some time as Kara had slowly been chipping away at Cat’s cold armor exterior to mend the hurt person she is inside. There is a not-so-subtle reminder early on when Adam questions Kara about Cat’s reputation that exposits how Kara sees Cat, as someone who is to be admired for being “pretty badass.” This perception that Kara has of Cat is also an indication of her ability to see the good in people, while Adam can only see the shallow and abandoning person that he believes Cat to be. The strength in this storyline stems from the performances by Calista Flockhart and Blake Jenner as Cat and Adam, respectively. Flockhart is very good at portraying Cat’s tough exterior and has also proven she can really shine when she is allowed to play her vulnerable side, and here she displays both quite flawlessly. Jenner is fair at portraying Adam’s disdain and bitterness, yet he doesn’t quite connect meaningfully with Flockhart in his scenes with her, instead faring best in his chemistry-laden scenes with Benoist.

Benoist is typically great as Kara, especially when playing her as goofy and somewhat flustered, and she gets to play up some of that charm against Jenner here, which proves that the actually-married couple has chemistry on screen as well as off. Their romance brings the possibility of potential complications that may arise between Kara and Cat, and possibly for her and Winn (who is still hurting from having put his heart out to Kara in last episode). The Winn situation is being dealt with slowly which is the appropriate way to handle it, as given enough time and space, perhaps their friendship can be healed and be somewhat believable, as it will be likely that Winn will be back, at some point, to his witty bantering self to maintain the comedic relief he offers to the show. 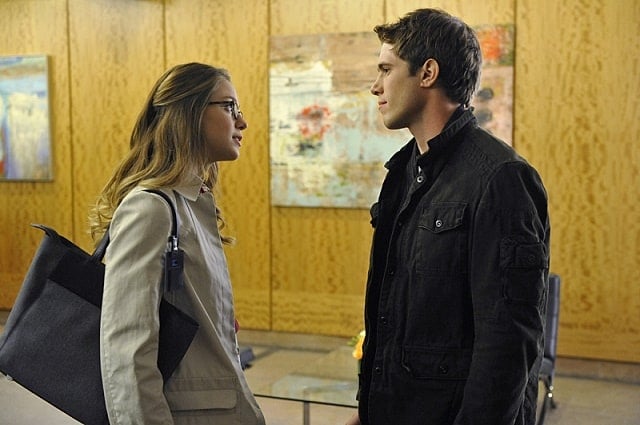 On the other side of Kara’s life, as Supergirl, the main drive comes with the arrival of Senator Miranda Crane, who, much like Maxwell Lord, preaches about the threat of hostile Aliens taking residency on earth. Crane echoes much of the same rhetoric that Lord spouted on his dinner with Alex, but Crane is given better dialogue and builds a better case when the threat is made into a reality thanks to an attack in broad day light during her speech. Tawny Cypress is just as believable as a fear-mongering politician as she is a White Martian uncomfortably cloaking her identity.

The best aspect of “Strange Visitor from Another Planet” might be the Martian Manhunter story arc. It seems like the writers are actively introducing more elements from the source material, and are doing so smartly. Hank Henshaw’s back story is given some more depth, and it’s the kind of stuff a fan of the DC universe would want to see come to life. The series introduces the White Martians into its canon, depicted here as the race that wiped out the Green Martians and, as it turns out, J’onn J’onzz’s/Hank’s family as well, which are shown in flashbacks of the massacre. The scene where Hank tells his story is excellently performed by David Harewood, and it’s given even more weight with strong production values, allowing for the appropriately horrific sight of piles of dead Martian bodies.

Much of the special effects in this episode are well done and the fight sequences are compellingly choreographed. Glen Winter’s direction throughout the episode is notably effective, particularly in the action sequences, most notably when the White Martian initially attacks the crowd. The camera moves smoothly, making these scenes kinetic, and when the White Martian is cranked in speed it looks frightening and creepy even in the light of day.

The resolution of Hank’s dilemma with the White Martian is a strong one that is oddly contrasted with Cat’s situation with her son which, of the two, is considerably lower-stakes. Nevertheless, the two storylines are tied together well by having Kara at the center of both as an active participant in each arc and somehow finding the throughline that they are both people who feel they abandoned something they wish they hadn’t, and are now trying to reconcile those emotions. Writers Michael Grassi and Caitlin Parrish manage to stabilize both stories by keeping the focus on Kara and weaving her into only two main plots rather than several loose, ongoing subplots. If the episodes preceding this one continues to maintain the focus and simplification of the narrative, it looks like the series could really begin to take flight.