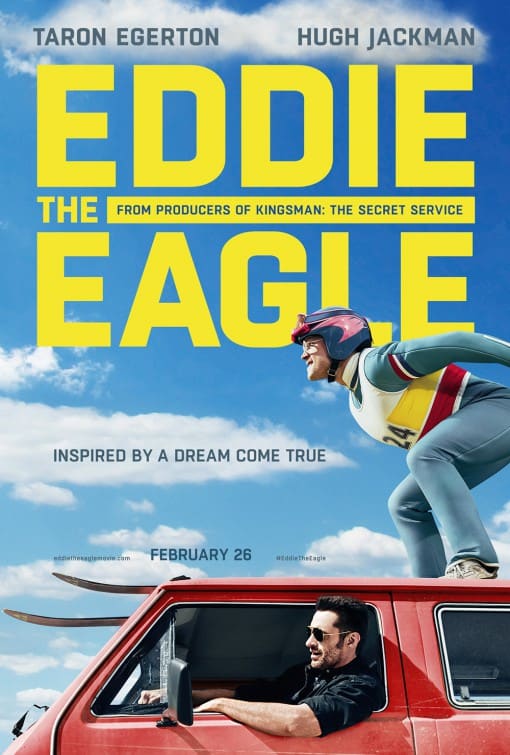 Fresh off of the success of Kingsman: The Secret Service, few would have expected Matthew Vaughn to pluck the young star from that film (Taron Egerton) and produce a film about Great Britain’s first Olympic ski-jumper. Yet as an underdog story, the accounts of Michael “Eddie” Edwards seem ripe for the picking. Everyone loves the underdog fighting insurmountable odds. It’s a rare film in the sports genre that follows the favorite to win any contest. Rocky didn’t take place from Apollo’s p.o.v., and Hoosiers wouldn’t be as interesting if they were always expected to win.

Eddie (Egerton) desperately wants to take part in the Olympics, but he’s lacking in almost every physical capacity. He lacks the correct posture and requisite grace of an Olympic athlete and is told so frequently by other skiers “You will never be Olympic material”. Down, but not out, Eddie tries his hand at another, riskier sport. Great Britain has no ski jumping team and no equipment to speak of so Eddie must do all of his training in Germany. An enormous jump handled by a klutzy rookie ends as well as one would expect (an injury). Edwards never officially had a coach, but the producers thought it wise to add someone for Egerton to bounce off of to keep the film moving. Enter former champion Bronson Peary (Hugh Jackman) to mentor the lad. Bronson is reluctant to train Eddie and would rather spend his time inside of a pint glass.

Tellingly, one of Bronson’s first acts as Eddie’s manager is scolding him for jumping the gun at the 1988 games when he could have waited until 1992 and not risked such embarrassment. Jackman avoids overpowering Egerton’s performance, but Eddie the Eagle really picks up when the star is onscreen. Ski jumping isn’t featured a lot on the cover of Sports Illustrated, or even the nightly sports recaps which would make it a hard sell for anyone who wasn’t alive during the 1988 Winter Olympics–although anyone who did watch that year will likely remember the Jamaican bobsled team made famous in Cool Runnings. 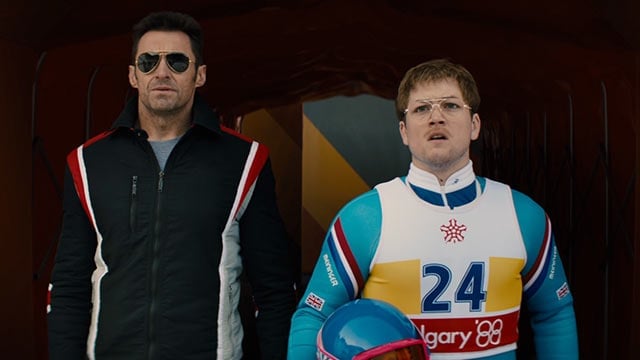 Taron Egerton is fine as the unlikely hero, who, by default, set the ski jump record for the U.K. Eddie is more child than a man in the early going, but Egerton finds the earnestness inside Eddie to keep the role from becoming a caricature. He possesses an offbeat charm as the goofy Eddie Edwards, completely shedding the street-wise agent he played in Kingsman. The film treads the very thin line between laughing with Eddie and laughing at Eddie, but Dexter Fletcher never lets it approach condescending. Perhaps one of the strongest scenes in the film is when Eddie gives a press conference and apologetically relents the spotlight to the other athletes who trained and prepared. Whether Eddie was a sideshow or a throwback to the amateurs that the Olympics used to represent is a question only briefly considered by the film, but that it’s present at all takes a critical eye to the pseudo-celebrity status that’s applied all too frequently now online.

Despite the use of a very colorful metaphor by Jackman’s character, Eddie the Eagle is family-friendly and very similar to a number of heartwarming underdog pictures. My chief complaint about the picture is that it lags considerably before getting to the 1988 Olympic games in Calgary. Until Hugh Jackman shows up, the film is largely going through the motions with a perfunctory background story. But when Eddie the Eagle works, it works. This sports flick won’t offer a revolutionary take on the genre, but anything that embraces the retro-ness of the 80s doesn’t have to.