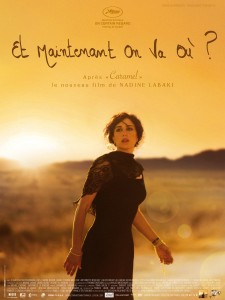 Et maintenant on va où? (English title: Where Do We Go Now?)

Men plan for war, suit up for war and engage in warfare, that is the traditional way things develop in times of international strife leading to full on combat between nations. Are men so much for predisposed to give in to humanity’s more barbaric tendencies? Are men so much more simple minded than women so as to not realize the folly of attempting to annihilate another army made up of of humans beings who have their own families and friends back home? Whatever the cause for man’s propensity to welcome combat, the women, despite what people may think considering that they mostly stand on the sidelines, come out stronger in character. In Nadine Labaki’s most recent film, Et maintenant on va où?, their strength of character is explored in some clever ways, both comedic and dramatic.

Director Labaki sets her tale in a small Lebanese town, far removed from the hustle and tussle of the larger cities and thus a bit less privy to the happenings in the rest of the country, where religious tensions between Christians and Muslims result in frequent violent outbursts. In this particular village, no tension exists at all between the two religious communities, both of which cohabit as one, peacefully oblivious to the uneasy situation everywhere else. How can this be so? Quite simply, the women of the village, from the mayor’s wife to the local baker, have invested conceited efforts in preventing any ill news from reaching the men living among them. Newspapers, television, wild rumours (which usually end up being true), all are either filtered or totally intercepted by the women. The reason for this complex strategy is brilliantly revealed in the film’s opening scene, wherein a large group of the women, all dressed in mourning black, visit the tombs of their deceased husbands, brothers, sons, cousins and grandsons. Too many have already perished due to silly conflicts emanating from unfounded reasons of rivalry. So long as the women can prevent it, not one more person, be they Muslim or Christian, will fall at the hands of hatred. When an mysterious incident that looks like vandalism occurs at the local mosque however, the women will have to muster all their creativity and audacity to appease the renewed tensions. ‘The movie, for all its charm and wit, just may be one of the blackest comedies in recent years if only because of what lurks right behind the movie’s whimsical tone.’

One the of issues an audience member may ponder on while viewing Et maintenant on va où? concerns the credibility of the picture. Nadine Labaki’s film is but a nice little ‘dramedy’ with some important life lessons everyone should follow and nothing more, so the actual structure of the plot need to be scrutinized so closely. Taking the opposite viewpoint, that is, studying the picture’s structure and set-up attentively, is a far preferable venue, especially given the subject matter. Studying it may in fact help one’s appreciation of the movie grow exponentially. Consider how accustomed people are to reading in a newspaper, on the internet or watching news television about ongoing tensions around the world, many of which explode in vicious warfare. When faced with such stark realities on virtually a daily basis, one concludes, for right or wrong, that humans, men in particular, are easily swayed into believing that the all encompassing ‘other’ is a threat and must be squashed. If such is truly the case, and history unfortunately demonstrates that in multiple chapters of Man’s story on this planet, then why not make a film in which the opposite occurs? For one, it makes for a change from the horrors depicted on film and in real life. Secondly, it makes for compelling storytelling about virtuous ideals. Thirdly, it reveals that sometimes cynical tendencies can be conducive to positive goals.

The inherent cynicism in Labaki’s film, although played at times more for comedic affect that serious drama, is that men cannot be trusted to keep the peace. Thousands of years of human history prove that point, henceforth the time has arrived to allow women to handle peacekeeping duties. Yes, a lot of it is funny, proving that director Labaki has a knack for sharp comedy, but behind the laughs is the pervasive fear that at any time something awful may break out (and nearly does in the movie). For such a delicate, difficult subject to be studied with dashes of comedy sprinkled about requires skill and a real sense of maturity, maturity that genuinely appreciates the consequences of the predicament the characters find themselves in. The director and her wonderful cast pull it off intelligently and with humanity. The movie, for all its charm and wit, just may be one of the blackest comedies in recent years if only because of what lurks right behind the movie’s whimsical tone. ‘The cast, which includes Nadine Labaki herself…, deserve plenty of credit for their work. There is nary a detectable false note.’

Of course, the story can only be played for laughs for so long. Eventually a more desperate sense of reality sets itself in, when, despite the admirable and admittedly shocking efforts the part of the women, which include bringing to town some Ukrainian call girls who essentially look like a bunch of whores, the Christian and Muslim men do experience a very serious rivalry, one that the heroines nearly fail to appease if not for a terrifically desperate, unexpected and hysterical final strategy, which of course this review shall not reveal. Much like the lighter scenes, the dramatic ones are also directed and acted with great care and attention to the feelings of the individuals involved. The cast, which includes Nadine Labaki herself who plays the Christian owner of a cafe who falls for a Muslim renovator working in her shop, deserve plenty of credit for their work. There is nary a detectable false note.

The balance between the two tones is adjusted to perfection, thus rendering Et maintenant on va où? a complete and satisfying experience. From the opening scene, it promises a clever, inventive film and lives up to said promise. The film intelligently tackles the stressful emotions related to the threat of war without ever depicting any genuine warfare at all throughout the story, a worthy accomplishment in its own right. Still, the film does far more than that, making the viewer care for what happens to the characters, both the men who stubbornly risk destroying the village’s tranquillity, and the tireless women who steadfastly refuse to allow the disturbance of the perfect balance they have created.