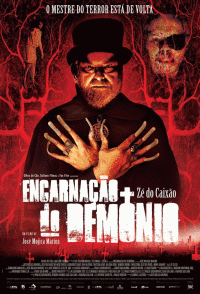 Coffin Joe. For Brazil, nothing personified horror quite like him. He’s a deceptively simple villain. He’s doesn’t drink blood, he’s not undead, he has no magic powers. There is absolutely nothing supernatural about him. Nothing. He is just an undertaker in a top hat and cape with extremely long fingernails. What strikes fear into the hearts of Brazillians, though, is his complete rejection of God. Joe’s back-story is never fully explored and that’s probably for the best, but from the start he is painted to be a man that lives strictly for himself. He’s an atheist with a personal philosophy that is similar to LaVeyan Satanists and this scared the shit out of people.

Coffin Joe was spawned from the mind of director Jose Mojica Marins in the early 60’s from one of his own nightmares and he used Brazil’s greatest cultural fears to rise to infamy. His story is simple. Coffin Joe is the undertaker in a small, superstitious village. When he’s not terrorizing the town or delivering drunken sermons to a congregation of headstones in the cemetery about the failure of God and uselesness of morals, he’s persuing his ultimate goal of immortality by impregnating his ideal woman, one of perfect beauty and a philosophy that matches his own. Anyone who gets in his way can count on a grisly death. Marins’ latest, Embodiment of Evil, is the finale of the Coffin Joe trilogy, a legacy of horror that spans five decades.

Joe has served a full term in prison for murder and is being released. Forty years has passed and he has to get back to his quest for immortality. He is picked up by his hunchback assistant, Bruno, and taken to the favelas of Rio De Janeiro to find that a group of deviants have dedicated themselves to aiding Joe on his ongoing quest. Along the way, Joe upsets the local mob of the favela and runs afoul of the cops. Simultaneously, the captain whom he blinded in one eye and the son of the priest he murdered at the end of This Night I Will Possess Your Corpse, the original ending that is, are looking for him to get their righteous revenge. Joe and his minions manage to find several women as candidates for Joe’s unholy conception and along the way, torment and mutilate everyone who stands in their way.

Allegedly this is the last of the Coffin Joe movies. Marins is old, after all, and the last entry in the series, the official entry, that is, was in 1967, so timely this is not. Each movie in the series was supposed to be the last one with Coffin Joe meeting his demise but he always managed to come back for more. Yet, in spite of its ambiguous ending, Embodiment Of Evil sends Coffin Joe out on a high note,  if this is to be the end. Marins put on the cape and hat, originally, because he felt that none of the actors he brought in to play the part could really pull it off without camp. He had a definite vision in mind for Coffin Joe and it took him no time at all to make the character his own. Because of that and in spite of years of absence, Marins slips into the role with the greatest of ease and winds up ranting and raving just like he did in the 60’s.

There will no doubt be some discussion about the degree of violence on display in Embodiment of Evil. Many will argue that the movies of the 60’s were never about the violence and that Coffin Joe’s appeal was all about the unmatched atmosphere in those movies, and while the violence of Embodiment of Evil is even acting on a level above Hollywood gore, the Coffin Joes of the past were staggeringly gory for their time. So it’s only natural for a modern Coffin Joe movie to set a nastier pace, and nasty is on the menu. Marins is playing for keeps with what will most likely be the last appearance for Coffin Joe and they go all out. We’ve got Joe flaying women, men suspended through hooks in the flesh of their backs, auto-cannibalism, necrophilia, scalping and a sex scene that puts the bloody shenanigans of Angelheart to shame. Marins makes use of Rio’s native body mod community as the actor hung from hooks is not a special effect, this is an actual suspension as is the scene where the man sews the lips shut on a woman, hence the latex gloves which shouldn’t be necessary in Hell. The gore is off the charts, people, and it looks really good. Coffin Joe, even at the height of his popularity, was bankrolling movies on pocket change but this time around we get some solid horror special effects.

On the downside, Coffin Joe movies have a tendency to repeat their themes and Embodiment of Evil is no different. This is just an update of the mythology, you’ve seen this Coffin Joe movie if you’ve seen either of the others. This time, however, nothing is censored. You get all the gore and blasphemy but at a cost. The unfortunate side effect is that Joe’s simple quest to find a woman to carry his son is drawn out over ninety gruelling minutes that seem to be little more than a vehicle for Joe and cronies to carve people up and it seems to be much longer than it needs to be.

The end result is atmospheric and gruesome. Joe is back with a bang and after such a long absence, it only goes to show that Coffin Joe is the character that Jose Mojica Marins was put on this earth to play. He’s still, even in his old age, extremely intimidating and the movie tosses in many elements from past Coffin Joe movies, such as the ghosts of dead (presented in black and white) coming back to haunt Joe. It’s difficult to figure out who to root for, as well. Joe and his posse are so flagrantly evil but the police and criminals of the favela have nothing to redeem them. They seem like the sort of corrupt assholes who deserve to be decapitated and dismembered. But how do you cheer for a guy who cuts the skin at the back of a woman’s head so that he can peel her scalp up over her skull?  Even at ninety minutes, it feels a little long but the creativity of the gore is enough to turn this movie into a tour of degradation. If this is to be Marins’ swansong, this was a hell of a way to retire.