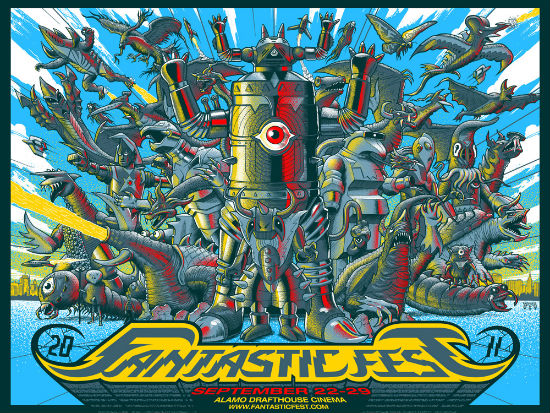 The Fantasia Film Festival kicks off today with the Canadian premiere of Kevin Smith’s Red State, and now we’re already looking ahead at another major film fest. Fantastic Fest is one of the best film festivals in the states. Held in Austin Texas at the Alamo Drafthouse, the event screens nothing but the best in genre films. Sound On Sight contributors Emmett Duff and Alice Gray are always in attendance to bring us coverage on the event, as well as their favourite films. The list of the first wave of films playing at the festival has been announced and it’s already pretty amazing. Leading the pack is the World Premiere of director Ferdinando Baldi’s Comin’ At Ya! 3D. There are also a few films that already come highly recommended from me, which include the Canadian sci-fi dystopian mind fuck Beyond The Black Rainbow, Julian Gilbey’s A Lonely Place To Die, and the strangest film you will see this year, Underwater Love. Check out the full line-up below.

Comin’ At Ya! 3D “30th Anniversary” (2011)- Real D Presents
World Premiere
Star Tony Anthony and Producer Tom Stern live in person
Director: Ferdinando Baldi, USA, 118 minutes
The film that kicked off the ’80s 3D Boom returns in a state of the art digital re-imaged restoration. Equal parts western and rollercoaster, COMIN’ AT YA pulls out every stop to entertain you.  If the modern wave of 3D were as fun as COMIN’ AT YA! 3D, the motion picture industry would have nothing to worry about.  The only Spaghetti Western shot in 3D is now completely restored with the latest in 3D technology and stars Tony Anthony as H.H. Hart, an avenging hero out to retrieve his kidnapped bride, played by Victoria Abril. Gene Quintana plays the slave trader who is holding her hostage in this extremely memorable cult favorite.

Takaomi Ogata’s BODY TEMPERATURE chronicle’s a young man’s love affair with a life-sized sex doll.  Think LARS AND THE REAL GIRL but with all the creepiness that story was strangely missing.

When David finds a bag in the park, he sees its nefarious contents as the perfect escape from his dead-end life; hopefully without losing it entirely at the hands of the bag’s former owner.

Based on a manga (surprise), BOYS ON THE RUN’s central courtship starts with a bestiality DVD and ends with a Taxi Driver-style showdown. Guaranteed to warm the heart of the serial masturbator inside all of us.

Testicular trauma, the underground beef hormone black market, steroid addiction and a vast swath of suppressed emotions swirl together to form one of the most powerful narratives we have seen in recent memory.

Luis Estrada’s El Infierno (Hell) finds pitch-black dark humor in a peasants rise to power amid the drug-war-torn streets of the Mexican border.

The no-budget bikini-clad alien invasion martial arts romp INVASION OF ALIEN BIKINI was so fun, it took the $25,000 jury prize at this year’s Yubari Fantastic Fest, a sum more than five times the budget of the film.

From the producers of MAN BITES DOG, KILL ME PLEASE details the day-to-day exploits of one of the world’s foremost assisted suicide clinics. Dark comedy and pathos are as well mixed as Dr. Krueger’s lethal cocktails.

This back-to-basics, no-BS modern take on the survival genre features a violent Russian girl in a cage, gun-toting maniacs, and a cat-and-mouse chase across lawless, rural Scotland.

This bizarro musical/variety/samurai/love story from Japan is cinematic LSD from Yoshimasa Ishibashi, the mad genius behind the Fuccon Family, and Takayuki Yamada, who plays all three male leads.

Gutter comedy escalates to ludicrous extremes in the Dutch smash hit that will leave you gasping for air. The mullets are magnificent, as are the moustaches.

Ching-Po Wong’s REVENGE: A LOVE STORY follows a severely wronged man in his quest to avenge  a terrible crime.  This is a new ultra-violent Hong Kong action, one deeply influenced by the best of Korean revenge films.

Justin Kurzel, part of the Australian Film Collective BLUE TONGUE FILMS whose members include Spencer Susser (HESHER) and NASH Edgerton (THE SQUARE), knocks out a stellar debut feature with SNOWTOWN, a dark hypnotic tale of a lower-class youngster who has the misfortune of finding a father figure in John Bunting, Australia’s most notorious serial killer.

The simple life of a fish factory worker gets turned upside-down when she falls in love with a legendary Japanese creature in this kinky, musical romp of a pink film lensed by the legendary Christopher Doyle and directed by Fantastic Fest veteran Shinji Imaoka (UNCLE’S PARADISE).

The 10th anniversary screening of the yakuza vs. zombies action classic that cracked open Japan’s indie film business like a can of cheap beer.

Ten years after starring in VERSUS, former street fighter-turned actor/director Tak Sakaguchi is back with this mondo trasho flick about a yakuza with a machine gun arm and a rocket launcher leg.

Lucio Fulci’s extreme masterpiece of post-Romero corpse mania is back in a gorgeous 2K digital restoration.

If you want more information on how to attend Fantastic Fest, head to the official site: www.fantasticfest.com