Sensual, nude and with a great love for its characters! Beryl Koltz‘s feature debut in English language from Luxemburg offers an unusual set of characters, an eye for detail and a sharp sense of humor in a world bordering on the surrealism our reality sometimes has to offer. Ferdinand Fairfax (Rob Stanley), a slightly awkward and shy employee at Fish Land is living in his self-contained nutshell of a life. After being transferred to the Finish Turkish Delight all comfortable silence and isolation of his routines are turned upside down.

The spa presents a world that is as much scarring as it is daring to slightly disconnected Ferdinand. And so the journey begins, the fish enters the sauna and sees himself confronted with his panpipes 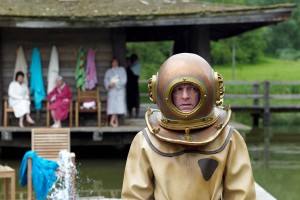 loving and controlling narcissist of a boss Knut (Gary Cady); want-to-be-Lady-Gaga colleague Isadora (Amber Doyle), who likes to snap photos of the naked clients in the shower; kind hearted Mary-Ann (Joanna Scanlan); and Ling (Wendy Kweh), the blind masseuse that initially opens Ferdinand’s eyes to what life can offer. These multifaceted lead characters are then well rounded off with a set of side characters far from the dominant perception of beauty of mainstream cinema. The visual symmetry of the setting is juxtaposed with perfectly ordinary bodies that come in all sizes and shapes. 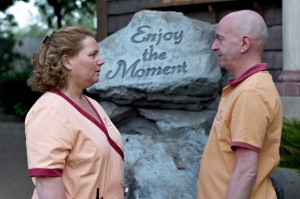 What makes Beryl Koltz‘s debut so brilliant is that she has the guts to display a set of characters far from standard perceptions of beauty. She fully commits to a creative vision, while not taking herself too seriously. Of course that sometimes leads to somewhat “deliberate“ visual composition, but that is outbalanced with that almost touchable love Koltz has for her strange characters. Under the covers of comedic absurdity lies a layer of serious critique and while neither title nor trailer do justice to the cosmos created – Ferdinand is one of the most unexpected lovable characters one has seen on screen lately .

This is not the traditional story of the ugly duckling, this is pure blue soda sipping, absurd fun. This is a story of a captive man who realizes how he can open up to the estranged world surrounding him without losing his own uniqueness. Koltz‘s world of “Hot Hot Hot“ hosts a series of surprising elements offering a refreshing new, maybe sometimes over-constructed yet always refined view of world‘s apart!