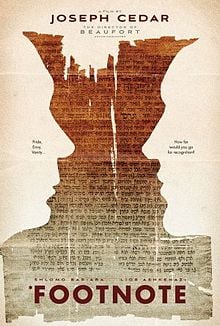 Footnote is unusual in that it does a number of things well; more to the point, it does a number of things seamlessly. It tells a quintessentially Jewish story in a way that is not just accessible, but relevant, to a non-Jewish audience. It inhabits the claustrophobic world of academia and cracks it open with great wit and great insight. Most importantly, it splits one of the most archetypal character relationships, that of a father and son, into fierce rivalry and difficult love. How can all these things be dismantled and recombined, intelligently and elegantly, in one film? Footnote is the best film to come out of Israel in decades.

The Best Screenplay Award at this year’s Cannes was awarded to Footnote, and the accolade was certainly well-deserved. The story—of Elizer and Uriel Shkolnik (Shlomo Bar Aba and Lior Ashkenazi), father and son, both professors in Talmudic studies at the Hebrew University in Jerusalem—is not only like something out of literature, but is told in a literary fashion. Director Joseph Cedar punctuates the film with chapter headings (that are far more clever than they appear) and makes liberal use of titles-over and text in his scenes and montages. Wordplay is made essential, and the dialogue is sharp enough to be revealing but not snappy enough to be overwritten. However, Cedar does not neglect the medium. The film’s opening scene, wherein young Uriel accepts a prestigious award never granted to the elder Elizer, is already tense as written; by choosing to keep the camera on Elizer for the entirety of Uriel’s speech, Cedar renders the scene incendiary. The camera is used wittily, too: some of the film’s biggest laughs are responses to visual gags, like Elizer framed by the window of a moving car after refusing a ride, or a tense meeting in an overcrowded room deflated by everyone standing to make room for one more chair.

The effect of all this point and counterpoint is certainly complex, but the film concludes as elegantly as Hebrew will allow; that is, with a well-made point that still provokes a debate as the credits roll. Footnote is something of a cinematic companion to Saul Bellow, Allegra Goodman, or Philip Roth. If that seems like lofty praise, know that Footnote earned it.