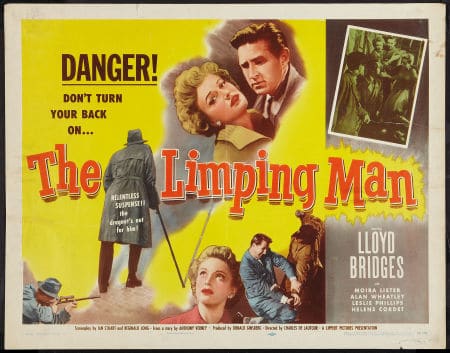 After diligently serving his country during World War II, American Frank Prior (Lloyd Bridges) takes a plane back to England to reacquaint himself with actress Pauline French (Moira Lister) whom met during the war while stationed in London. Upon leaving the plane at the airstrip, a gentleman, Kendal Brown, asks for a smoke, but before Frank can oblige, the man is shot from afar and drops dead! Naturally, the police investigation, led by Inspector Braddock (Alan Wheatly) and Detective Cameron (Leslie Phillips), is very interested in knowing every bit of information Frank can provide to elucidate mystery. Just before being given leave, the ex-pat says he can be reached at his girlfriend’s London address. In a shocking twist, shortly after departing the police discover a photograph on the victim’s body- that of Pauline French!

While film noir is regularly and justifiably regarded as an American film movement, the truth of the matter is that filmmakers in several different countries over the course of several decades also flexed their artistic muscles in the land of doom and paranoia drenched in inky black and white photography. Other times a non-United States setting is sufficient to freshen things up and provide a different spin on the proceedings. The case of The Limping Man is of interest insofar as only a few of its most important voices are American, such as director Cy Endfield and star Lloyd Bridges, whereas most of the rest of the cast and crew are British, to say nothing of the fact that the story itself is set in London. Viewed as such, the movie is therefore a coming together of two voices that could very capably dabble in noir, providing fans with many of the movement’s most cherished outings. 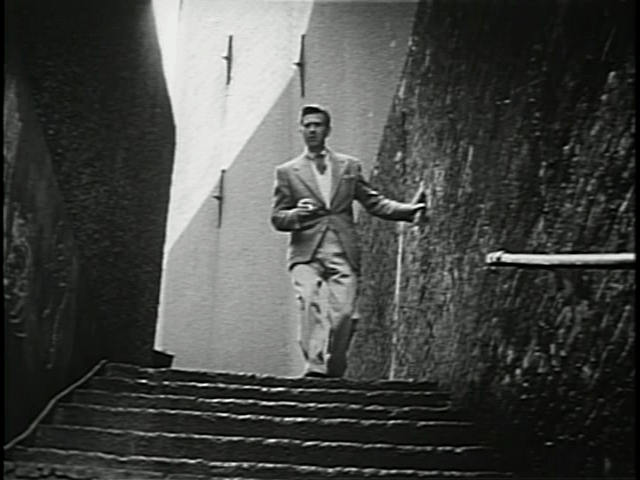 While The Limping Man itself does not rise to the top of the ranks, it is nevertheless a compelling exercise in dread and oppression, fluidly building a sense of mounting pressure onto the two protagonists, Frank and Pauline, as they slowly see their chances at happiness together fade away. The brunt of the drama explored in the film bears down on Frank, seeing as he is the character standing on the outside, trying to look into the mystery surrounding the death of Kendal Brown and connect the dots in the hopes of shielding Pauline from any danger she may be in. As he comes to learn that his girlfriend was, directly or indirectly, involved in the demise of his fellow plane traveller, Frank cannot help himself but get involved in the investigation despite warnings from Inspector Braddock to let the authorities handle the matter. It should be understood that Frank has left his home country to be with the woman he loves, ready and willing to set himself up in England to spend the rest of his life with her. With the revelation that Pauline had some link to the deceased, he no longer has the option of packing his bags and returning stateside; he must help Pauline, even if it lands him in hot water, which, this being a noir, it inevitably does.

Pauline is not relegated to playing second fiddle though. Her situation is different, but runs a similar gamut of emotions as Frank’s. She is initially overjoyed abut having Frank come live with her, as they are very much in love, but the current police investigation puts a heap of pressure on her ability to hide the truth from her lover. Thus, both people are desperate for peace and tranquility, but the threat of danger is hunting them down. The fashion by which the film creates an imbalance is in not divulging the full spectrum of Pauline’s troubles in the early goings, saving them for later in preparation for the third act. As a tactic to build late suspense, it ultimately pays dividends, yet it does make Pauline feel, at least in the first half, somewhat less important than Frank by the very fact that neither Frank or the viewer can be privy to all her innermost thoughts just yet. The Limping Man’s final third restores an equilibrium with respect to the importance of both roles, although it is safe to argue that the first half feels more like Frank’s picture than it does that of two people. 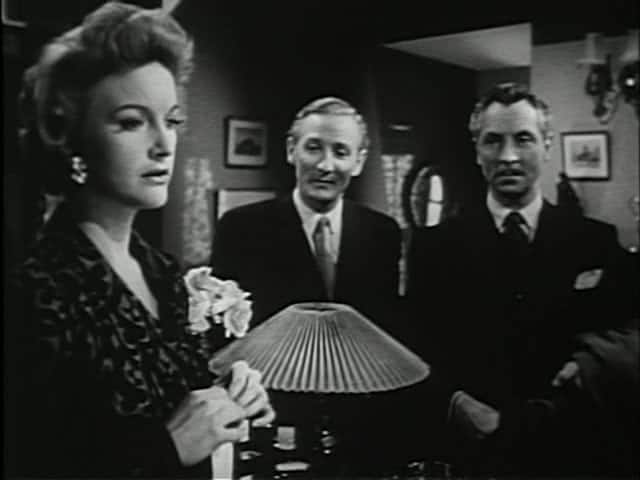 This is not a major criticism, but merely an observation that in order to preserve a sense of mystery, the picture’s female lead must be kept at bay to a certain extent from the audience. In no shape or form does it significantly diminishe the quality of the first half, save for the fact that the viewer does not get to enjoy actress Moira Lister as much in the early goings as they do Lloyd Bridges. Director Cy Endfield smoothly builds a claustrophobic aura of Frank’s walls caving in on him. The more he tries to pry information out of Pauline, the more she shuns him. London is a gigantic city, yet ironically feels as though Frank is boxed in a predicament from which there may be no way out, except by abandoning Pauline. Endfield proves adept at tingling the audience with paranoia, as more than once people he and Pauline cross, usually acquaintances of the latter, do not appear to be speaking the complete truth to his face. There is a cover-up of some sort happening, but just how many people are involved?

In one of the film’s stranger yet most poignant scenes, Frank and Pauline walk near the London docks and share a drink at a tavern at the insistence of its owner, whom Pauline apparently knows already. Nearly everything about the circumstances suggests that something is amiss, increasing Frank’s unease about whatever he suspects Pauline to be involved in. As he goes outside to wait for Pauline, who was asked to speak to yet another mysterious individual, a man walks out of the tavern. Frank calls out to him, yet the individual does not turn back, continuing his walk towards a flight of stairs that head downwards towards the water. When Frank reaches the top of the flight and looks down, no one is there. Where did this man venture off to? Who was he? The viewer is left in the dark as much as Frank is in a brilliant bit of direction on Endfield’s part to inject the sort of unease that permeates the screens so much that it inexorably overflows onto the audience.

As is so often the case, the answers to the questions being asked since the start do not fulfill all expectations, but The Limping Man does manage to sustain enough of its dour aura until the finish. What the film accomplishes above all else is conveying a sense of dread. London, one of the world’s top tourist destinations, suddenly looks and feels like the least inviting place imaginable. This is the post-WWII London, a city that saw destruction first hand via Nazi bombings. It is a city that, while in many ways emboldened by the brazen German attacks, also grew a bit nastier. Scoundrels hurry about, planning nefarious acts behind the backs of unsuspecting, nobler people fit to prey on. A lot of credit deservedly goes towards director Cy Enfield and his crew for successfully giving the skin crawling tone a vessel in London. London Bridge may not be falling down in this case, but Frank and Pauline’s chances of living a happy life are, and rapidly at that.