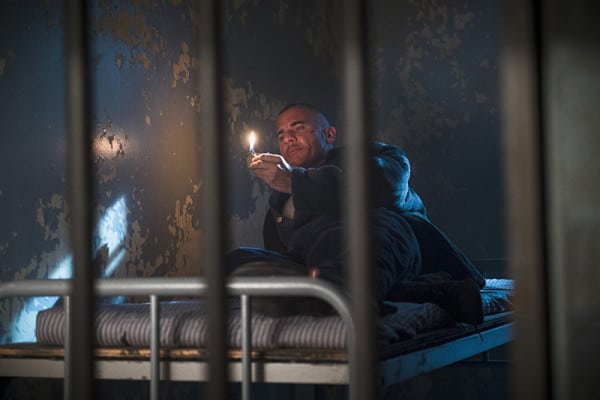 Legends of Tomorrow finally plays to its strengths in a high-stakes episode with a darker tone. In a refreshing change of pace after last week’s interminable episode, Things Happen. Stein, Ray, and Mick are being held captive by Vostok in a Soviet gulag, while the team races to rescue them.

One of the aspects of the series that is becoming clear over time is that, by and large, this is a series better suited for grimness than levity. It is possible to write a show full of hard-edged characters that is on the lighter end of the spectrum – Firefly did it brilliantly in the first half of its season (after which it got progressively darker) – but it is very difficult. Edgy characters pair best with edgy, high-stakes plot. The Flash, the buoyant younger sibling of the CW Arrowverse shows, maintains its lighter tone in large part because its characters are overwhelmingly “good” people – moral, kind, “normal” to an extent.

And while Legends of Tomorrow will never be as consistently dark as older brother Arrow has been over the course of its run, the fact remains that half of the Legends team consists of troubled, morally ambiguous, violence-prone survivors – and the show shines when it puts these characters in situations that test them, against villains that feel like a match for them.

Legends‘ strongest players are Caity Lotz and Wentworth Miller, along with Victor Garber. The former two simply have the strongest presences on the show, and, assisted by consistent character writing and development, easily dominate the screen. Victor Garber’s Stein is an effective counterbalance to them on the side of the more morally upright, and it’s no accident that the episodes are always built to capitalize on the veteran actor’s considerable talents. Garber, although clearly playing a “good” man, shines when given meatier emotions and choices to portray.

See also  Inside Out 2012: ‘She Monkeys’ straddles the precarious equilibrium of genius and insanity

This episode succeeds because it places its strongest characters in situations that draw on and challenge their strengths – Sara and Leonard paired as a team for the prison break, and Stein imprisoned, falling back on his strong moral will to resist psychological torture. Sara takes the clear lead on a mission for the first time, a role that feels very natural for her character, while dealing with a moral dilemma that leaves her torn between her assassin’s instincts  and her truer self. Leonard offers a fair measure of unsolicited advice on this dilemma, and it’s refreshing that it’s the criminal who draws a line at murder. (As an aside, I remain faintly baffled the show hasn’t given these two a romance – the chemistry between the actors is very evident, and stronger than any other pairing on the show.)

Ray and Mick, two perennially under-developed characters, similarly face challenges while in prison that illuminate new dimensions. In the only scene all season where Ray actually has a personality, he shoots off his mouth to a guard, focusing a vicious beating on himself and away from Mick. This leads to a fairly adorable scene in which Mick, after struggling with his conscience, risks his getaway and his life to carry the unconscious Ray out of the gulag.

This scene also allows a fascinating look at the psychology of both Mick and Leonard, and what drives them – both have a rock-solid commitment to each other, yet their loyalty to the other team members waxes and wanes and appears to play favorites. Leonard balks at the notion of Sara killing Stein – yet unblinkingly plans to leave Ray in the gulag. Mick meanwhile clearly has no concern at all for Stein, but refuses to leave Ray behind. The two both have a vague concept of loyalty to the team as a whole – hence their continued presence on the ship – but are much more likely to go out of their way to protect those they’ve actually bonded with.

Caspar Crump’s Vandal Savage continues to be a charisma-killing black hole – every time the camera focuses on him, it’s as though we’ve jumped ship (pun intended) to an entirely different show where camp doth reign. But for once he’s featured relatively little in a tense episode with a lot of momentum, and it is satisfying watching Rip blow him to smithereens, however temporarily, while walking away. Franz Drameh delivers a very strong performance this episode as Jax, and even shares a genuinely touching scene with Stein – there’s hope for these two as an interesting pairing yet!

The episode ends, as the last one did, on an excellent cliffhanger – the team crash lands in an unknown place that turns out to be Star City 2046 – a grim, post-apocalyptic-esque landscape in which a masked, bow-and-arrow-carrying figure quickly appears and threatens them. Sara and Ray eagerly greet the Arrow – but this isn’t the Arrow they know. Instead it’s the Green Arrow of the future, Oliver’s successor and mentee in at least one version of the future, played by Joseph David-Jones as Connor Hawke. The scene is rife with implication and possibility for comic book fans and Legends/Arrow fans alike, and marks a very strong end to a suspenseful episode.

I feel that the show is gearing up – at iceberg pace – for a Sara/Rip romance. The show could really use some romance, since in any given episode the emotional stakes aren’t high enough.

“We need to break into that prison – and can you make it fast, I despise the heat” – Captain Cold
“Barry Allen who?” – Jax
“More drinking, less feeling.” – Heat Wave