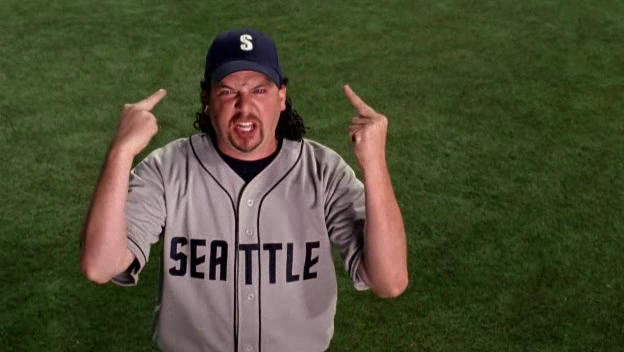 Eastbound and Down Season 1, Episode 1 ‘Chapter 1’

Let’s talk about the game of baseball for a bit – and more importantly, the physical construction and parameters of the game. First of all, there’s the field: a diamond with four points, each separated by ninety feet for a total of 360: the amount of degrees in a circle. Now, let’s look at the baseball: unravel its skin, and you’ll notice the pattern of the stitches make the infinity symbol around the white leather that makes up its shell. Metaphorically speaking, the baseball is our soul, something we try to find (with a swing) or protect (with a pitch) as we run away from home base (literally, home) and towards first, embarking on the adventure to find ourselves – with the ultimate goal of returning to the place it all began, to begin the journey anew the next time around the order.

It’s like a dream, isn’t it? Every time you step to the plate or onto the rubber, it’s an opportunity to define yourself, to display your one true swing (shout out to Legend of Bagger Vance) and fulfill your destiny. You want to embark on this journey so badly you can taste it in your mouth, sweating in the summer sun and trying to find that one moment where potential and kinetic energy meet, that instant where everything in life falls into place for you to chase your wildest dreams around the bases. Baseball is called “the perfect game” for a very simple reason: it’s the game of life, the one we always fantasized about as a kid.

Another interesting component to the philosophical foundations of baseball is the absence of time: a baseball game isn’t played until two teams of nine players complete nine full innings (of three outs apiece). There are no time limits (if a game isn’t completed and it gets too late, the game is picked back up at a later time), no arbitrary way of ending the game (except if the home team scores more runs in eight innings than the road team in nine: it is a fair and just game, after all) before it reaches its natural conclusion. In the end, the goal is the same: you want to make it around the bases to reach home plate, the same place that white ball reaches hundreds of times in the game.

In the end, there’s only one rule – if you can keep hitting or mowing down hitters, the dream won’t end. Your cyclical adventures around the bases continue, and as long as they do, you never have to face the realities awaiting all of us at the end of our most lavish romances (save for the occasional heartbreaking loss – but hey, every love hurts sometimes). It’s all good and well; but when we age and finally have to face Father Time, we leave the one place we can try and ignore his ever-looming presence: the baseball field, the one place where time doesn’t exist at all (Field of Dreams making a little more sense?). But that moment will come when you stop hitting – and when it does, what you are left with is your friends, your family, and your community: your home, returning to the people (and often, the place) where your journey began.

When Kenny Powers was 19, he stepped up to the plate of life – and in his words, “changed the face of baseball.” He was as superstar, a reliever whose catchphrase (“You’re fucking out!”) and arrogance could only hope to meet the heat of his fastball. It was his gift from the heavens, an arm blessed by the gods: but Kenny didn’t treat it as such, and as his fastball lost velocity, his career spun out of control. He made anti-Semitic comments in New York and anti-gay ones in San Fransisco that lead to a swift exit; steroid allegations turned his time in Boston into a nightmare, leaving him to play out the sad end of his career for the lowly Seattle Mariners, the last pitch he ever threw a meatball that was hit a hundred feet over the fence of the game’s new superstar, symbolizing that Kenny’s soul – for the time being – is now lost.

The pilot cuts immediately there to a shot of Kenny sitting at a desk, with the phrase “Several Shitty Years Later” quickly narrating the events of the time in between then and now. He’s at Jefferson Davis High, the place where Kenny’s career began as a hotshot starter banging the girl with the biggest boobs in high school. Except that was twenty years ago, and now his old flame April is engaged to the principal Terrence Cutler, whose “athletic achievements” make Kenny sneer. Turns out you can’t just go back and pick up where you left off 20 years ago, because people change: his brother Dustin is married with three kids, and April wants nothing to do with Kenny, despite the magical history Kenny tries to draw from their reunion. 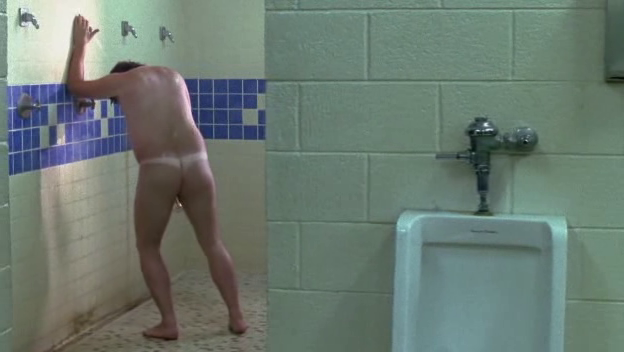 Eastbound and Down‘s world in the first season is very different than that of seasons two and three, and not just in setting: these are the darkest chapters of Kenny’s life, the first time he had to look in the mirror and face the facts: he’s a big ol’ fucking has been, not even famous enough to get a prostitute to deliver a house call or a group of kids to remember him as anything but the guy “who ruined baseball”: it details the very thing no sports fan or pundit ever wants to discuss, and it’s painful as hell to watch. All we remember is the glory: we don’t stick around for the inevitable downfall, which for those that aren’t revered as legends can be a very painful journey backwards in time.

For a comedy pilot, ‘Chapter 1’ is a lot lighter on plot and character than the first eight hundred words here might suggest: there’s barely any time spent with the other people re-entering Kenny’s life, the attention squarely focused on the depressed, frustrated Kenny Powers. If Danny McBride wasn’t so damn funny in the pilot with his improvisation, it would be the most fucking depressing half hour of television ever produced: in one scene, Kenny’s trying to cry quietly in the basement of his brother’s house so nobody else has to hear how devastated he is that he had to finally wake up from his dream, and it’s one of the most heartbreaking, hilariously awkward things you’ll ever see.

But everyone has to wake up at some point – and that’s what makes Kenny such a relatable character despite being a massive, ignorant (and racist) asshole 99.95% of the time. We’ve all been where Kenny was, whether if it was when we were eight, when we realized being awesome at Operation didn’t mean you’d be a good doctor; or at thirty, when we got fired from the job we thought we’d have forever. Life has a way of kicking you straight in the ass – and when you lose yourself, both Eastbound and Down – and the game of baseball – suggest that the best way to find yourself is by going home, to be around the people who know who you really are, and love you in spite of it.

Although its brash humor and seemingly unlikable protagonist suggest otherwise, Eastbound and Down is about the most romantic aspects of baseball, a sport where men fight for the ultimate right to go home. In my humble opinion, the show slowly lost that idea as it became more popular – but hot damn, ‘Chapter 1’ is a beautiful piece of tragic comedy.

– for more in-depth thoughts about the symbolism of baseball, a few bits of literature to check out: Robert Coover (who wrote about the symbols of the baseball as infinity and the soul), Robert Kelly’s essay ‘A Pastoral Dialogue on the Game of the Quadrature’, and anything you might be able to find on the web from Stephen D. Mosher, a former professor of mine and the single smartest person I’ve ever met in my life.

– “I was handed the keys to the kingdom… but sometimes when you bring the thunder, you get lost in the storm.”

– Kenny to his brother’s wife: “You named your kid after the Titanic? You gotta be fucking kidding me… what’s this one’s name, Shrek?”

– Kenny Power’s audio book was titled “You’re Fucking Out, I’m Fucking In,” and plays quite frequently as narration throughout the first season.

– Stevie is barely a character on this episode, but would become one of the funniest and annoying presences on this show.

– when Kenny realizes the kids think rehab is where you go after surgery, Kenny says: “Yeah, I went to rehab; I hurt my nose.”

– the double entendre Kenny drops on Terrence is hilarious; when Terrence asks if he wants a smoothie, Kenny’s deadpan response is “No, I’m straight.”

– Clegg to Tracy: “What you need is a shit ton of Valtrex.” 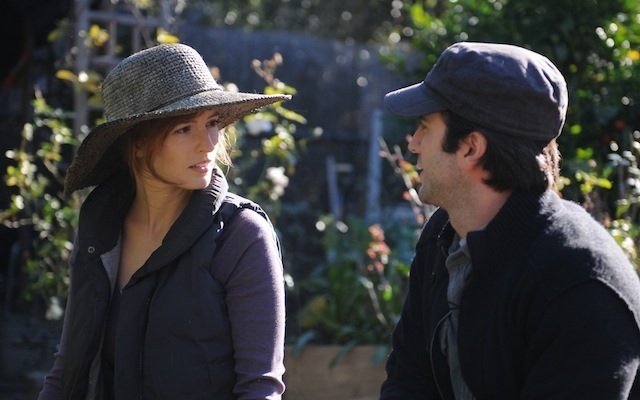 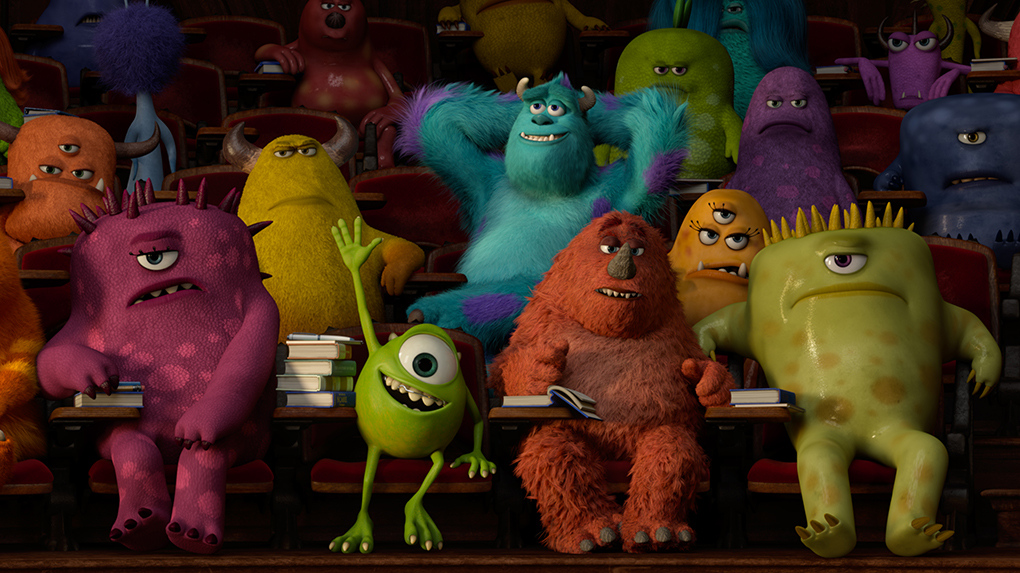