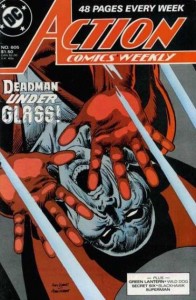 Warner Brothers has announced that Pan’s Labyrinth director Guillermo del Toro, in association with Angry Films productions, is set to produce a film adaptation of DC Comic character Deadman. The project in development has set Danish filmmaker Nikolaj Arcel to direct. An official press release has yet to have been confirmed, but according to IMDB, the film is set for a 2010 release.

The film follows a murdered circus tightrope walker who comes back as an entity and has the ability to inhabit other people’s bodies to help him find his killer. This will be DC’s third comic book adaptation since Watchmen, alongside 2010’s Jonah Hex, starring Megan Fox, and 2011’s The Green Lantern.