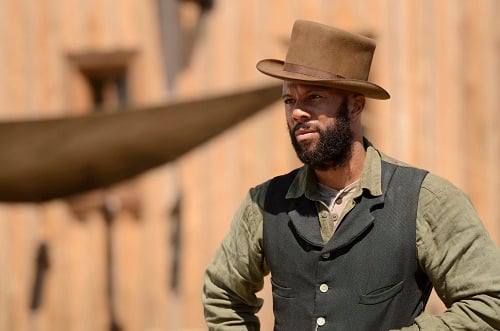 With only two episodes left, Hell on Wheels is closing on what’s been a pretty epic season. Durant (Colm Meany) returns to the camp with his wife Hannah (Virginia Madsen) right behind him. Elam (Common) builds his house by the river while Eva (Robin McLeavy) and Mr. Toole discuss her child with Elam and Lily (Dominique McElligott), Cullen (Anson Mount), and the Durants have a wonderfully awkward dinner where Hannah makes it perfectly clear that she knows Lily’s past with her husband and isn’t happy about it at all.

“Careful who you align yourself with, Mr. Bohannon,” Hannah tells Cullen early in the episode. This late in the season it’s always a risk for a show to introduce someone new, but Hannah’s an intriguing character that I hope they carry into the next season. Her reaction to Lily and handling of Lily and Durant’s relationship is brilliant and wonderfully acted by the always great Madsen. 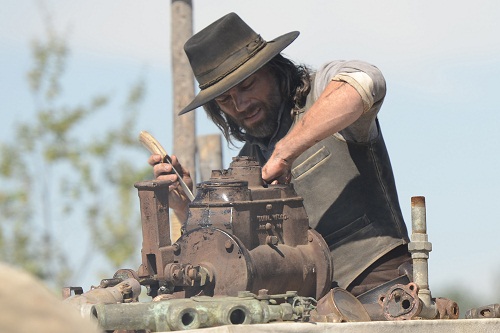 “The Lord’s Day” belongs to Common. Even though his character’s been pushed into the background for the last couple episodes, Elam’s anger is still apparent and he’s starting to put it to good use. He wants things, a home and a life with Eva, and he’s starting to figure out just how to get it.

Things are starting to fall into place for the rest of Hell on Wheels and its characters as well. All season the show has been building towards an explosive conclusion. The image of Cullen burning The Swede’s tent to the ground and Elam’s confession to Cullen that Durant wants him to take a job with the railroad is simply a promise of what’s to come. What Elam’s new job is, and what it means for Cullen, could do a lot to shake up the dynamic that Hell on Wheels has created for its characters.

“The Lord’s Day” is a wonderfully moody introduction into next week’s two hour season finale. While it has some truly great moments, with the introduction of Hannah and Lily being put in her place, it’s almost exclusively set up for next week. It looks great and there are some intriguing shots (the first scene as Cullen and Mr. Toole fix the rigging device is particularly well done, as is the bridge scene). But more than anything “The Lord’s Day”, simply exists to get viewers excited for what promises to be an exciting two-part finale next week.