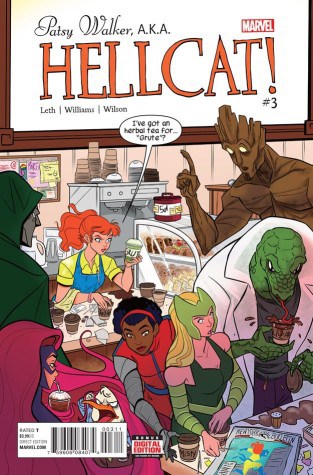 Patsy Walker is a character, who has had a long and insane history starting as the heroine of a series of romance comics in the 1940s to becoming the superhero Hellcat and a part of the Defenders and the Avengers. Along the way, she has died, resurrected, and was even married to Daimon Hellstrom, the Son of Satan so she definitely has a connection to the mystic and magical side of the Marvel Universe. So far, Patsy Walker AKA Hellcat has only looked at this side of her through her ability to sense things, but writer Kate Leth, artist Brittney Williams, and colorist Brittney Williams bring it to the forefront in Hellcat #3 as there is something not quite right with her and Ian Soo’s landlord, Mr. Ravina and his hunky son, Frederigo. And along the way, they weave in the real life problems of finding good housing and conflicts with tenants and landlords, but with a magical twist and a fun cameo from Doctor Strange and Wong. Patsy’s chat with them isn’t forced, and Leth shows that they have a friendship from her stint with the Defenders without referencing old, obscure comics.

Once again, Megan Wilson’s colors shine in Hellcat #3 as she embraces the deep purples and blues of Patsy’s mystical abilities with flashes of yellow from her costume and the trim of Doctor Strange’s cape. (Like with George Perez’s work on Hellcat, Williams embraces the classic Steve Ditko Doctor Strange costume while using upbeat modern storytelling techniques inspired by animation and manga.) Wilson explores the darker end of pastel, which makes sense because most of this plot happens at night with Patsy visiting Doctor Strange at 2 AM and sneaks around her apartment complex looking for the reason behind the bed bug infestation and high tenant turnover.  Leth lets her demonstrate her detective skills without making a big deal about it in a perfect example of showing, not telling. This philosophy also extends to the romance hinted at in the issue as Tubbs and Patsy simultaneously fall for the handsome Frederigo Ravina, who is trying his hardest to smooth things over. Williams isn’t afraid to visually portray their head over heels love with wide eyes, hearts, and plenty of pink from Wilson, and it has all the warmth of a Carly Rae Jepsen single.  And she can do action and horror too, stopping mid-page for a disgusting transformation sequence as sexy Frederigo is covered in bugs before Patsy almost kicks him off the page. (Her goal is to help these kind of down on their luck, forced to do bad things people, but she always ends up kicking their butts first.) 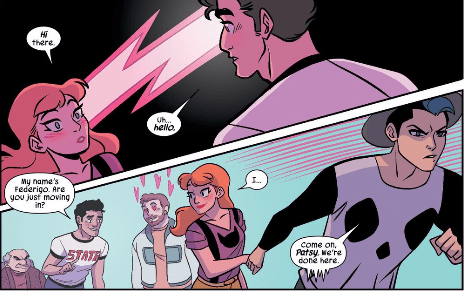 In overall plotting , Hellcat #3 seamlessly serial genre storytelling (Think X-Files and Buffy back in the day, and The Flash and Supergirl) with threats of the week leading up to a Big Bad at the end of a season/arc with a strong thematic throughline of Patsy helping reform would-be villains and helping superheroes find work. (Even if she doesn’t have an official temp agency yet.) And Patsy has to face off against the more traditional supervillain Casiolena as well as the exploiter of her childhood experiences, Hedy Wolfe, showing that this book has one foot in the fantastic and the other in the more realistic sides of the Marvel Universe. Leth also keeps each issue fresh with new “real life” situations. Last issue, it was the general suckage of working retail, and this week, it’s dealing with the landlord, who has some really evil eyebrows. And unlike last issue, Patsy gets a win with a magical assist from Doctor Strange, which sets up a possible sorcerer’s apprentice subplot and ends up helping Frederigo come to terms with his powers. (But she won’t date him because his powers are gross, and I don’t blame her. Maybe she can set him up with All-New Wasp.)

After Hellcat #3, it’s safe to say that I’m a (Hell)kitten, and this comic is my warm milk (I would have said catnip, but that’s even self-indulgent by my standards.) thanks to its varied colors from Megan Wilson, adorable art and zippy storytelling from Brittney Williams, and a thematically robust, joke filled writing. Watch out for a great Jessica Jones Easter Egg too!