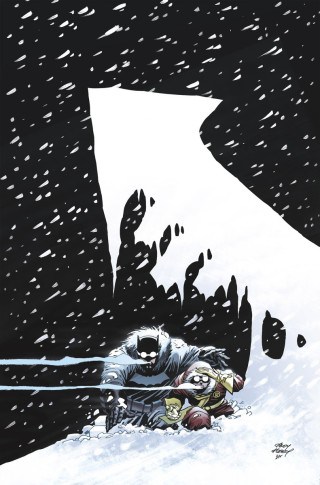 Even though the lion’s share of the work is done by his collaborators co-writer Brian Azzarello, artists Andy Kubert and Klaus Janson, and colorist Brad Anderson, The Dark Knight III: The Master Race #3 is a study into what has Frank Miller’s work so innovative and also (in his later years) so regressive. In The Dark Knight III #3, Bruce Wayne gets involved in the plot as he watches Quar, the leader of Kryptonians trapped in the Bottle City of Kandor, give Earth a three day ultimatum to worship them or be destroyed. With the UN and world’s leaders ineffective, Bruce Wayne and Carrie Kelly aka Batman shoulder the burden of defending the planet themselves and recruit Superman to fight against the Kandorians. Strangely missing from this issue is Wonder Woman, who made a couple substantial appearances in the previous two issues trying to dissuade Lara from joining this violent cult of Kryptonians. Perhaps it’s because she is too committed to the idea of working together as a collective to create a peaceful community as Batman’s rugged individualism is literally beamed across the world as this comic’s ideological lynchpin. And Carrie and Superman are just game pieces used by the frail, aging Bruce Wayne to intimidate both the Kryptonians and ineffective world leaders, who are totally fine negotiating with terrorists.

But before I go into the politics of Miller and Azzarello’s story, Andy Kubert and Klaus Janson continue to excel at the visual storytelling aspects of The Dark Knight III Master Race #3 creating a dark, wrinkly parallel between Bruce and Quar (This glimpse of subtext shows the possibility that Bruce isn’t some aging war hero, but an old man, who sends children to die for him, like Jason Todd, or the suicide bomber in Quar’s cases.), using a nine panel grid and decompression to show Bruce caring for the wounded Carrie, or the powerful full page images of Superman breaking free from the ice angry as hell. But some of Kubert’s work falls flat, like every time the “talking heads” show up, with the exception of a nifty transition between the Batcave computer and Quar ranting.

TV screens as panels was an innovative way to show exposition in 1986, but it has devolved into cliche in 2016. The image of Carrie and Batman trudging through the store a la Nite Owl and Rorschach in Watchmen is much more interesting than Conan O’Brien, clueless morning TV hosts, Donald Trump, and Jon Stewart look alikes commenting on alien invasions.Their portrayal is almost as tone deaf as the parallel scenes of people walking around with headphones and cellphones while the Kryptonians watch over them. It’s yet another “millennials are too self-absorbed to help save the world or do anything” article, but in comic book form. Its cynicism contrasts with Batman taking a young Carrie Kelly under his wing as Robin to teaching the “Sons of Batman” that killing and guns aren’t the true way to uphold justice.

The politics and themes in general are painted with a very broad brush in The Dark Knight III #3, which is the complete opposite of the quiet scenes between Bruce and Carrie broken up by some pulpy narration from Miller and Azzarello. (It’s kind of awkward when he calls her a “goddamn ballerina” when thinking about how she could be a better Batman than him.) From the moment one of the young Kryptonians blows up the Kremlin and kills himself, this group is equated with Al Qaeda, ISIS, or other terrorist groups. Underneath the guise of DC Comics mythology (and with less Islamophobic language), Miller is stealthily doing his Batman vs. Al Qaeda story that was supposedly Holy Terror.  But things get a little complicated when Superman is called a “race traitor” for keeping his Kryptonian brethren trapped in the city of Kandor. Hopefully, we’ve gotten beyond talking about racism in comics using white men as stand-ins, but this confrontation happens towards the end of the issue. 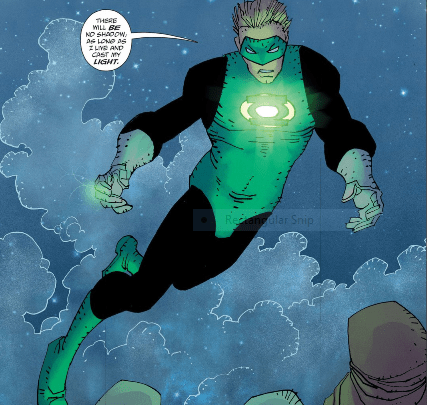 Like the other Dark Knight comics, the storytelling and art style of The Dark Knight III #3 is more compelling than its attempts at political commentary. This especially rings true in The Dark Knight Universe: Green Lantern backup story where former Daredevil: Man Without Fear collaborators John Romita Jr and Frank Miller team up with Miller inking Romita’s pencils to show how the Green Lantern, Hal Jordan, rose to godlike status on an alien planet, but was swiftly brought to Earth by what seems to be the wives of Quar. The line density increases from Hal’s worshipers marveling at him to when he confronts the Kryptonians and finally slips away when he falls in the dust. Colorist Alex Sinclair even channels his inner Lynn Varley to use big splotches of green to depict the world Hal rules over. It’s a simple, chilling Ragnarok narrative that hints at how powerless the old school DC superheroes are compared to The Master Race. And even if there isn’t much context for Hal’s exact, current role, his first appearance is downright Biblical visually and in his dialogue. He is a figure of hope, but this is a middle issue of a Dark Knight comic so hope has to take a siesta for a little while.

When it’s not awkwardly taking shots at texting young people (Or depicting texting in general.), making non-statements about the media, various world leaders, striking up a Strange Fruit-esque conversation about race involving only white people , or turning Bruce Wayne into a Randian hero with Carrie Kelly as his mouthpiece and Superman as his attack dog, The Dark Knight III #3 is an intergenerational superhero epic that boasts Andy Kubert’s best artwork of his career and flaming post-apocalyptic palette from Brad Anderson.