Jonathan Hickman started writing Marvel Comics’ flagship team back in 2012. Marvel was implementing their “Marvel NOW!” imprint across the board, repackaging The Avengers as a shiny new number one. (Which – if you look at the numbers – it’s hard not to call this a strategy to temporarily boost units shipped.) He stated in an interview leading up to the book’s release that Marvel outright handed him the keys to the sandbox, giving him all kinds of room to stretch his legs. After his long-form runs on S.H.I.E.L.D. and Fantastic Four/FF it seemed like a natural progression.

He went on to pen two side-by-side Avengers titles: Avengers and New Avengers. Avengers expanded the very idea of the squad, who it is and what it does. The opening pages featured Stark and Cap discussing the notion of “getting bigger” and we see a glimpse of a roster map that would later be dubbed the “Avengers Machine”. Surreal colors popped off Jerome Opena’s soft, flowing pencils. When New Avengers debuted the tone differed drastically. The newly reformed Illuminati sat around a stone table in a darkened room, discussing the doing the unthinkable to some for the greater good of the whole. The members of the flagship Avengers were (like the rest of the Marvel U) unaware of the doings of The Illuminati, much less its existence. They’d been operating under the noses of The Avengers. Something had to give… and it does in Avengers #29-34.

[***Some spoilers ahead for the entirety of Avengers and New Avengers – though I will try to reveal little, and in a way that does not detract from the enjoyment of the story.***]

Though you will find that very 70’s looking “Original Sin” logo slapped across the top of each of these comics, I get the feeling this was all part of Hickman’s plan from the get go. That’s not to say that this arc, and especially #29, doesn’t tie in nicely with the concept of “Original Sin”. Iron Man, Dr. Strange, and the rest of The Illuminati’s sins are deep and clear, while Captain America’s might just be his naivety. Titled “Infinite Avengers”, it shows Cap dreaming… remembering the conversation he had with The Illuminati about destroying other alternate Earth’s to save our own, and them deciding to wipe his mind clean. Steve is none too happy when he wakes, and assembles a team to confront Stark. A fight ensues and it is revealed that when Cap used the Infinity Gauntlet the ward off the very first incursion of an alternate Earth, the only surviving gem (the Time Gem) somehow embedded itself into Cap. In a flash the entire fight is transported 48 years into the future. 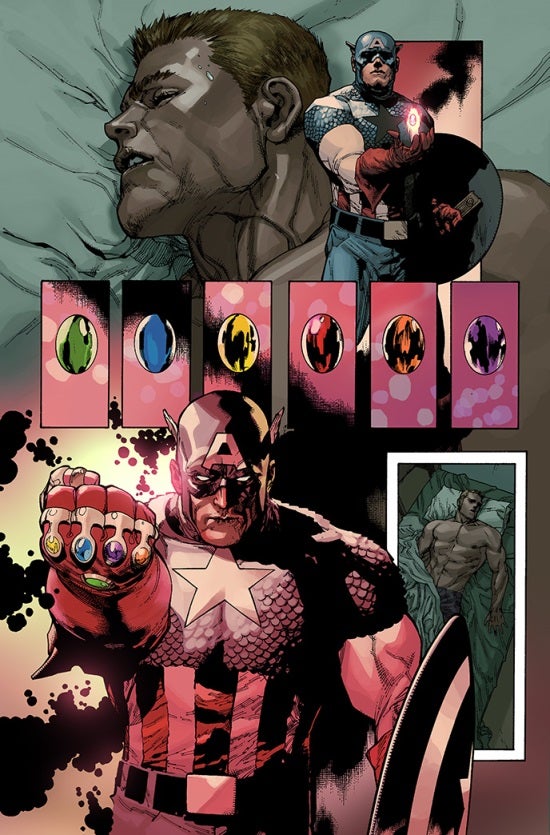 Now, the whole “Captain America and Tony Stark hold differing ideologies and worldviews and ZOMG they’re gonna fight(!)” has been done a lot over the years, particularly since 2000. Mark Millar’s “Civil War” event pretty much boiled down to that concept, stretched into 7 issues. This isn’t quite the same thing though. For one, it isn’t just Stark’s ideals that clash with Rodgers’, it’s the entirety of The Illuminati. Actually, Reed Richards leads the charge in the whole Machiavellian consequentialism thing more than anyone else. Also the clash of ideologies (and the fight itself) is just a device to go someplace else thematically. Literally too, I suppose. It isn’t the meat of the story, it’s merely an aspect of it.

The final page of #29 reads “Betrayal + 48 Years” over a futuristic New York complete with flying cars and Megacity-One-esque sprawl and we’re going, “Whaaa?” What follows however – if you’ve got the patience and want of effort – is some wonderful, very Jonathan Hickman high concept storytelling that enhances the last 50 plus issues of both Avengers titles and builds upon them like an engineer of all things. The next five issues take Cap, his team, and Stark forward through time (again, thanks to the Time Gem). 48 years, 422 years, 5045 years, 51,028 years, and finally “Betrayal + Forever”… a place where time does not apply. The end of the line, as it were. It quickly becomes Cap’s story as each jump loses a couple characters until Cap is alone five thousand years in the future, facing an evolved Matrix-esque A.I. called “The Worldcore”. He is given some great moments to shine. Written as idealistically as days of old but more unpredictably, the Steve Rodgers of this era of Avengers is witty, confident, and quick on the draw. On two separate occasions he is given a choice of two scenarios but surprises even the all-time seeing future Avengers with his choice of another path entirely, throwing a wrench in time itself. It’s nice to see him play the role of wildcard for once, typically reserved for characters like Hulk or Thor.

One of the major criticisms of Hickman’s work is his lack of characterization or humanity. That he conceives these grand storylines at the expense of character development. I agree with that on a base level. Yes, his stuff is typically more conceptual than it is character driven. I don’t really notice though, as I don’t pick up Hickman books off the shelves for character relationships… to me, that’s what Brian K. Vaughan or Matt Fraction are for. That said, the characterization of some of these Avengers is true to their history, and even bold to boot, just in a different way. Hickman puts the emphasis on characters’ philosophies, morals, and ethics rather than inter-team dynamics and relationships. It may come across as cold and obtuse to some, but it works for him and Avengers/New Avengers.

This Avengers arc is drawn by Leinil Yu, with inks by Gerry Alanguilan and a pair of colorists in Sunny Gho and Matt Milla. Typically I’m not a huge Yu fan. He is talented no doubt; but his art feels somewhat poster-ish. It can lack movement and dynamics, for as beautiful as it is. This could be one of the reasons why Yu pencils such beautiful landscapes and cityscapes (often grandiose, from afar)… their lack of movement. His art fits well enough with this arc though: exotic travel, heady discussions, futurescapes. I can’t help but envision a time-spanning Avengers story penned by Jonathan Hickman drawn in a more Kirby-esque way… the art is plenty adequate though. And there are a handful of striking pages that only Yu could draw.

Look, this isn’t the best Jonathan Hickman book on the stands right now (umm… Manhattan Projects and East of West much??). But to see someone like Hickman tell this expansive, intricate, atemporal story with Captain America and his Avengers is very cool to see. He has been building to this arc – which  sets up a reckoning coming for The Illuminati from the recently enlightened Avengers – for some time now, as only he could. And as he and Marvel lead up to something they’re calling “Time Runs Out”, and the release of the next flagship Avengers comic (#35), Marvel Universe and/or Avengers fans would be wise to catch up… sometimes the trip to the island can be more fun than the island itself.