WARNING: SPOILERS. I done spilled the beans on important stuff. Better look away if you don’t want to be disappointed.

Welcome back to another episode of “Hive of Scum”, you scumbags! You’ll notice that instead of reviewing Spidersilk like I promised last time, this is a different comic. Wondering why? The simple answer is your man Scary Cleve went on a bender and in the resulting overdose forgot everything, even what planet I’m on (Pluto, right?). Fortunately, I’m sober again (at least for another hour),  and I promise to get to Spidersilk next time.

This week, we’ve got our first webcomic, Retroblade from Freya Horn, who may or may not be a super artist from the future. Or, you know, she beat up Kyle Reese and stole his time machine to catch an Adele concert.

“In the year 3007 a reality crash has wiped everything out, and the last known survivor Axel Kepler is working his way backwards through time, trying to figure out where it all went wrong. With a severely out of touch Database, a Transmutation Device for food (that, if anything, makes molecules less edible than they were before) and only a cryptic Blueprint left by his sister to guide him, he needs help…He needs a Team. Together, they will find out how to fix things, who the good guys really are… and why people from the future have such cheesy haircuts. ‘Meanwhile’, a few millennia earlier… a young boy named Magnus is bestowed with remarkable powers he was never meant to have, and chooses not to save the world with them.” –from the Retroblade website

Since this is a webcomic, there aren’t covers, so I’ll just skip ahead to the art.

The best part are the colors. Normally, I find a lot of comics, both print and web, to have simple coloring. It’s not bad and it doesn’t devalue good art, but it doesn’t add anything other than to be the correct color. There’s no experimentation.While I wouldn’t call the colors of Retroblade experimental, they’re dynamic like crazy! Colors range in various shades and meld together seamlessly in a whirlwind of psychedelic madness. There’s something about it that feels enhanced, like some kind of augmented reality. You know what? Instead of me blabbering, take a look for yourself. 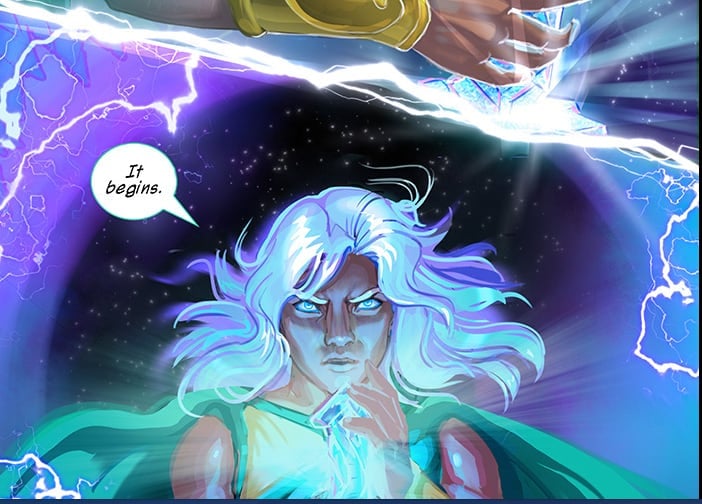 See that art? See those colors? That composition? If you’re not impressed, you don’t know what beauty is!

The panel composition in this comic is damn professional. There is no clutter or poorly placed panels. More importantly, Freya composes them in interesting, unique ways. Some have visual patterns, others have lines designed to look like an object, or they’re shattered and leading into another panel. This is the kind of amazing panel composition that even professionals struggle with or don’t take time to do. I want more of it. More, more, more!

The lettering is really good. Some of the capitalization doesn’t make sense and there are typos, but most of the time it’s used in interesting ways like the art. Word balloons are colored differently for characters: normal white for humans, blue for robots, and red for Alex’s A.I. companion. It differentiates them and helps break up the monotony of having only white balloons. Some lettering is also flipped backwards, faded, and varied in size. All these things have purpose and enhance the reading experience.

At this point, you can imagine I make sweet love to this art and as such, I can point out the flaws. The character design is meh. They’re not bad and are actually 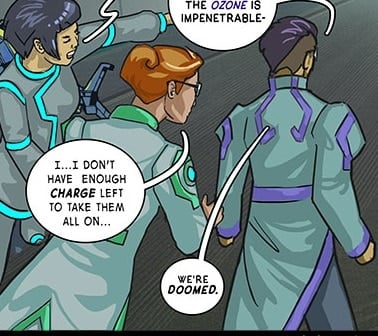 designed well, but they also look blocky and artificial like misshapen toy soldiers. It’s a common problem with a lot of comics, even the professional stuff (I’m looking at you Jim Lee). My suggestion is to smooth out their faces and make them look more animated.

That’s the only flaw though and the rest is like the Mona Lisa and if you don’t like it, suck it. Now, excuse me while I get back to making love.

If you’re worried Retroblade is just a pretty comic with bad writing, put those fears aside. The

writing here is just as good. For one, the world-building is awesome. Freya has created a unique world with a rich mythology. Some bits are fuzzy, but most of it is interesting and easy to follow. What I really find interesting is the incorporation of both fantasy and sci-fi elements. In recent years, there has been an emerging hybrid genre of sci-fi-fantasy comics, a lot of them noteworthy: Saga, East of West, and The Autumnlands to name a few. Diehards from either camp might decry such a fusion, but it helps create new worlds and allows storytellers to play around with the tensions between the two genres that are more complimentary than opposing.

In Retroblade, the illegitimate son of one of the eight universal forces causes the apocalypse, wiping out all but the protagonist Axel Kepler. To save the world, he travels back in time to the futuristic city of Cosmobius. How any of these elements tie together remains a mystery, which I really like.

“But Scary Cleve! I like to know everything at the beginning!”

Well then, you’re a boring shmuck, ain’t ya? Knowing everything means there is no reason to explore the world. The journey to knowledge is always better than

having it right away and it’s the best way to keep readers interested. Let me learn. Let me project and theorize. Give me a big reveal that blows my mind. In short, keep me in the dark for as long as possible.

Freya does this masterfully. Retroblade is still in the early stages, so there are plenty of questions up in the air. Keeping those answers back and letting the reader explore the world is what’s going to make this comic a success in the long run. 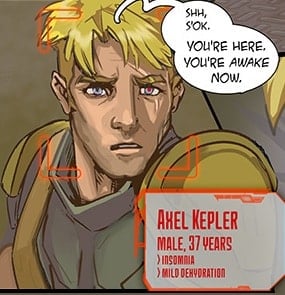 Like the story, the characters are in early stages of development. They are a little stock-in-trade, but they already show interesting personalities. Axel Kepler seems like your typical muscle head action hero, but he exhibits a large range of emotion from joy to depression to humor. His love for his sister and dedication to save the world in her honor makes him a very likeable protagonist. Although he stumbles a lot and gets into bad situations, he is quick to find a solution.

Doctor S, the female lead, is your typical super smart scientist, but she also handles herself really well in a 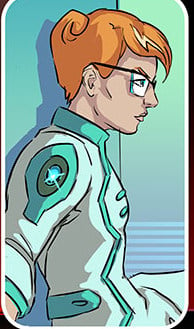 tight spot. She comes prepared to any possible situation and when she hits an obstacle does her best to find a solution.

The only character I don’t like is Doctor M. He seems to be the villain and is very unlikeable, which isn’t bad. The villain should be unlikeable, right? But he’s unlikeable in a bad way. I hated him because of his dialogue. The guy randomly says “Aha” in between sentences constantly and always smiles awkwardly. If the intention was to get my blood boiling over an obnoxious character and fantasize seeing his stupid face pulverized, then Freya succeeded. However, it’s also annoying. I like hating a villain, but I want to hate him because he’s a dirtbag, not an irritating git I want to see very little screen time of.

The other characters are not as developed, but the story is still in the early stages and not all of them have even been introduced. I more than trust Freya to make them more interesting as the story progresses. If not, well thanks for getting my hopes up and crushing them, ya jerk.

One final thing I’ll harp on is that the pacing is a little off. Sometimes this is due to Freya posting holiday posters, special events, or info about a location. The latter is not so bad because it adds to the world, but it also takes you out of the story. Some scenes are not shown but instead recapped. This isn’t necessarily bad, although it would be awesome to see the scenes played out. Also, I was disappointed not to see more of the city of Cosmobius. It looks so unique and would be a great opportunity for Freya to shake her artistic booty, but we only get a few snapshots. Again, it’s still early in the story, so maybe more of the city will be shown soon.

Flaws aside, Retroblade is amazing! Unique concept, great storytelling, superb art that makes inferior art tremble, and brilliant world-building. This comic is still in its early stages, so there is no better time than now to jump aboard. Updates are every Friday, so I suggest you start reading. NOW!

Are we done here? Good. I’m going back to bed with the art. We got sweet love to make.

That’s all for now, scumbags! Come back next time when I finally review Pamela Kotila’s Spidersilk. She’ll hang me by my entrails if I don’t!

Check out her Deviantart.