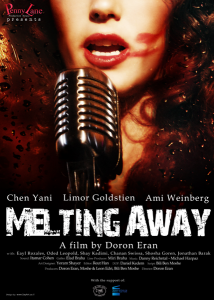 Written and directed by Doron Eran

It’s rare to see something you’ve never seen before, and even rarer to see something that you categorically have. Doron Eran’s Melting Away, a story about a family rocked by cancer and transexualism, falls into the class of the latter. Schmaltzy, saccharine, and emotionally manipulative, Melting Away, despite its conspicuous flaws, still warms the heart with plenty of cheese.

When Schlomo (Ami Weinberg) and Gayla (Limor Goldstein) discover that their teenage son, Assaf, is hiding girls’ clothing under his bed, they decide to lock him outside in the rain as a punitive measure. Overcome by the situation, Assaf decides to flee from home, and, during his years in exile, transitions into being Anna (Hen Yanni), a transsexual cabaret singer and artist (can you sense the metaphor?).

When Schlomo is diagnosed with cancer, Gayla tries to orchestrate a reunion through a third party, but when Anna arrives at her father’s bedside, she panics at the last minute, hiding her secret from her father and the rest of her family. Under the guise of being a nurse, Anna tries to take care of her father, while, at the same time, searches for acceptance, happiness, and contentment.

From the very beginning, when the situations are posited, the ending is never in doubt. Although presented with the upmost earnestness, the film’s subsequent tone foreshadows a Nicholas Sparks type of film with a Nicholas Sparks type of ending. The movie never deviates from its preordained path to the finish, which is a shame because a Lars von Trier type treatment would’ve been far more compelling.

Nevertheless, the film is what it is – which is to say, fairly predictable. Along with having a narrative purpose, the story also acts as a lecture from the pulpit, sanctimoniously preaching ideas of understanding, tolerance, and compassion. Although there is nothing wrong with this per se, the film does this with an incredibly heavy hand, manufacturing characters and set pieces to flagrantly get their point across.

These sequences detract from the film’s continuity and flow, as well as being incredibly hackneyed and unimaginative. They act as a symptom of the film’s raison d’être‬, which, of course, is to be overly sentimental.

There are a vast amount of logical inconsistencies and breaks in the suspension of disbelief (like an unqualified nurse taking care of a cancer patient without repercussions), and the same, sappy piano score can make the film seem repetitive. But even so, Eran is still able to make us care for the characters, especially Anna. With so much heart tugging and fifty different kinds of cheese, Melting Away eventually succeeds in its war of emotional attrition. We know exactly how the film is going to play out, and how Anna’s story will come to an end, but despite this, there’s still an inexplicable urge to cheer for her.