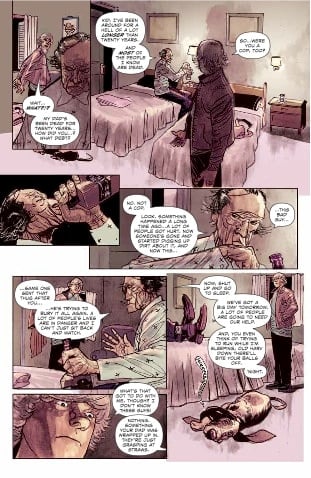 The Last Contract #2 (of 4)
Written and Lettered by Ed Brisson
Art by Lisandro Estherren
Colours by Niko Guardia
Published by Boom! Studios

The first issue of The Last Contract introduced the main character without a name, designated only as ‘The Man.’ He was last left off on the hunt, forced out of retirement, for a blackmailer who holds some information that ties The Man and a fellow criminal named Burrell amongst others to a list of hits that, if publicized, would reveal their hidden businesses. The Man saved the life of a Dillon Williams at the end of the first issue with whom he has brought along to figure out who exactly the mystery blackmailer is.

Ed Brisson’s script continues to flow along nicely with natural sounding dialogue and is paced quite well during this slower issue, with small comedic and surprise moments. The cinematic feel carries over from the first issue that is due in thanks as well to the framing selection of Brisson and/or Lisandro Estherren. Multiple scenes play out with a cinematic eye in mind, respecting and utilizing the spaces that the characters find themselves in; from the diner in Oshawa to the sketchy hotel that The Man and Dillon stay at, the detail, as roughly as it is drawn at times, really makes it feel like a lived-in world.

Frames are also utilized and placed to speak for themselves without any need for dialogue, which can be a difficult thing to feel natural without a decent artist and letterer (which Brisson helms the duties for). One great scene even showcases Brisson and Estherren’s comedic timing during a back and forth dialogue between The Man and Dillon in the hotel. Dillon asks The Man if he was a cop once, as The Man sits on one of the beds with a bottle of liquor in his hand. The next frame, a tight close up on The Man with a black backdrop and the bottle of liquor meeting his lips, answers to the reader what is already known: he has a very dark and rough past. 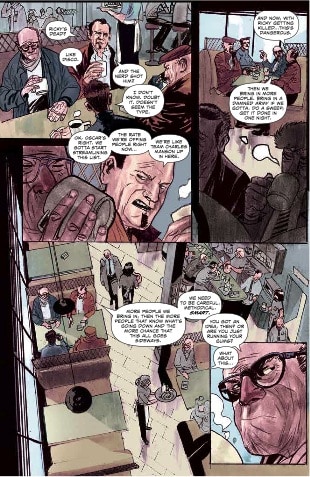 Estherren’s strong suit definitely lies in more firm close ups of the characters faces. He does a good job at matching the emotion of Burrell and his sons when they comes across frustrated by The Man’s involvement in their business or the annoyed faces that The Man makes when Dillon asks dumb questions. His rough and ridged pencil job is overall suitable for the unclean nature of the criminal underground backdrop of The Last Contract. Estherren also creates the grungier environments better than the cleaner places, such as the seedy hotel where he really draws a sense of ill kept walls with the cracks and stains of time.

Niko Guardia’s colours, as already mentioned in terms of the framing, add a lot to the tense, noir world of The Last Contract. He uses single colours to heighten the meaning of a single frame like the black in the hotel scene and red during The Man’s memory sequences to remind him of his violent past. Guardia’s colours have this washed or rubbed over look to them that feels more natural during the more heavily shadowed sequences compared to the brighter, daylight settings. The colouring at times actually makes it appear as if the criminals are out of their comfort zones and are more vulnerable compared to the darkened shadows of nightfall.

The Last Contract #2 continues the curious journey of who exactly is blackmailing these criminals and points fingers at everybody as potential withholders of information that could lead to substantial leads or become valuable to protect oneself. If one thing is certain in this world, nobody can be trusted. If there is any consideration for The Last Contract as a filmic adaptation, Peter Weller would be perfect as The Man.

See also  Lauren Anne Miller and Ari Graynor want you to know that 'For a Good Time, Call...'