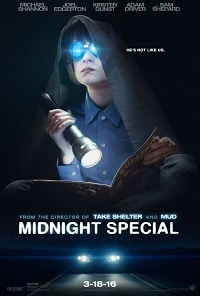 Jeff Nichols’s new sci-fi thriller, Midnight Special, is like a masterclass in mood and style.  Though it certainly feels like a spiritual cousin to Spielberg classics like Close Encounters of the Third Kind and E.T., this is a decidedly realistic and low-key affair.  Sure, the script has plot holes big enough to drive a spaceship through, but the look and feel of this world is just too impressive to care. Midnight Special is the kind of thoughtful sci-fi that helps keep the genre alive.

Alton (Jaeden Lieberher) is a little boy who knows too much. Stolen away from his father Roy (Michael Shannon) and mother Sarah (Kirsten Dunst) by a weird religious cult, Alton delivers cryptic messages and random map coordinates that are recited as scripture by the congregation.  When Roy and his best friend Lucas (Joel Edgerton) escape with Alton in the middle of the night, everyone from the cult’s leader (Sam Shepard) to an NSA decoder (Adam Driver) join the chase.  Alton’s “gift” grows more unpredictable as they race toward a mysterious rendezvous with the truth about his powers.

Part road movie, part mind-screw, Midnight Special barely slows down long enough to take a breath.  Writer-director Jeff Nichols (Take Shelter, Mud) has no intention of pandering to the audience, either.  He packs his story with enough little details to clutter your brain with tantalizing questions.  Why can’t Alton be in the sunlight?  How admirable are Lucas and Roy’s objectives?  Is that really Kirsten Dunst?  Not every question is meant to be answered.  Like any good sci-fi yarn, the joy is in the journey to find out.

The trajectory of Nichols’s storyline certainly owes much to Close Encounters of the Third Kind, E.T., and to a lesser degree, Firestarter.  The execution, pacing, and tone of Midnight Special, however, couldn’t be more different.  This is a somber piece that laments the misfortune of this fractured family rather than reveling in the hysterics of its disintegration.   “These are ordinary people under extraordinary circumstances,” never rang so true.  When Roy cradles Sarah and Alton in his arms, there is a genuine connection that makes all their questionable decisions seem necessary and vital.

Nichols doesn’t get too crazy with special effects, using them to strategically punctuate scenes rather than making them a centerpiece. When the spectacle finally arrives, it feels like a jolt of adrenaline, not the prequel to a videogame.  Nichols insists upon keeping his characters at the forefront of the action, even when the sky suddenly rains down fire down around them.  Also gone, mercifully, is the bombastic soundtrack that accompanies most sci-fi these days.  David Wingo’s atmospheric score, starting from a single piano riff that expands to ethereal proportions, is a complementary piece of understated power.  Hans Zimmer can have the next sci-fi actioner; Wingo has this one covered.

Unfortunately, Midnight Special has a few too many plot quibbles to join the ranks of sci-fi classics.  Experts solve puzzles they have no business deciphering, while a critical plot thread simply dissolves away without resolution.  One can make a compelling argument that these oversights are deliberate; an attempt by Nichols to defy our expectations of mainstream science fiction movies.  We’ve been conditioned to expect cataclysmic finales, where all the principle characters converge to have a mindless punch-fest.  It’s admirable that Nichols refuses to play along with these conventions, staying focused on the emotional underpinnings of his story, but his script is still unjustifiably scattershot. 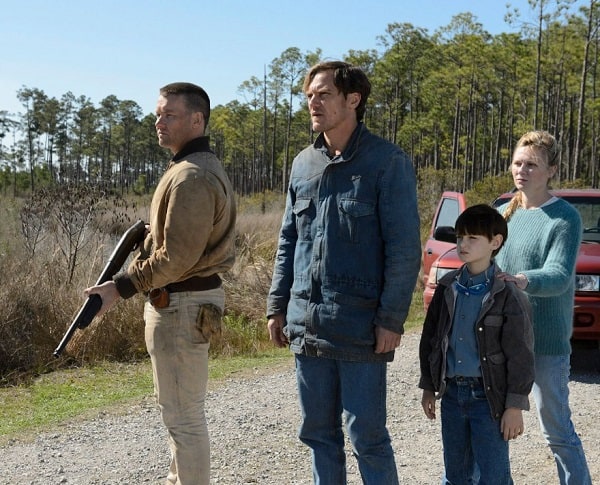 Strong performances cover most of the plot inconsistencies. Michael Shannon continues to be a fascinating screen presence capable of anchoring everything around him.  Lieberher adds to his impressive résumé as the thoughtful Alton (see: The Confirmation for confirmation of his skill).  He does a great job being nonplused by the chaos, and is more than capable of taking command of the situation when the adults falter.  Dunst and Edgerton provide stability around the edges of the story, and Sam Shepard is good… like he always is.  It feels as though Driver’s sympathetic expert gets shortchanged, perhaps the unfortunate victim of pacing and editorial ruthlessness.  Still, Driver manages to inject some much needed humor into the festivities.

Midnight Special is the type of emotionally compelling science-fiction that Hollywood needs to make again. The human component has been lost in a blur of spectacle and noise.  When these quietly powerful films bubble to the surface—films like 2015’s stellar Ex Machina—serious moviegoers inevitably respond with enthusiasm.  It’s also another assured step in the directorial career of Jeff Nichols, who successfully melds moody character drama with genre filmmaking.  There are a few hiccups with the script, but Midnight Special has ample heart and smarts to become one of the sci-fi sleepers of 2016.