Because the big game is coming I thought it would be fun to explore some of the movies that I think of when I think of football. Some of them are light and fun, others, however, challenge the strange relationship I have with the almost-embarrassingly violent game I love. When compiling this Top 5 Football Movies list I avoided documentaries, though you can’t really go wrong with anything from ESPN’s 30 for 30 series – most of which are available to stream on Netflix right now. It should also be noted that I can’t include Debbie Does Dallas for obvious site-related reasons, but it truly is a classic.

If you’re still bummed about Rick Moranis turning down a cameo in Ghostbusters, and would like to be transported back to the halcyon days before terms like chronic traumatic encephalopathy existed – you can’t really go wrong with Little Giants. After his clearly talented daughter is denied a spot on the town’s peewee league football team due to sexism, Moranis decides to make his own team. What the team lacks in size, athletic prowess and general football IQ, they make up for with heart and determination. While it’s typical family fare centered around a cliched underdog sports story, Little Giants still manages to charm thanks to Moranis, a genuinely humorous cast of kids, and Modern Family’s Ed O’Neil as the smarmy rival coach who takes the game way too seriously. 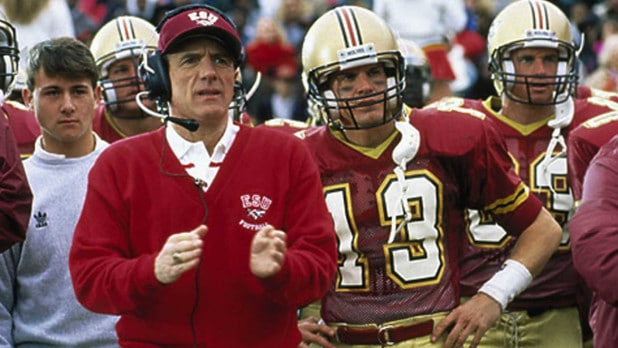 The strength in The Program is that it perfectly expresses the contradictory nature of football. Following a group of players on a college football team coached by an apt James Caan, The Program touches on campus rape, steroid abuse, and the tragedy of players losing their ability to make money in the pros because of injury in college. Up until this point there hadn’t been many films that actually depicted the corruption of NCAA sports. Blue Chips (1994), the more memorable basketball equivalent starring Nick Nolte, wouldn’t come out until the following year. The nation’s relation with football is possibly best embodied by Andrew Bryniarski’s Steve Lattimer. The lineman is charismatic and likable, but is also abusive to women and a steroid abuser. How is this possible? Lattimer seems himself a victim of the entitlement that comes with being a star football player. Even the father of the girl he tried to rape has the charges dropped because he’s a booster for the football team. Who can blame him for thinking that behavior like that is acceptable? Bryniarski manages to imbue Lattimer with a child-like playfulness that makes him more pathetic than detestable. He’s what happens when no one tells their kid no, which is often the case for a lot of football players. This is how Johnny Manziel happens.

See also  EIFF 2013: 'Sanctuary' is better when it stays simple 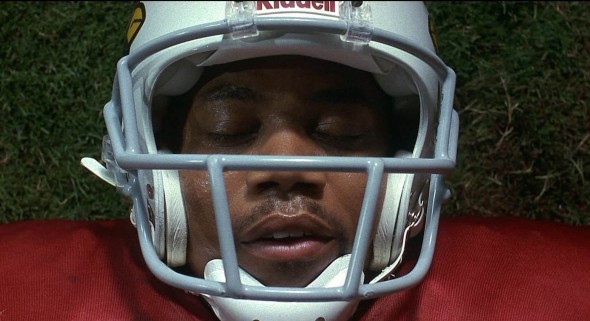 Beyond the sometimes gooey romance elements, Cameron Crowe’s 1999 film effectively leverages the systemic exploitation of players for cash as a cause for existential crises. Realizing his complicity in an industry that treats players as disposable commodities, Tom Cruise’s superstar sports agent Jerry Maguire has a mental breakdown (or is it break through?) and loses his job. Starting over with only one client, the egotistical Rod Tidwell, Jerry has to figure out how to manage being a compassionate human being, while remaining a successful capitalist in business where compassion results in less profit. Cuba Gooding Jr. and Regina King steal the show as Rod and Marcee Tidwell; their love and support of one another is truly beautiful and provides the film with the soul it’s searching for. 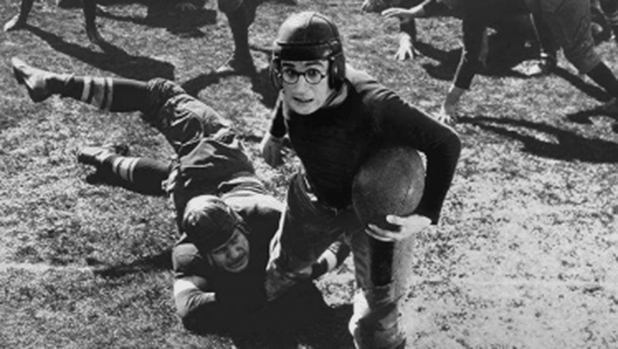 It’s quite amazing to watch Harold Lloyd’s silent comedy 91 years later (91! I don’t think I have relatives that old anymore) and see how not much has changed in the psyche of students moving from high school to college. Lloyd’s character decides that college is where he’ll reinvent himself, having watched movies depicting university life as a Utopian institution where the awkward teenager can become the person they always wanted to be. Lloyd becomes popular by buying his friends ice cream (this still works today, right?) and throwing parties, not knowing that they’re laughing at him instead of with him. Lloyd trying to earn a spot on the team by replacing the tackling dummy for a practice is tragically comic and mocks the absurdity of a sport in which grown men hurl themselves at each other like torpedoes for fun. When you think of it, it’s kind of amazing that this is even still a sport while people make fun of lawn darts for having ever been a backyard pastime. While it’s not necessarily a “pure” football movie (which is why it’s second on the list despite being the best overall film), the centerpiece of the film revolving around Harold Lloyd’s character trying to win the big game is one of the great cinematic set pieces of the silent era, or any other for that matter. 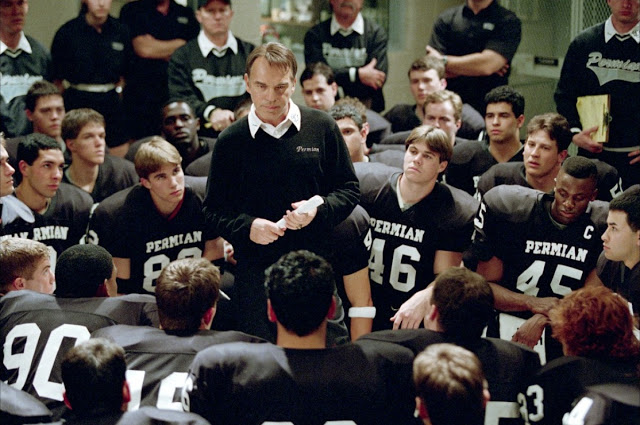 The beauty of Friday Night Lights is how it manages to find emotional nuance despite everything working against that goal. The post-classical editing and inspired score from Explosions in the Sky make the film about a small town high school football team feel almost operatic. The game of football itself demands a high intensity of emotions. But by using a cinema verite style of movement, we feel the camera in constant search for the more deeper truths on the faces of the cast. Billy Bob Thornton and director Peter Berg work to subvert expectations, particularly in the coach’s “big inspirational speech” at the end of the game. Instead of making the moment a centerpiece moment for a scene-chewing actor, Thornton appeals to his players’ humanity instead of their ego. The beauty of football, if one can still find it, is in watching a group of individuals push past their limitations and personal desires to achieve the goal of one harmonious unit. Friday Night Lights manages to explore that while remaining fully aware of the damaging effects of its masculine bravado.