In director Noah Baumbach’s 2014 film While We’re Young, Ben Stiller’s ageing Generation-X’er is fawning over the supposedly “democratic” pop-culture tastes of his new-found millennial friends. With a video collection where The Goonies rubs shoulders with Citizen Kane, a representation of the meeting of low art and high art if there ever was one, Stiller’s friend merely responds “When did The Goonies become a good movie?” Baumbach may have used The Goonies as a cheap punchline, an outdated pop-culture reference that only adds to the Millennial characters’ fetishisation of the technology and culture of the recent past, but it also highlights a far bigger generational divide.

To those who grew up with The Goonies, there was never any doubt that it was always a good movie. But for anybody who saw it with adult (i.e cynical) eyes on first viewing, it was clearly the most problematic film to emerge from the Amblin Production House during its 80’s heyday, even if initial reviews were mixed-to-positive. Instead of quickly becoming outdated, The Goonies has never once threatened to become anything other than a cultural watermark for the millennial generation, no matter how much it laughs in the face of political correctness. It can never be considered “high art”, but then why should it be? Even if Spielberg was the prime producer of quality youth entertainment in the eighties, he never attached his name to a film that felt more like a realistic portrayal of how kids actually speak.

Littered with casual swearing, Chris Columbus’ screenplay was seemingly designed to alienate parents and endear younger audiences. It wasn’t trying to be outrageous, but to sell its unashamed fantasy in a way that every child in the audience could imagine being part of the story- although with this being a Spielberg production, it is still an idealised version of childhood. Even if this version of an idealised childhood focused on one of the Goonies being frequently “fat-shamed” for laughs. Instead of becoming an embarrassment to the film as a whole when watched retrospectively, the “truffle shuffle” feels oddly of-a-piece with the kids-running-amok sensibility. Adults should of course feel sensitive about childhood obesity being made fun of- but a child isn’t sensitive to such issues. 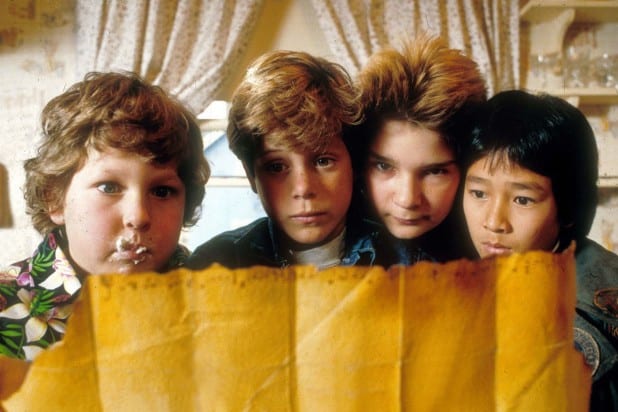 Of course a child would lovingly bully their friend for being overweight- political correctness (and to a certain extent, the differentiation between right and wrong) is no concern to them. Although many would argue that the media consumed by younger audiences has a need to promote moral values, any such elements would feel alien here. But the character of Chunk, a character name that would generate dozens of think-pieces alone were this film released today, exists for reasons that should generate even deeper cynicism in older audiences. It is easy to argue that an overweight character was solely included to disguise the lack of narrative purpose afforded to the continued product placement; within the opening ten minutes of The Goonies, audiences are treated to repeated Pepsi advertising that doesn’t cease throughout the entire movie.

In addition to that, the friendship between Chunk and Sloth is solely because of Chunk’s desire for a Baby Ruth chocolate bar. On the more savoury side of things, Chunk’s love of pizza culminates in his mother getting him a Domino’s Pizza as a reward at the film’s end (the entire list of the food Chunk eats can be found here). Yet the narrative is set in place by the homes of the Goonies being foreclosed to make way for an esteemed country club for the privileged few. Instead of setting up a criticism of mid-eighties Reagan fiscal policy, the movie merely feeds into the love of big brands through continued product placement. To adult viewers, especially cynical ones, there is a dark political irony inherent in the marriage between narrative and superfluous commercialised content that ensures the film doesn’t hold up. But through a child’s eye, the desire for high-calorie junk food has absolutely no relation to the richest people in society tearing down your neighbourhood, even if both are ideas generated by the 1%.

This advertising for big brands (and the repeated ideal that a child would be happier with their high-fat produce) is sadly still commonplace in movies today. Unlike most films today, The Goonies more than makes up for its shady commercialised ideals with a genuinely fun adventure that still holds up. In fact, it is tantamount of director Richard Donner’s lightness of touch that the film doesn’t become a carnival of moral depravity, even if its attempts at product integration leave a sourer taste in the mouth than the Reese’s Pieces advert so integral to the plot of E.T.

Amongst many elements that would be controversial were they to be handled with even the slightest bit of difference, we have the character of Sloth; a character with a severe facial deformity, whose disability is still treated as a figure of fun. But again, filtered through the eyes of a child, they wouldn’t know how to act when faced with somebody (initially presented as a villain, no less) who was so visibly “other” to them. This doesn’t mean the film should be let entirely off the hook, as it has created a deliberately outlandish character for the audience to laugh at and not with. But The Goonies emanates a peculiar sense of nostalgia that renders many devotees “apologists” instead of fans- there is so much wrong with it, thematically and politically, that for many audiences it is hard not to perceive it as anything other than a guilty pleasure.

As the decades have passed, there have constantly been rumours of a sequel; but The Goonies, whilst not exactly being a relic of the past, is such a particular evocation of a time and place that it would never work. Its most beloved elements are far easier to hold up to scrutiny now, with a more conservative movie ratings system never allowing a child to witness something akin to this even if it were green lit. So why does The Goonies hold up, even if it should be long-dormant in the pop culture canon? Its simple: the magical realism every child imagined beneath mundane suburbia is realised in a way far more thrilling (and far less sentimental) than other Spielberg-produced films of that era. Those films may have been higher in quality, but they didn’t have a portrayal of childhood as desirable as the one Richard Donner portrays here, with the idea that fun gadgets, pirate treasure and a fight against bad guys could all happen in your neighbourhood, hidden from view. Audiences may look back on “The Truffle Shuffle” in embarrassment, but the childhood sense of adventure The Goonies provokes is far stronger than any of its worst elements; a sense of adventure that means this un-PC anomaly of a film will continue to have longevity for generations to come.